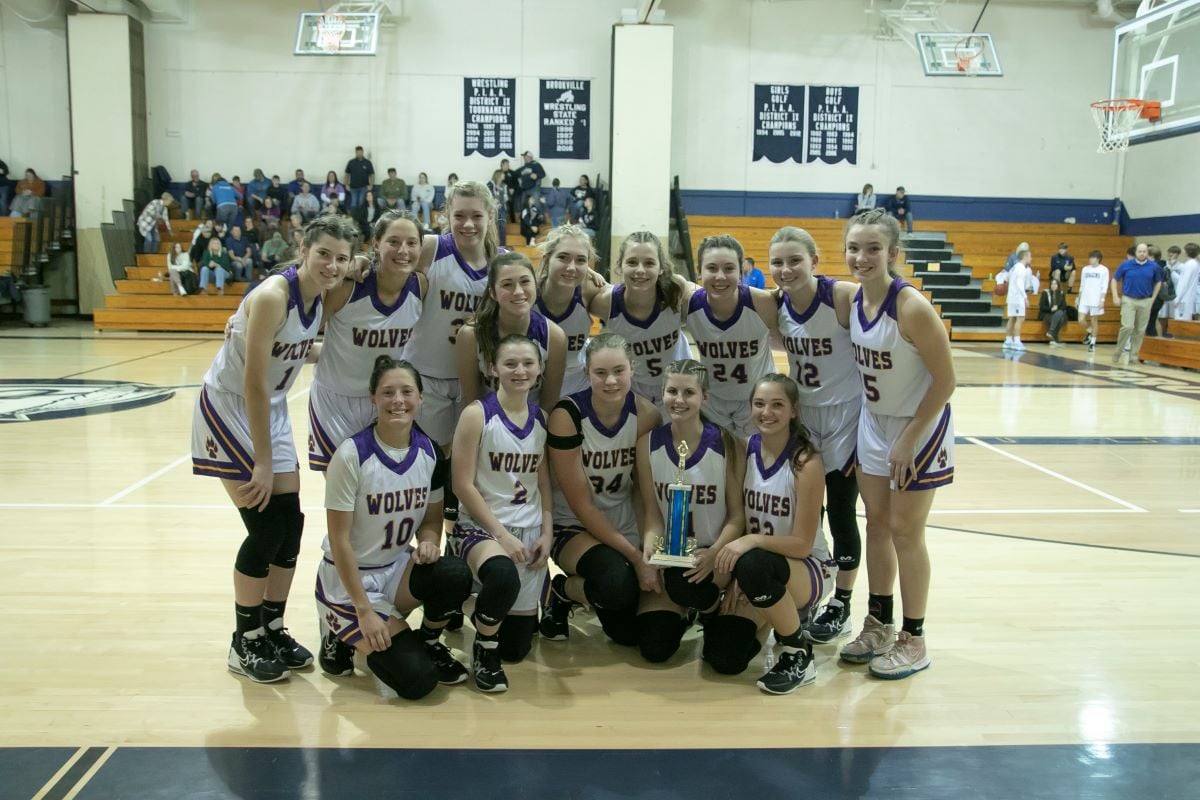 BROOKVILLE, Pa. – Lauren Lutz controlled the paint finishing with 17 points and 10 rebounds to lead North Clarion to a 42-30 win over Clarion-Limestone in the Brookville Tip-Off Tournament Championship game.

Lutz earned the Tournament MVP while Madison McFarland also earned an all-tournament nod. She scored four points but was among a balanced team effort that didn’t have another player in double figures. Maria Bauer and Emma McFarland each scored six points.

The She-Wolves trailed C-L, 17-10, halfway through the second quarter, but they closed the half with a 13-4 run for a 24-21 halftime lead and led the rest of the game.

Brookville led the Lady Bison, 21-17, following a Reggan Olson 3-pointer with 3:59 left in the second quarter, but Clearfield closed the half on an 8-0 run and never trailed the rest of the way.

FRANKLIN, Pa. – Mylee Harmon and Alivia Huffman combined to score 65 points while both scoring at least 30 points in a 78-43 Redbank Valley win over Conneaut on the second day of the Franklin Tournament.

Harmon led the Lady Bulldogs with 35 points and has now scored 72 points in two games with Huffman adding 30 points.

BROCKWAY, Pa. – DuBois rode a hot start to a 39-30 win over Moniteau in the championship game of the Brockway Tip-off Tournament.

BROCKWAY, Pa. – Trailing by a point going to the fourth quarter, visiting Clarion got five points from Gia Babington and four from Taylor Alston to rally past Brockway, 23-16, in the consolation game of the Brockway Tip-off Tournament.

The Lady Cats were down 13-12 entering the final eight minutes but outscored the Lady Rovers 11-3 in the frame.

Babington and Alston both scored eight points to lead Clarion.

MARIENVILLE, Pa. – Tournament MVP Amber Guzzi had 19 points, seven rebounds, and seven steals to lead Forest Area to a 40-35 win over Youngsville in the championship game of the Forest Area Tip-off Tournament at East Forest.

Madison Vanguilder and Milea Jenkins each had nine points for Youngsville.

DUKE CENTER, Pa. – Otto-Eldred jumped out to an 18-2 lead after the first quarter and never looked back in a 44-14 win over Bradford in the Randy Stebbins Memorial Tournament title game.

Katie Sheeler scored 17 points on her way to Tournament MVP honors and talked about the win afterward.

Anna Merry scored all nine of her points in the first half for Otto-Eldred, while Brooke Close added eight.

“We didn’t play great, there are definitely some things we can improve upon,” said Otto-Eldred coach Shawn Gray. “We shot the ball well in the first quarter, and a win’s a win.

“We have a nice non-conference schedule this season with some quality teams,” Gray said. “We have ECC on Friday and that will be a big one.”

Chloe Yazembiak also had a big game for Northwestern with 18 points.

GALETON, Pa. – Ella Brewer and Isabella Rees each scored 15 points to lead Austin to a 48-17 win over Galeton in the consolation game of the Galeton Tournament.

Kadence McKeirnann grabbed 10 rebounds in the win for the Lady Panthers with Rees coming away with seven steals, grabbing six rebounds, and handing out four assists. Brewer also had four assists, five steals, and five rebounds.

KARNS CITY, Pa. – Lia Krarup scored 10 of her game-high 18 points in the first quarter to lead Wilmington to a 62-45 win over Karns City in the consolation game of the Karns City Tip-off Tournament.

Emma Dailey had 16 points while going 10 of 13 from the free-throw line for Karns City with Brooklyn Taylor also scoring 16 points. Chloie Fritch chipped in 11 points for the Lady Gremlins.

Megan Pellertino and Aarlyn Nogay each scored 14 points for the Lancers with Camdyn Cole adding 13 and Marian Haggerty chipping 12 tallies.

DCC recaps are powered by Pizza Hut in DuBois.

SUGARCREEK BOROUGH, Pa. – Jadyn Shumaker, Mariah Wessell, and Allie Rembold each scored 10 points to lead Cranberry to a 55-11 win over Rocky Grove in the consolation game of the Roy Sanner Tip-off Tournament at Rocky Grove.

The Lady Chucks overcame a slow start that saw them trail 18-13 at the end of the first quarter by scoring 19 second-quarter points on their way to a 32-26 halftime lead.

Danielle Griebel also had 11 points and nine assists in the win.

WARREN, Pa. – Sadie Thomas scored a game-high 20 points and Savannah O’Hara had 17 to lead Maplewood to a 62-32 win over Keystone in the consolation game of the Warren Tip-Off Tournament.

Cambridge Springs outscored West Middlesex 17-4 in the third quarter on its way to the win.

Alexa McDole added 13 points for Mars in the win.

McBride also had six rebounds and dished out four assists in the win.

HARMONY, Pa. – Caylen Spano scored 19 points to lead McDowell to a 48-38 win over Hampton in the championship game of the Seneca Valley Tip-Off Tournament.

Estella Adams had 12 points and six assists for the Lady Knights, while Jenn Blum had 10 points.

Lauren Konkol added eight points for Seneca in the win.

FAIRVIEW, Pa. – Behind 18 points from Brooke Przybylski, Harbor Creek raced to a 56-27 win over North East in the Fairview Tip-Off Classic.

Samantha Zank added 12 points for Harbor Creek in the win.