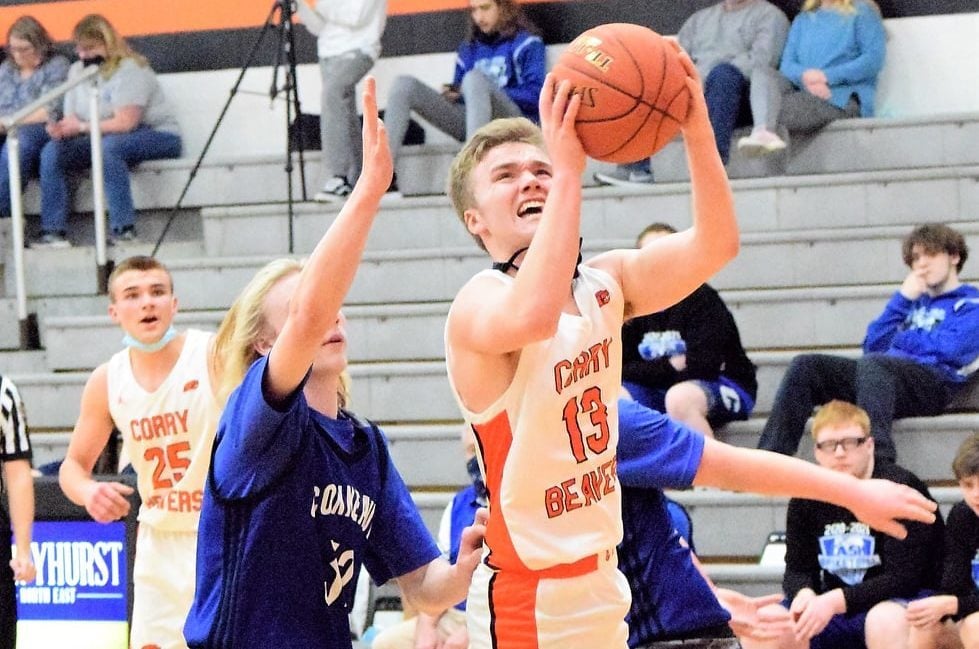 Corry's Logan Joncas had 32 points, including nine threes in a 66-51 win over Eisenhower. File photo by Jeff Parkin.

WARREN, Pa. – Layveon Gore scored 19 points as Erie pulled away from Warren in the second half for a 65-46 non-region win.

Gore, who scored 11 of his points in the second half, was named Icyy Ink Player of the Game and talked about the win afterward:

Jay Smith knocked down a pair of third-quarter threes for the Royals, scoring 12 of his 17 points in the second half. Kre Thompson scored 11 of his 14 points in the first half for Erie.

Parks Ordiway got off to a hot start for Warren, scoring 13 of his 15 points in the first half, while J.T. Blum scored 12 points for the Dragons. Starting point guard Tommy Nyquist made his season debut for the Dragons, scoring six points, while Bryce Blair also had six points.

CORRY, Pa. – Logan Joncas scorched the nets for Corry, erupting for 32 points, including nine threes in a 66-51 win over Eisenhower in the opening round of the Jim Gruca Christmas Tournament.

Joncas drilled eight of his nine threes and scored 29 of his 32 points in the first half, as the Beavers built a 38-23 halftime advantage.

Rylan Smith was also in double figures for Corry with 12 points, while Cody Reedy added nine.

Stull finished with 17 points, none bigger than the last two.

Landon Haggart had 15 points and Nathan Greer 12 for the Eagles.

Jayden Davis had a big game for Chartiers Valley with a game-high 26 points, while Frank Dervanik finished with 15.

SHARON, Pa. – James Sitter scored 21 points and Logan Frazao hit the the go-ahead bucket in the fourth quarter of Fairview’s 46-44 win over Howland.

Sitter made four threes, while Frazao finished with nine points as the Tigers remained unbeaten.

LINESVILLE, Pa. – Jalen Ritzert poured in 24 points as Greenville earned a 58-38 win over Conneaut in the opening round of the CASH Christmas Tournament.

The Trojans built a 32-17 halftime lead en route to the win.

TITUSVILLE, Pa. – Matthew Bennett scored 20 of his 23 points in the first half as Union City picked up its first win of the season, 65-48 over Titusville.

Wyatt Post had 12 points for the Bears and Kyler Shaffer 11.

SARVER, Pa. – John Sabo knocked down five threes on his way to a game-high 22 points as Slippery Rock knocked off Redbank Valley in the Freeport Tournament, 57-37.

Dylan Gordon was also in double figures for the Rockets with 13 points, while Jacob Wolak added nine.

The Rockets outscored the Bulldogs by 11 in the third quarter after building a 27-19 halftime advantage.

North East outscored Northwestern 16-9 in the fourth quarter en route to the win. Ryan Mayes added 11 points for the ‘Pickers, while David Gibson had 10.

Cam Perkins led three Northwestern players in double figures with 17 points, while Eric Steinle and Ryan Tewell had 12 and 11, respectively.

CORRY, Pa. – General McLane outscored Southwestern by 16 in the first quarter on their way to a 71-49 win in the opening round of the Jim Gruca Christmas Tournament at Corry.

NEW CASTLE, Pa. – Pierce Nagel led three Wilmington players in double figures with 15 points as the Greyhounds earned a 48-46 win over Hillcrest Christian in the consolation game of the Neshannock Tournament.

Iroquois, which also got 19 points from Ben Burkhardt, jumped out to a 10-point lead in the first quarter on their way to the win.

Maplewood’s Luke Sleeman had a big game, pouring in 25 points.

LINESVILLE, Pa. – Germeia Dell’omo scored 15 points and Austin Shady 13 as Girard beat West Middlesex, 56-34 in the opening round of the CASH Christmas Tournament.

Girard outscored the Big Reds by 15 in the second half on their way to the win.

The Wolverines led 29-25 at halftime and outscored the Eagles 23-13 in the third quarter en route to the win.

Lucas McNeal tallied 13 points for the Wolverines, while Connor Finch had 11 and Tony Richards 10.

Koby Hendrickson had a strong game for Youngsville, scoring 10 of his 14 points in the second half, while Nathan Lucks added nine and Keegan Mesel eight for the Eagles.

Dec. 29, 2021 D9 Girls’ Hoops: North Clarion, Clarion-Limestone Claim Tournament Titles
Dec. 29, 2021 D9 Boys’ Hoops: Srock has Monster Double-Double in DCC Victory; Cameron County Edges Clarion
We use cookies on our website to give you the most relevant experience by remembering your preferences and repeat visits. By clicking “Accept All”, you consent to the use of ALL the cookies. However, you may visit "Cookie Settings" to provide a controlled consent.
Cookie SettingsAccept All
Manage consent