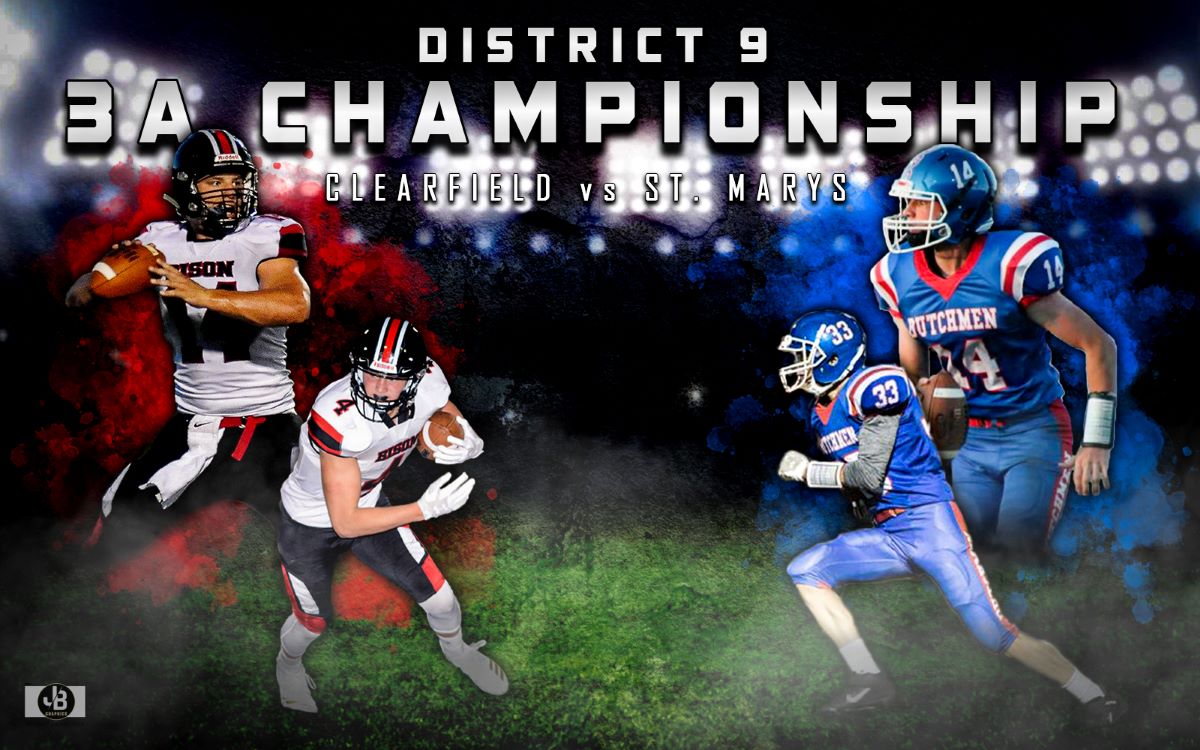 Get all your playoff information at the D9and10Sports.com Football Playoff Hub

There’s a championship game leading the schedule as Clearfield and St. Marys square off for the Class 3A title Saturday afternoon at Brockway’s Varischetti Field at 1 p.m.

In Class 1A and 2A, it’s a semifinal weekend with three games Friday night and one Saturday afternoon.

Friday night, both Class 2A games are scheduled with Brookville hosting Ridgway and Karns City traveling to take on Central Clarion County at Clarion University’s Memorial Stadium starting at 7 p.m.

Check out the brackets here.

Here’s a closer look at the games:

With so few games to examine this year, it could be an interesting matchup between the two former District 9 League rivals. St. Marys has run the table with two wins apiece over Kane and Ridgway and the other against Bradford. They’ll meet out of the IU9 Bubble at Brockway’s Varischetti Field.

Clearfield didn’t play their second game until October after its season-opening win over Penns Valley on Sept. 11 because of COVID-19 concerns. The Bison also have wins over Philipsburg-Osceola and Huntingdon last week with their loss coming to Central-Martinsburg, 25-21, two weeks ago.

Head coach Tim Janocko is in his 36th season with the Bison, owning a 287-115-3 career record. That’s the most wins ever by a D9 coach and counting.

The Dutch are coached by Chris Dworek, in his second year with the Dutch. His first year at 6-5 ended a two-year stretch of winless seasons. He won 107 games in 19 seasons at Brookville from 1996 through 2014.

Saturday’s winner gets District 5’s Bedford Oct. 30 or 31 at home at a time to be announced.

The week started with some intrigue as Union High School put out a release stating that, “Union School District was contacted and made aware that a person at the high school level has been in close contact with an individual who has tested positive for COVID-19. Through close communication with the Department of Health, this individual has not been classified as a presumed positive case and those who have been in close contact with him/her are not recommended to quarantine at this time.”

Monday’s practices for all sports teams at Union or in this case Union/ACV’s football team were canceled, but nothing has changed regarding the status of Friday’s game. Union Athletic Director Scott Kindel indicated Tuesday that there wasn’t a positive case at Union, but it wasn’t clear whether the team will play without any of its players Friday night.

While the Falcon Knights were finishing up a 5-1 “regular season” with a 40-7 win over Brockway last week, the Hubbers were impressively securing the top seed in the IU9 Bubble with a 14-0 shutout of two-time defending champion Coudersport.

The Hubbers limited the Falcons to just 100 yards and held Coudersport standout Hayden Keck to 5-for-18 passing for 58 yards and minus-8 yards rushing on 14 attempts. The Hubbers did lose their starting quarterback Noah Lent to an injury and his status is uncertain for Friday. Without Lent, who still ran for 85 yards on 11 carries, Braedon Johnson took over quarterback duties and finished with 154 yards on 24 carries with both of the team’s touchdowns.

Lent and Johnson do most of the heavy lifting for the Hubbers’ run-heavy offense, rushing for 677 and 596 yards respectively with a combined 16 touchdowns. Lent has thrown just 47 passes, completing 21 for 416 yards and 10 TDs.

Caden Rainey scored three TDs in three different ways last week — receiving, punt return and interception return — and he’s been the big playmaker for the Falcon Knights. His seven TDs lead the team with two rushing, two receiving, one on one of his team-high four interceptions and two on punt returns. He’s caught 22 passes for 282 yards while rushing for 176 yards on 26 attempts.

Carter Terwint leads the team with 54 tackles with Penny (39), Bowser (34) and Culbertson (27) among the other leaders. The Falcon Knights have allowed just six TDs all season.

More intrigue and it started last week with the Bulldogs’ game at Curwensville canceled because of the team being exposed to a player on Keystone’s team in the prior week’s game. That led to a Health Department decision to quarantine 18 of the Bulldogs for a 14-day period that ends on Friday, so the Bulldogs will practice with the rest of their team with the quarantined players attending meetings via digitally.

It’s the third straight year the teams will meet in the playoffs and the fifth time overall. Last year, the Bulldogs were walloped 56-0 at Coudersport during the regular season before the Falcons beat them again in the district final, 42-13.

In 2018, the Bulldogs beat the Falcons in New Bethlehem, 41-27, during the regular season before Coudersport came back two weeks later and routed the Bulldogs in the first round of the playoffs, 52-7.

As stated in the Union/ACV vs. Smethport preview, the Falcons were limited to 100 yards by Smethport. The Bulldogs will need to focus on doing the same thing as Keck leads the Falcons in rushing (57-523, 11 TDs) and shares most of the workload with running back Brandt Kightlinger (69-511, 4 TDs). Keck has completed 14 of 41 passes for 338 yards and three TDs with Dalton Keglovits the recipient of eight receptions for 269 yards and all three TDs.

Cale Ayers (9.8), Keck (6.2), Dylan Hajzus (5.5) and Kightlinger (5.4) are the team’s top tacklers on defense. Ayers has three sacks and Keglovits leads the secondary with three interceptions.

The Elkers start their charge for a fifth straight district title and travel out of the IU9 Bubble to play the Raiders, who have run the table on their schedule so far by averaging 44 points and 437 yards per game while also featuring an opportunistic that’s forced 17 turnovers.

Defensively, MacBeth leads the secondary with four of the team’s 12 interceptions. Nathan Taylor (49), Keth (47) and Elliot Park (46) are the team’s top tacklers. Taylor will miss the game due to his commitment to wrestle in the prestigious Super 32 Challenge this weekend.

The Elkers, who have split with the Raiders since the formation of the D9 League two years ago (Raiders 28-11 in 2018 and Elkers 28-14 last year), are meeting the Raiders for the first time ever in the playoffs.

Both of Ridgway’s losses (34-7 in Week 3 and 35-21 last week) have come to St. Marys, which features the same offense as the Raiders with former Raiders offensive coordinator Frank Varischetti calling plays for the Dutch.

Ricky Delhunty (50), Cole Casilio (35) and Dom Allegretto (33) are the leading tacklers on the Elkers’ defense.

What’s the encore have for us at Clarion University’s Memorial Field? Two weeks ago, the Wildcats squeezed out a 43-41 wild win at Karns City, rallying from a 35-15 deficit in the fourth quarter, then holding the Gremlins on a two-point conversion try that would’ve tied the game with no time on the clock. The teams combined for 853 yards and 46 first downs along with 34 fourth-quarter points.

Central Clarion quarterback Cal German threw for 330 yards and four TDs while Karns City’s Eric Booher was 13-for-23 for a career-high 225 yards and two TDs.

Kaoz Baker leads the Wildcats with 10.3 tackles per game with Cooper Shall (8.2) and Boggess (8.2) next in line. Burford and Ryan Hummell have four and three interceptions respectively.

For the Gremlins, Booher has completed 35 of 72 passes for 633 yards. Kaden Scherer and Micah Rupp are his top receiving targets. Cole Coon and Jayce Anderson were the leading rushers with 200 and 179 yards respectively going into last week’s game with Moniteau.

District 10 Gets Postseason Rolling With Three Games
D9and10Sports.com to Broadcast Union/A-C Valley at Smethport Football Semifinal Game Powered by McKan Trucking
We use cookies on our website to give you the most relevant experience by remembering your preferences and repeat visits. By clicking “Accept All”, you consent to the use of ALL the cookies. However, you may visit "Cookie Settings" to provide a controlled consent.
Cookie SettingsAccept All
Manage consent