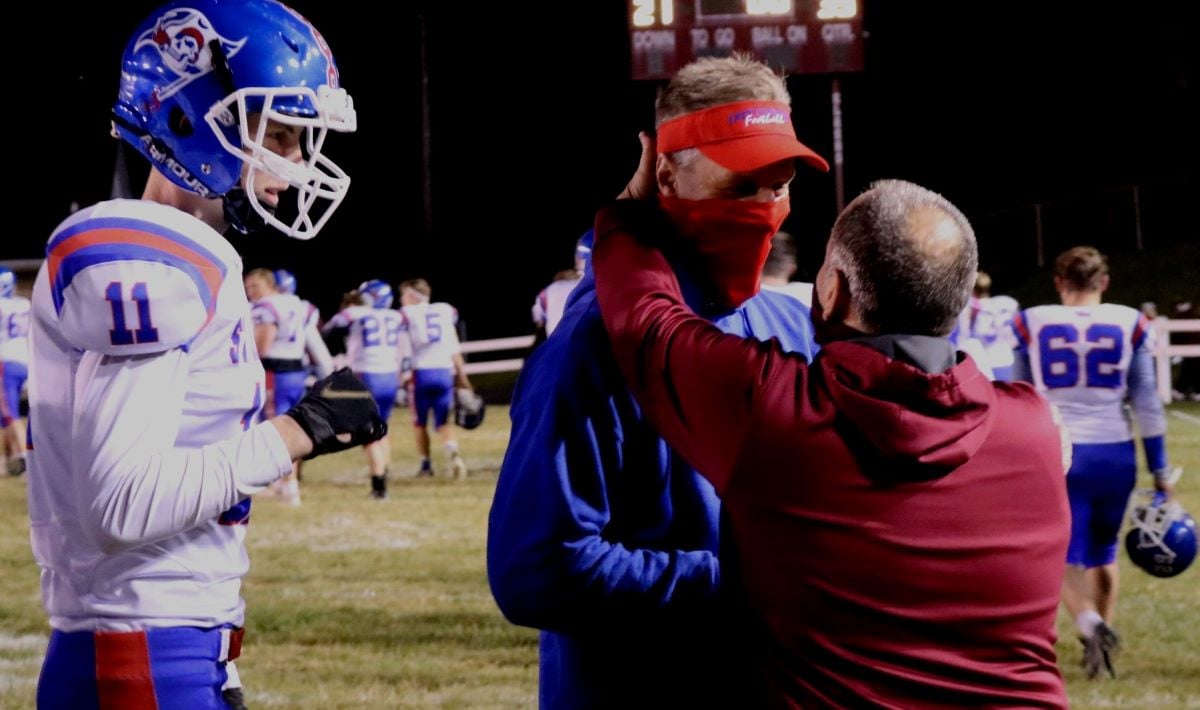 RIDGWAY, Pa. – Scoring 28 straight points after finding itself tied at seven in the second quarter, visiting St. Marys completed a perfect 5-0 regular season with a 35-21 win at Ridgway.

It is the first unbeaten – albeit abbreviated – regular season for the Dutch since 1966 went they went 9-0 and comes just two seasons after St. Marys went 0-10 the second of back-to-back winless season (it was 0-9 in 2017). The Dutch improved to 6-5 last year in Chris Dworek’s first year as head coach.

A pair of Ridgway fumbles in the second quarter helped St. Marys take complete control after Christian Coudriet’s 1-yard touchdown run had given the Dutch a 14-7 lead. That score came one play after a 41-yard pass to Logan Mosier.

Ridgway then fumbled on the ensuing possession leading to another 1-yard run by Coudriet that put St. Marys ahead 21-7 late in the half.

Things then went from bad to worse for the Elkers (3-2), who were swept in the season series by St. Marys and dropped to the fourth seed in the District 9 Class 1A playoffs, when another fumble, this one with 20 seconds left before halftime, gave the Dutch the ball at the Ridgway 23-yard line.

Coudriet then hit Michael Fitzgerald with a 23-yard scoring pass with just 11 seconds left before the half to all but put the game away at 28-7.

If that score didn’t put it away, a 2-yard run by Coudriet on the opening drive of the second half did. The score was set up by a 64-yard Jacob Kline run.

Coudriet scored three times on the ground on just five carries that gained seven yards and was also 15 of 28 passing for 213 yards but was intercepted three times.

One of those picks went for a touchdown, as Cameron Marciniak returned an interception 45 yards to tie the game at seven. Ben Briggs and Dominick Cherry also had interceptions for the Elkers.

Briggs accounted for the other two scores for Ridgway scoring on a 16-yard run and then hitting Wil Howard with a 95-yard scoring pass late in the game.

Booher, who was named the Allegheny Grille of Foxburg Jim Kelly Player of the Game, talked about the win.

Relisten to the Game

Booher was 10 of 19 passing for 181 yards and threw a 38-yard touchdown pass to Kaden Scherer early in the second quarter and also hooked up with Micah Rupp with a 48-yard scoring pass in the third quarter.

The Gremlins defense also came up with a big play late in the first half recovering a Moniteau fumble at the 6-yard line leading to a 6-yard Jayce Anderson touchdown run with 1:10 to play before halftime that gave Karns City a 14-0 halftime lead.

It was the second shutout in three games for the Karns City defense.

The Gremlins secured the third seed in the District 9 Class 2A playoffs with the victory.

ST. MARYS, Pa. – Ravis Bobby returned a fourth-quarter kickoff 71 yards for a touchdown, and that proved to be the difference in a 34-28 Elk County Catholic win over visiting Otto-Eldred.

The Crusaders (3-2) had just watched Otto-Eldred (1-3) tie the game at 28 on a 4-yard Josh Rhinehart touchdown run followed by a Cole Sebastian to Brayden Wiley 2-point conversion pass with 10:44 to play in the game.

But Bobby fielded the ensuing kickoff and took it to the house to give the lead back to ECC.

On the ensuing drive, the Terrors drove to the ECC 1-yard run, but on third-and-goal Sebastian was tackled for a 2-yard loss. Then, on fourth-and-goal, Rhinehart fumbled, and, although teammate Jacob Coffman recovered the ball at the 1-yard line, ECC got the ball back on downs with 4:08 to play.

The Crusaders were then able to run the clock out thanks in part to a run of 24 yards by Nick Crisp on the first play after the change of possession. ECC did survive a Sam Kaul fumble on the drive at ECC 40-yard line that Kaul recovered on his own.

The game was tied at 14 at halftime, and the teams traded four scores – two by each side – before the game-deciding kickoff return by Bobby.

Offense was the story of the game with the teams combining for 646 yards of total offense including 350 by Otto-Eldred and 296 by ECC. But two Terrors’ turnovers, including a fumble through the back of the end zone by Sebastian in the third quarter, proved to be too much to overcome.

Crisp ran for 125 yards and a touchdown on 16 carries, and Kaul added 68 yards on 12 carries and caught the one pass for 65 yards.

TJ VanScoter scored twice on the ground for Otto-Eldred and ran 17 times for 68 yards.

Sebastian led the Terrors with 12 carries for 86 yars and a touchdown while going 13 of 21 passing for 118 yards and an interception. Rhinehart added 15 carries for 80 yards and the score and caught one pass for 12 yards. Ethan Smith hauled down four catches for 64 yards.

DUBOIS, Pa. – Scoring 21 unanswered points in the second quarter, visiting Brookville made it a season sweep of DuBois with a 35-13 win at Mansell Stadium.

Robert Keth caught six passes for 109 yards and a touchdown while running for two short TDs. Ryan Daisley caught eight passes for 71 yards and two TDs. Krug hit Creed Knepp for his fourth TD for the Raiders’ final points in the fourth quarter.

Austin Mitchell threw a 12-yard TD pass to Dale Kot in the first quarter and scored on a 9-yard run in the fourth quarter.

Zach Henery rushed for 80 yards on 11 carries to lead the Beavers.

Rainey caught a 26-yard pass, returned a punt 69 yards and then an interception 25 yards. He also caught seven passes for 80 yards and hauled in a two-point conversion pass from quarterback Tanner Merwin.

Merwin completed 12 of 15 passes for 112 yards and also threw a 13-yard TD pass to Kylar Culbertson, who added a second TD on a 10-yard run. Gaven Bowser ran for 53 yards on five carries, all in the second half, and scored the Falcon Knights’ last TD on a 17-yard run.

The playoff-bound Falcon Knights (5-1), who will face Smethport next weekend in the Class 1A semifinals, limited Brockway to 63 yards of offense on 46 plays. The Rovers scored on their first possession when Conner Ford hit Austin Schmader for a 10-yard TD pass, but the Rovers gained only three first downs and were limited to minus-4 yards on 37 plays the rest of the game.

HYDE, Pa. – Oliver Billotte was 5-for-8 passing for 149 yards and three touchdowns to lead Clearfield to a 42-14 Mountain League win over visiting Huntingdon.

Huntingdon fell to 0-6 on the year.

Burford caught four passes for 73 yards and hauled down touchdown catches of 22, 31 and 5 yards.

German was 12 of 21 passing for 192 yards, the three touchdowns and one interception.

Cutter Boggess also scored on a pair of 1-yard run for the Wildcats (5-2), who secured the second seed in the District 9 Class 2A playoffs, and caught a game-best five passes for 96 yards while rushing five times for a yard and the two scores.

Kyle Bottaro returned a fumble 30 yards for a touchdown, and Christian Simko scored on a 6-yard run for Central Clarion County as well, as the Wildcats led 49-0 until midway through the fourth quarter.

Punxsutawney got a pair of late touchdowns with Zeke Bennett scoring on a 2-yard run with 6:50 to play and Alex Phillips catching a 9-yard pass from Kameron Falgout with just 13 seconds left.

The winless Chucks (0-6) gained just 147 yards on the night with Bennett rushing 19 times for 65 yards. Falgout, who rushed 14 times for 28 yards, was also 5 of 9 passing for 36 yards. Punxsutawney turned the ball over three times, all on fumbles.

EMPORIUM, Pa. – Noah Archer ran for 137 yards and two touchdowns on 19 carries, as Port Allegany picked up its first win of the year, 40-8, at winless Cameron County.

Archer scored on first-half runs of 1 and 4 yards to help the Gators, who led 24-8 at halftime, score the game’s first 24 points.

Trey Ayers also scored twice for Port Allegany (1-5) returning a fumble 35 yards for a touchdown in the first half and catching a 9-yard touchdown pass from Drew Evens after halftime.

Blaine Moses also added a 1-yard touchdown run in the fourth quarter for the Gators.

Evens was 10 of 18 passing for 111 yards, the one touchdown and one interception. Ayers caught five of those passes for 73 yards and the score, while Archer also had five catches for 38 yards.

Baney was 5-for-15 for 39 yards, while Rieder ran nine times for 77 yards and caught two passes for 15 yards and the touchdown.

BRADFORD, Pa. – Two weeks after beating Bradford 51-7, Kane found itself in more a dogfight against the Owls at Bradford’s Parkway Field but still came away with a 27-14 victory.

Zuke Smith threw three touchdown passes and Josh Buhl scored twice – once on the ground and once through the air – to help the Wolves improve to 2-3 on the season.

Buhl, who also scored on a 21-yard run, caught two passes for 71 yards and the touchdown and ran eight times for 42 yards, while Zampogna caught six balls for 87 yards and the score

Davis was 11 of 29 for 111 yards, the touchdown and an interception and ran 14 times for a game-high 83 yards and the touchdown. Jerid Wilmoth caught six passes for 36 yards for the Owls.

D-10 Football Recaps: Five Teams Stay Perfect; Corry Wins Double Overtime Thriller
Smethport Claims Top Spot in IU9 Small School Bubble with 14-0 Win at Coudersport
We use cookies on our website to give you the most relevant experience by remembering your preferences and repeat visits. By clicking “Accept All”, you consent to the use of ALL the cookies. However, you may visit "Cookie Settings" to provide a controlled consent.
Cookie SettingsAccept All
Manage consent