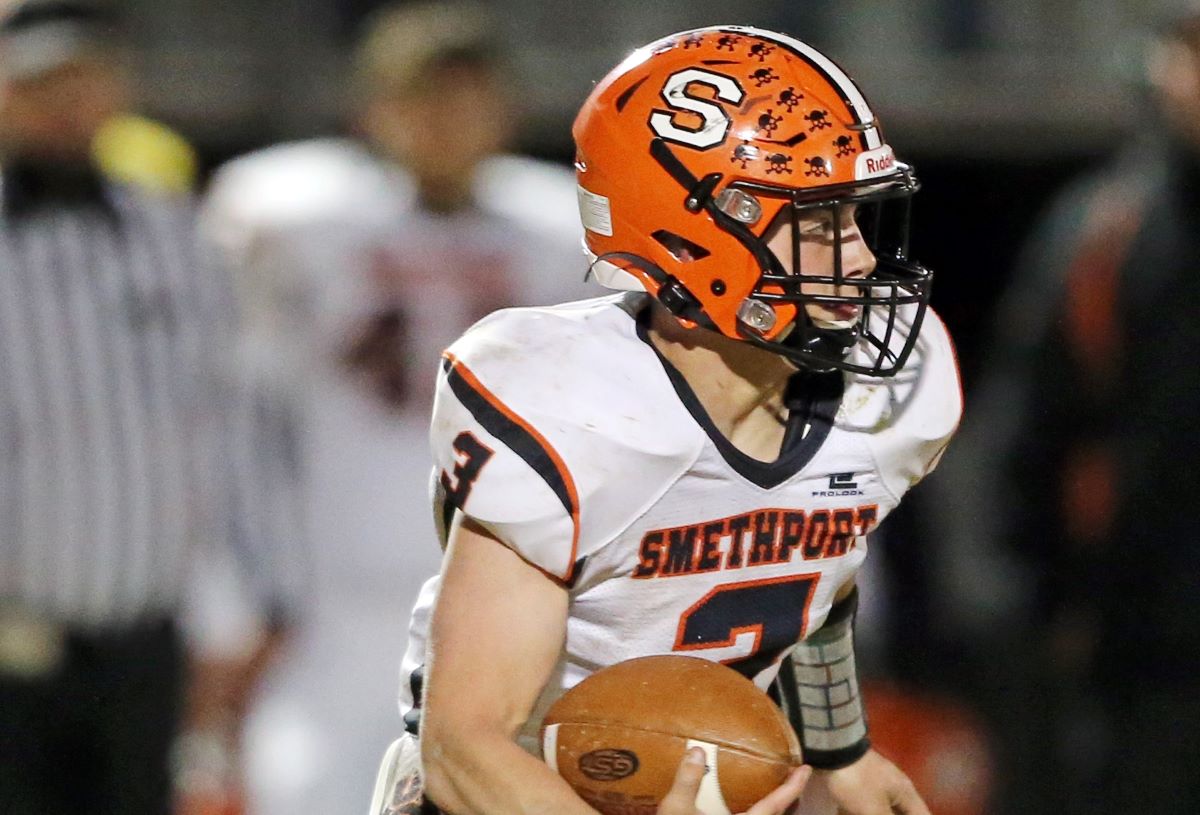 “Our offense line, those kids, those guys, picked up the torch and put it upon themselves to carry us to victory tonight after Noah got hurt,” Smethport head coach Adam Jack said. “They made the decision they were going to dominate from that point on.”

Smethport center Tyler Howes and the rest of the Hubbers offensive line played a big role in the victory Friday night. Photo by Paul Burdick. To view more of Burdick’s work click on the photo.

Noah is Smethport quarterback Noah Lent, who left the game in the third quarter with an injury and didn’t return. His status for next week’s District 9 Class 1A semifinal game is questionable at this time. Lent was 0-for-5 passing before getting hurt but did run 11 times for 83 yards.

But even without the star quarterback, Smethport was able to move the ball thanks to Braedon Johnson. The diminutive running back took over at quarterback, and the Hubbers didn’t miss a beat.

Johnson ran 24 times for 157 yards and scored on a first-half run of 40 yards and a fourth-quarter run of 14 yards. He was also 1-for-1 passing for 11 yards. His second touchdown came after Smethport had fumbled inside the Coudersport 10-yard line, but the Hubbers’ defense forced a three-and-out, and the offense responded with the score. Johnson ran 24 times for 157 yards and was 1-for-1 passing for 11 yards.

“Braedon has been a leader for us,” Jack said. “He has been on the field since his freshman year, and he rises to the occasion and makes plays for us when we need them. He took over at quarterback, and did what he had to do to get a win for us tonight.”

Smethport also scored on a safety in the first half when Coudersport quarterback Hayden Keck was called for intentional grounding in the end zone. The Falcons also had a fourth-quarter touchdown pass from Keck to Dalton Keglovits called back on a penalty.

Brandt Kightlinger paced Coudersport with 10 carries for 43 yards, but Smethport bottled up Keck allowing him just two rushing yards on 12 attempts and holding the senior to 6 of 22 passing for 19 yards.

“We just played disciplined defense from start,” Jack said. “We came in with a game plan to shut down Keck and make them beat us in other areas. Our kids were able to successfully execute that game plan.”

Smethport’s defense played a key role in the win. Photo by Paul Burdick. Click on the image for more work from Burdick.

Smethport will now most likely get a home playoff game next week against Union/A-C Valley, while Coudersport could be on the road at Redbank Valley. There is all of a sudden a lot of question marks surrounding the District 9 Class 1A playoffs after a number of Redbank Valley players were ordered into a COVID-19 quarantine that will not end until Friday, Oct. 23, because of contact with a Keystone player who was diagnosed with COVID-19 this week. The contact occurred during the Oct. 9 Redbank Valley win over Keystone.