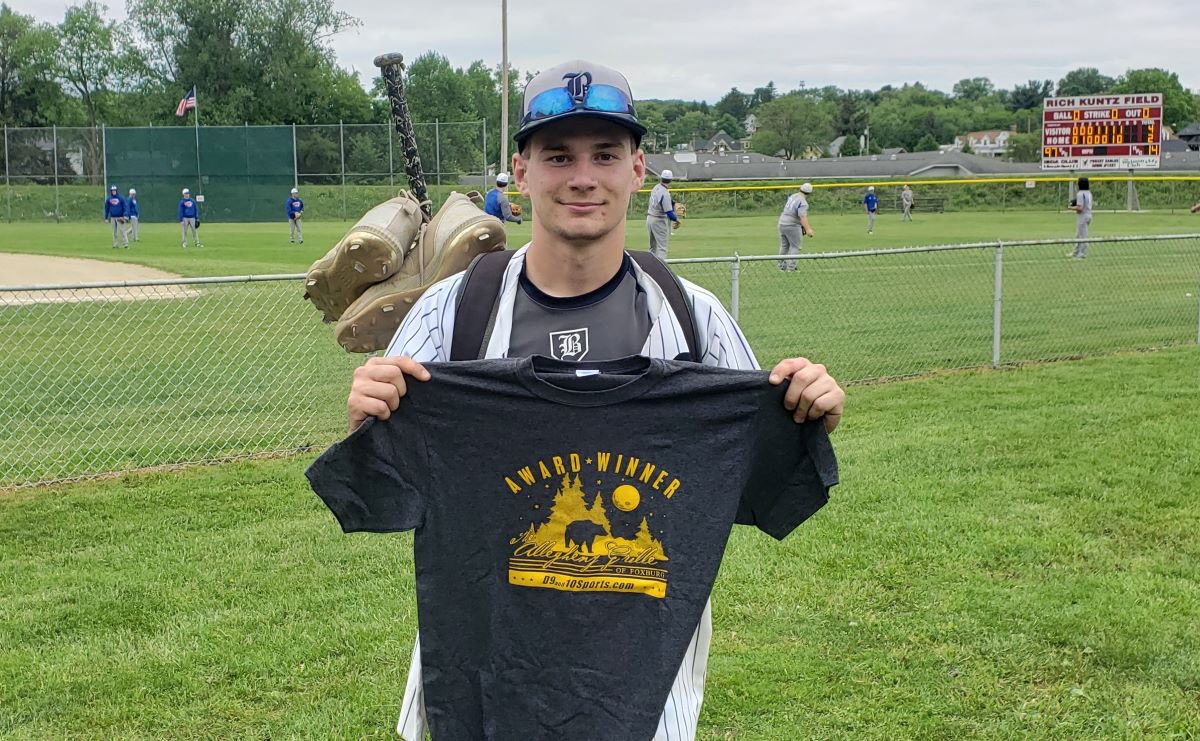 PUNXSUTAWNEY, Pa. – Jamison Rhoades’ reaction to left fielder Carson Weaver catching the final out in Brookville’s 4-2 win over Moniteau in the District 9 Class 2A quarterfinals at Kuntz Field in Punxsutawney said it all.

Rhoades pumped his fist while throwing his catcher’s mitt and helmet in celebration, as the Raiders moved into the District 9 semifinals for the first time since 2018.

“Not at all, not at all,” Rhoades said when asked if he wanted his high school career to end. “We had a team meeting yesterday, just the players. The seniors were like we aren’t done yet. We are really working on that.”

Rhoades’ game was so much more than just a celebration though, as the senior backstop played an instrumental role both offensively and defensively in the victory while being named the Allegheny Grille of Foxburg Player of the Game.

The RBI base hit came in the fifth inning with two outs and the game tied at one.

Swinging at the first pitch from Moniteau ace Branson Carson, Rhoades poked a single over the head of second baseman Derrick Creedon-Moyer to score Riley Smith from third and give Brookville a lead it never relinquished.

“Coming into the game, all week in practice those three days we had or whatever, we set up a pitching machine from about 35 feet away and turned it up to 60 (MPH),” Rhoades said. “We were really working on not having a full swing. Branson is a really great pitcher. Our approach was just to get that bat out there and the velocity (of the pitch) will do the rest.”

Rhoades’ run came at a crucial point in the game, as well, with the Raiders holding a 3-2 lead in the seventh. He led off the inning with a double down the left-field line.

Griffin Ruhlman, who had to come out of the game in the bottom of the sixth after taking a pop fly off his face in right field, then re-entered the contest by singling on a wicked hop over the head of the shortstop (call it a Brookville Hop) driving home Rhoades to make it 4-2.

Rhoades wasn’t only a star on offense.

He also was part of two massive plays in the bottom of the sixth inning that kept Brookville in the lead.

After Jacob Obman started the inning by reaching on an error that went off the face of Ruhlman in shallow right field – the ball really probably should have been handled by second baseman Hunter Roney – Carson followed with a double into the left-center gap.

It looked like Obman was going to score easily on the play, but he tripped over third base rounding the bag. Brookville, however, looked the gift horse in the mouth when Smith, the shortstop, threw the ball out of play trying to get Obman going back to third allowing Obman to score and Carson to go to third with no one out cutting the Brookville lead to 3-2.

It was during the next at-bat that Rhoades made perhaps the defensive play of the game.

With an 0-2 count on Connor Ealy, Geer bounced a curveball way out in the left-handed batter’s box that Rhoades was able to get to it to save the wild pitch and hold Carson at third.

“I believe the count was 0-2, 1-2, we were ahead,” Rhoades said. “I knew Hunter has the curveball, and he is comfortable with it. I was thinking I am going to call it here. I was hesitating. I don’t usually hesitate, but that one I was really nervous about. I could read it out of his hand. It was going to my right. At that point, I wasn’t really thinking. I threw my body at it and got it with my glove. It was kind of an ole. But sometimes that is what it takes.”

After Geer struck out Ealy, Moniteau tried a suicide squeeze off the bat of Carson Ritts with Carson thrown out at the plate by Geer on a toss to Rhoades, who blocked the plate. The play may have been intended as a suicide squeeze, but Carson waited for the ball to be bunted before breaking for the plate making it a safety squeeze.

“If you were to watch any of our games this whole year our bunt defense has been the worst part of our defense,” Rhoades said. “The last couple of days we had time to prepare. We really worked hard on the bunt defense. Just yesterday we worked on that same exact squeeze play and it happened today in a big time in the game. I was happy we were prepared for that one. Big shout out to coach for that one.”

Brock Matthews was 1-for-4 with the lone RBI for Moniteau.

Geer got the win going seven innings allowing two runs, one earned, on six hits, and a walk while striking out six.

Brookville will take on top-seeded Johnsonburg in the semifinals at 3 p.m. Thursday at Stern Field in DuBois.

PUNXSUTAWNEY, Pa. – Brandon Grossman’s 1-out single to the left-center gap with one out in the seventh gave Karns City a 4-3 walk-off win over Kane in the District 9 Class 2A quarterfinals at Punxsutawney’s Kuntz Field.

The inning started with a one-out walk to Cole Sherwin, and then a Kane error opened the door.

Mallick Metcalfe hit what could have been a routine double-play ball to second baseman Harley Morris. But Morris had trouble fielding the ball and then bobbled it a second time with Metcalfe just beating the rap at second.

Michael Neff then walked to load the bases for Grossman, who drove the third pitch from new pitcher Andrew Jekieklek into the gap for the game-winner.

Kane, which trailed 3-1 going to the sixth, tied the game with a pair of runs in the sixth on a Karns City error on a ball hit by Dane Anderson.

Sherwin got the win in relief of Metcalfe going one inning allowing a hit and a walk. Metcalfe started going six innings allowing three runs, two earned, on nine hits, and a walk while striking out six.

Karns City will take on sixth-seeded Redbank Valley in the semifinals at 4:30 p.m. Thursday at Punxsutawney.

Bain went 6 ⅓ innings on 99 pitches allowing an unearned run on four hits and five walks while striking out seven. Ty Carrier got the final two outs for the Bulldogs.

Jake Mullins took the loss. He was hurt by six errors behind him and gave up only one earned run out of the five he allowed. He was tagged for seven hits, a walk, and a hit batter while striking out five in five innings.

Shane Sunderlin went two innings in relief allowing an unearned run on a hit batter while striking out three.

Redbank Valley will face second-seeded Karns City in the semifinals at 4:30 p.m. Thursday at Punxsutawney.

JOHNSONBURG, Pa. – Aiden Zimmerman went 2-for-4 with a home run, a double, a run scored, and four RBIs to help top-seeded Johnsonburg cruise past eighth-seeded Port Allegany, 11-1, in five innings at Knothole Field in Johnsonburg.

Sawyer Prince went 1-for-2 with a run scored for Port Allegany.

Neither of Johnsonburg’s two pitchers was taxed.

D9 1A BB: Pair of late Runs Lifts C-L Past ACV/Union; Eight-run Fifth Helps ECC Beat Smethport Powered by North Washington Rodeo
May 25, 2022 D9/10 Baseball/Softball Schedule Powered by the BHL Sportsperson of the Year Award
This website or its third-party tools process personal data.In case of sale of your personal information, you may opt out by using the link Do not sell my personal information.
×
Manage consent