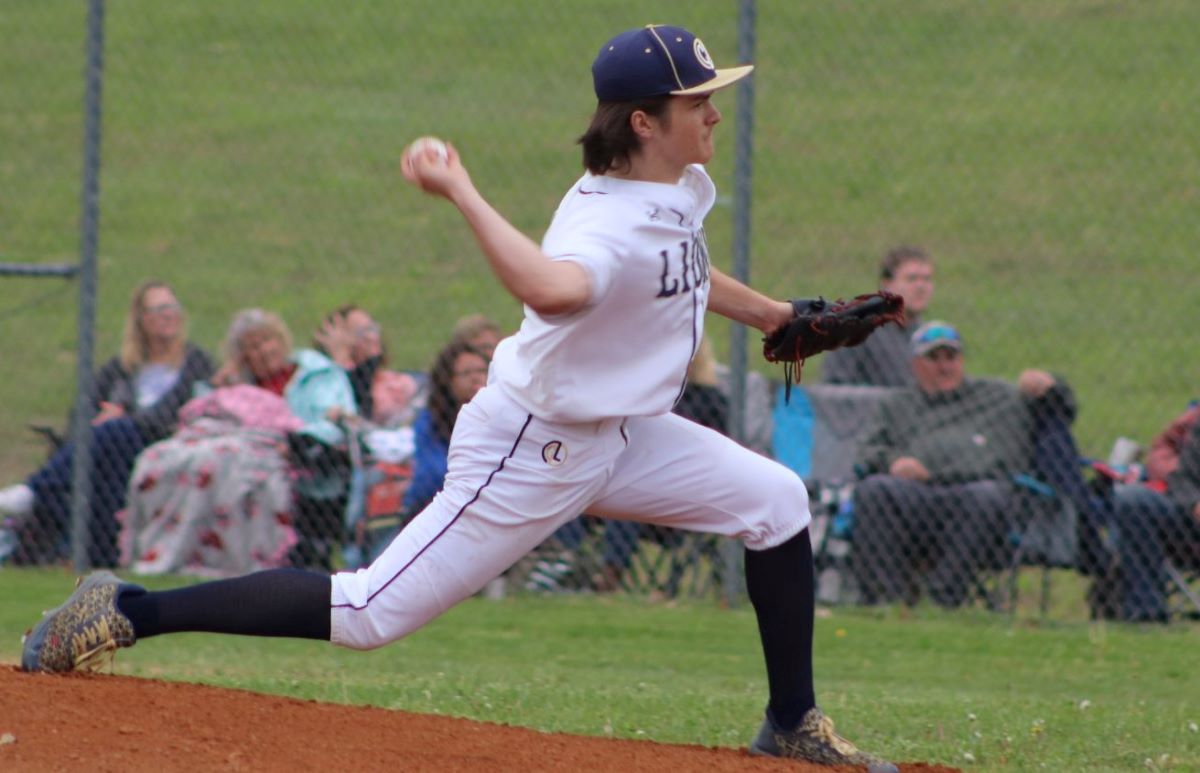 Bryson Huwar throws a pitch during the first inning of C-L's 5-3 win over A-C Valley/Union Tuesday. Huwar was the Allegheny Grille of Foxburg Player of the Game. Photo by Diane Lutz

STRATTANVILLE, Pa. – Nick Aaron’s two-out single in the bottom of the fifth inning scored Jase Ferguson from second to break a 3-all tie, and third-seeded Clarion-Limestone knocked off sixth-seeded A-C Valley/Union, 5-3, at C-L.

Ferguson got the rally started with two outs with an infield single that just went under the glove of third baseman Trey Fleming. Ferguson then stole second before scoring on the Aaron base hit.

The Lions added an insurance run in the sixth when Corbin Coulson singled, stole second, went to third on a throwing error, and scored on a Kohen Kemmer ground out when he broke late for the plate after Fleming threw the ball to first.

C-L led 3-0 after three before A-C Valley tied the game with a run in the fourth and two more in the fifth with the fifth-inning runs coming on a two-run, two-out double by Fleming to centerfield just out of the reach of a diving Coulson, the centerfielder.

Those two runs came off reliever Tommy Smith, who allowed a two-out single to Ryan Cooper followed by a walk to Lane Bauer.

Smith came on in the fifth to relieve Bryson Huwar, who was taken out of the game despite throwing a gem at the time having given up one unearned run on two hits and a walk while striking out four. But C-L wanted to save Huwar for Thursday’s semifinal game vs. Clarion, and he had reached his 50-pitch limit (technically 52 but because the final two after 50 were thrown to the same batter as pitch 50 it reverts back to 50 pitches) where he would only need one-day rest.

Huwar’s mound outing coupled with a 2-for-3 performance at the plate with a run scored and two RBIs earned him Allegheny Grille of Foxburg Player of the Game honors.

“My sidearm two-seam was working pretty well,” Huwar said. “It was running in on guys. My slider and curveball, I was just feeling it today. It was a good thing Tommy (Smith) and Logan (Lutz) came in to pitch. Now, we are all good to pitch Thursday.”

While Huwar’s arm was a big reason for the win, so was his bat.

He got the Lions ahead 1-0 in the first when he singled home Lutz, who had opened the inning with a double, and then in the third he made it 2-0 on another single that scored Tommy Smith, who had walked to start the inning and stole second. Huwar came round to score one batter later on an RBI single by Jordan Hesdon to push the C-L lead to 3-0.

“We knew we were facing Ryan Cooper, and he is a great pitcher,” Huwar said. “Last time, we really struggled against him. I didn’t have my best game. I didn’t really swing the bat (well). So, I was like I am coming up and I am putting this time on top. I am going to give us some momentum.”

Gary Amsler singled leading off the fourth and stole second. Max Lowrey then hit a ball right back at Huwar, who looked Amsler back to second before throwing to first. But his throw was wild allowing Amsler to score and Lowrey to go to second.

But Huwar settled in and struck out Bailey Crissman before getting some serious help from his defense.

With Lowrey at third, Sebastian Link hit a fly ball to right that Hesdon caught. Lowrey tried to score, but Hesdon threw him out at the plate to end the inning.

While C-L had eight hits in the game, Huwar was the only one with multiple hit, and Lutz’s leadoff double was the lone extra-base hit for the Lions.

Cooper was 2-for-3 with a walk and a run scored for the Falcon Knights, while Fleming was 1-for-4 with the double and two RBIs.

Cooper took the loss giving up five runs, four earned, on six hits and three walks while striking out four in six innings of work.

C-L will take on rival and second-seeded Clarion at Noon Thursday at Showers Field in DuBois. It is a noon start because of graduation at both schools, and the game is in DuBois because of the possibility of rain. The field at Showers is completely turf allowing for a better chance to continue the contest in case of bad weather.

ST. MARYS, Pa. – Trailing 2-1 going to the bottom of the fifth, fourth-seeded Elk County Catholic erupted for eight runs and then added three more in the sixth to 10-run rule fifth-seeded Smethport, 12-2, in six innings at Berwind Field in St. Marys.

A pair of fielder’s choices that didn’t result in an out and key error opened the flood gates for the Crusaders before Joe Tettis launched a three-run home run for the big hit of the inning.

Luke Ginther started the rally with a lead-off triple off Smethport starter and loser Alex Ognen.

That’s when things started to go south for the Hubbers.

Lance O’Neil hit a grounder to shortstop Noah Lent who tried to get Ginther at the plate, but Ginther beat the rap tying the game at two.

After Tommy Slay hit into a fielder’s choice with O’Neil out at second, an error on Lent allowed David Anderson to reach with Slay going to second.

Ognen then walked Ben Reynolds to load the bases before David Zambanini hit a grounder to second with an out being recorded at second. But Zambanini was safe at first giving ECC a 3-2 lead.

That’s when Tettis stepped to the plate and hit a 1-1 pitch over the centerfield fence to open the game up.

Things really fell apart for Smethport from there with a walk, a hit batter, a single, an error, another walk, and another error pushing the ECC lead to 9-2.

Then in the sixth, Ginther was hit by a pitch with the bases loaded to make it 10-2, and O’Neil ended the game with a two-run single.

Brandon Higley was 2-for-3 with a double and an RBI for Smethport.

Slay got the win going six innings allowing two runs, one earned, on four hits, two walks, and a hit batter while striking out nine.

Ognen took the loss going 4 ⅔ innings allowing nine runs, two earned, on four hits, four walks, and two hit batters while striking out six. John Adamoski gave up one earned run on a walk and a hit in ⅔ of an inning, and Lent was charged with two earned runs on two hits, a walk, and a hit batter in a ⅓ of an inning.

ECC will take on top-seeded DuBois Central Catholic at 4:30 p.m. Thursday at Brockway.

D10 4A Baseball: Thompson Fires No-Hitter for Slippery Rock; Prep, Meadville, Harbor Creek Move On Powered by North Washington Rodeo
D9 2A BB: Rhoades Leads Brookville into Semifinals; KC Walks Off Kane; Redbank, Jburg Win Powered by North Washington Rodeo
This website or its third-party tools process personal data.In case of sale of your personal information, you may opt out by using the link Do not sell my personal information.
×
Manage consent