Clarion One Match from State Championship after Breezing Past No. 2 Bishop Canevin 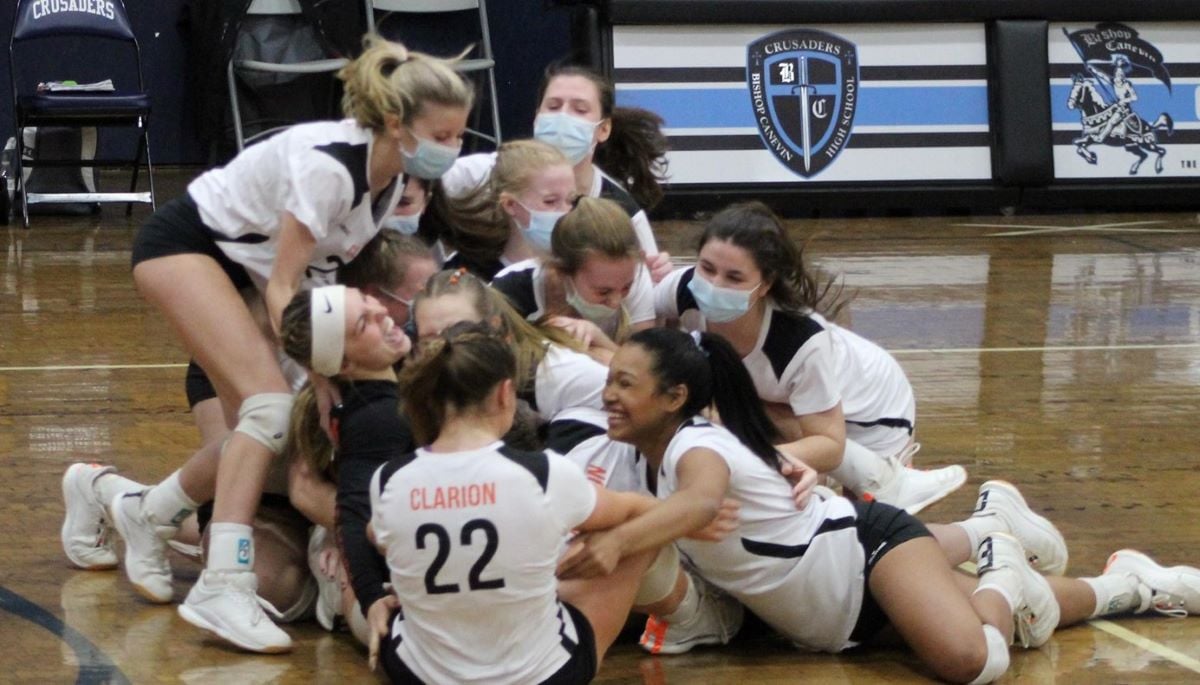 PITTSBURGH – The goal is now one match away.

Since immediately following a loss in the PIAA Class 1A semifinals to Northern Cambria Nov. 12, 2019, the Clarion volleyball team has been focused on one thing – getting to the PIAA championship match and taking home PIAA gold for the first time since 2012.

The Lady Cats (23-0) are now one match away from achieving their goal after ousting WPIAL champion Bishop Canevin (17-2) in three sets, on the road Tuesday night.

And for the second match in a row against a team ranked No. 2 in the state in Class 1A, it really wasn’t close.

“These kids have worked so hard for so long,” Clarion head coach Shari Campbell said. “They’ve done it (this year) while no one’s watching, while some people are watching, while everybody is watching, at least (watching via) streaming. It’s a testament to their dedication to doing this, to doing something that they love, for the group that they love. They’ve become a real family, and we’re super focused. I’m so proud of this group. This is top to bottom an incredible roster of kids. There is such a work ethic. There is such character. They come into the gym and they are for each other every day, and this is the result.”

Being on the road over an hour-and-half away, in a foreign gym against a team that was playing for their late head coach who passed away from cancer just prior to the WPIAL title game, could have been too much for most teams to overcome.

But not this Clarion squad.

The Lady Cats made their mark from the start racing out to a 16-6 lead in the first set and closing out the set with ease behind eight kills from Korrin Burns and three each from Payton Simko and Erica Selfridge.

“We walk into a gym, and we try to attack a team,” senior setter Brenna Campbell, Shari Campbell’s oldest daughter, said. “We don’t want to take any opponent lightly. We came in here and wanted to win.”

Brenna Campbell played a huge role in the victory with 32 set assists, eight digs, and three kills – including kills to close out by the first and second sets.

“It’s huge,” Shari Campbell said when asked about getting other systems out of system. “And it’s all about setting.”

That setting is probably most evident in times when it looks like Clarion is in a free-ball situation – in other words, a time when most teams have either messed up the pass or the set and have to just get the ball over the net in order to keep the other team from scoring.

But time and again instead of ending up with a free ball, Clarion attacks led by Burns, the super junior outside hitter, who had 16 kills while hitting .324 in the match.

“You just have a setter who can put up the ball or a Libero (Jordan Best) who can backup set,” Shari Campbell said. “And then you have other kids who can put up a hittable ball. Then you are gold. You solve problems up high instead of down low.”

It helps that Clarion has so many weapons as well.

Erica Selfridge tied Burns for the team-lead in kills with 16 and outhit Burns by hitting .464 and also had a team-high 13 digs. Then middle hitter Payton Simko and right-side/outside hitter Aryana Girvan combined for seven more kills, including four from Simko, helping to keep the Bishop Canevin defense guessing the entire night.

“It’s so much fun,” Brenna Campbell said of having so many different options to set the ball to. “They are great as hitters. They are so versatile. They can hit so many different things. They just do whatever I tell them, and they just execute it really well. It’s really fun.”

After the easy first set victory – Clarion never trailed, was never tied and never led by fewer than eight points after taking a 14-6 lead – the Lady Cats found themselves in a battle early in the second set with Bishop Canevin scoring the first three points and still holding a 7-5 lead after a block by Oliva Thomas and Gillian Golupski.

But Selfridge got the serve back for Clarion with one of her nine kills in the second set, and Girvan took over from there serving for the next five points, which included three more kills by Selfridge and an ace by Girvan. That 6-0 spurt put Clarion ahead 11-7, the the Lady Cats never led by fewer than three the rest of the way.

Girvan had a solid all-around performance adding 10 digs to her three kills and an ace.

“She is super quick,” Shari Campbell said. “She is quite an athlete. You might not have seen everything all the time (this year) because we haven’t needed her, and her back was kind of tweaked in the middle of the season. We kind of made sure she had some rest. But she is super quick, and you will see her defend really well.”

After taking the second set, Clarion wasted little time asserting itself in the third set going ahead 5-0.

And while Bishop Canevin technically came back and tied the set at six – a scoring error is the only reason it was tied as Clarion actually had earned a 7-5 advantage that was recorded as 6-6, the set and the match was never really in doubt.

A service error broke the 6-all deadlock and started a 9-1 run for Clarion that included two kills from Selfridge and a kill from Girvan.

By the time Bishop Canevin scored again on a carry by the Lady Cats, the outcome was all but decided.

“I have wanted to do this my whole life,” Brenna Campbell said of reaching the title game. “Doing this, with this team, especially in this sort of circumstance, is very special to me. I’m just so happy because this has been a 17-year dream for me.”

“We just treat practice the way we have treated them before,” Brenna Campbell said when asked how her team will remain focused so close to its ultimate goal. “Nothing has changed. It’s just another game. It’s the final step in our journey.”

Heartbreaker: Brockway Falls 2-1 to Greensburg Central Catholic in PIAA Class 1A Boys Soccer Semifinal
PIAA Reaffirms Mask Order At Board Meeting
This website or its third-party tools process personal data.In case of sale of your personal information, you may opt out by using the link Do not sell my personal information.
×
Manage consent