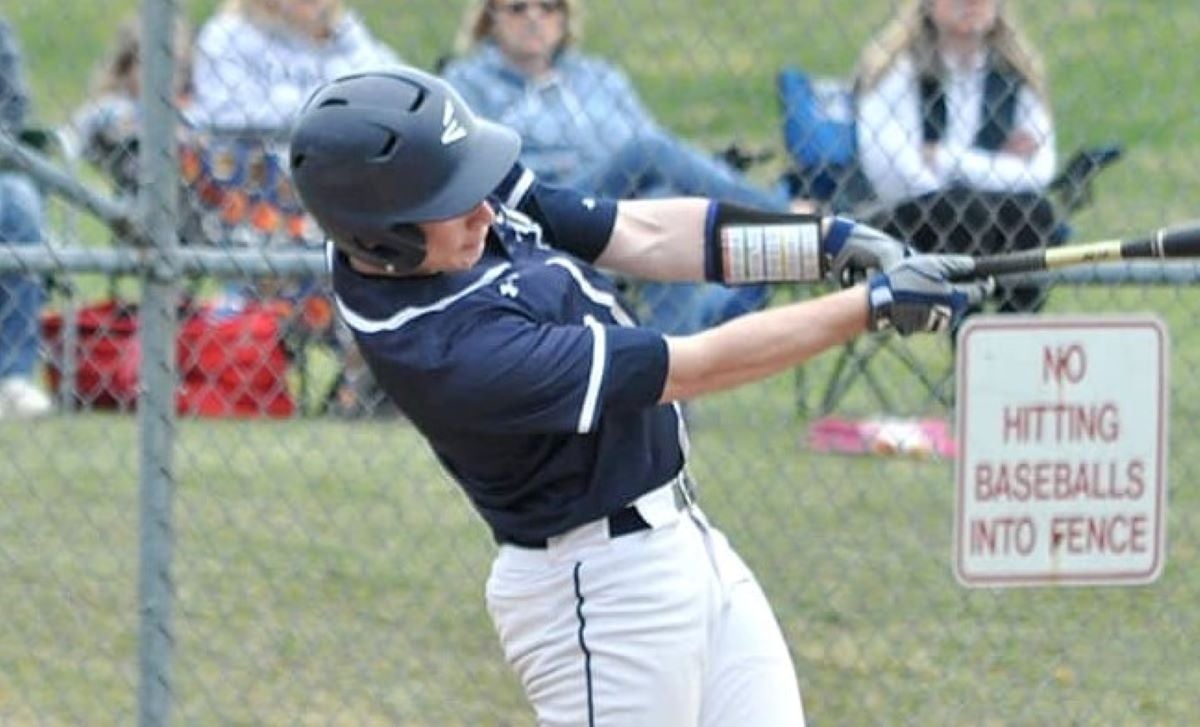 BROOKVILLE, Pa. – Hunter Roney scored on an error by Punxsutawney centerfielder Zeke Bennett to cap a four-run Brookville rally in the seventh inning, as the Raiders walked off the Chucks, 10-9.

Brookville trailed 9-6 going to the seventh but the first four batters in the inning – Jace Miner, Chase Palmer, Hunter Geer, and Roney all singled to get the Raiders back within a run, 9-8.

After an intentional walk loaded the bases, Jamison Rhoades struck out bringing up Carson Weaver.

Weaver hit the first pitch her saw from Peyton Hetrick into center scoring Geer to tie the game. Roney was going to stop at third but ended up scoring the game-winning run when the ball got past Bennett.

Brookville led 3-2 after three before Punxsutawney scored twice in the fourth and three times in the sixth to take a 7-3 lead.

The Raiders answered with three of their own in the bottom of the sixth to get back within one, 7-6, before Punxsutawney added a pair of insurance runs in the top of the seventh.

In addition to scoring the winning run, Roney was 3-for-4 with two RBIs and another run scored.

Rhoades, Brookville’s fourth pitcher, got the win despite giving up five runs on six hits and two walks in two innings of work.

Miner started and went three innings giving up two runs, one earned, on a hit, and three walks striking out six.

Bay Harper went a ⅓ of an inning allowing two runs on a walk, while Palmer went 1 ⅔ scoreless innings allowing a hit while striking out one.

Hetrick, Punxsutawney’s third pitcher took the loss getting one out in relief allowing four runs, three earned, on five hits and a walk – it was intentional – while striking out one.

Tyler Lee got the final two outs striking out one.

Sunderlin helped his own cause going 1-for-2 with a double and three RBIs on a base-loaded, bases-clearing double in the fifth that expanded a 2-0 lead into a 5-0 advantage. All five runs for the Golden Tide came in the fifth.

Jordan DePrator was 2-for-3 with a double for ECC.

DePrator took the loss in relief of Mark Kraus going two innings and giving up five unearned runs on two hits and four walks while striking out one.

He helped himself at the plate going 3-for-4 with a triple, a run scored, and two RBIs.

Also for the Warriors, Brady Thompson was 2-for-2 with a double and two RBIs, and Dawson Wallace was 1-for-3 with a walk, two runs scored, and two RBIs.

Carson Ritts pitched the final two innings for Moniteau walking one and striking out three.

JOHNSONBURG, Pa. – Ethan Wells hit a home run and tripled while going 2-for-3 with two runs scored and two RBIs in Johnsonburg’s 10-4 win over visiting Brockway.

Kaden Dennis also drove in a pair of runs for the Rams going 1-for-2 with a walk and a run scored, while Aiden Zimmerman was 2-for-4 with a double and two runs scored.

Ben Glasl had a pair of RBIs for Brockway going 1-for-4, while Seth Stewart was 2-for-3 with a run scored.

Johnsonburg used four pitchers. Camron Marciniak got the win going two scoreless innings allowing one hit and one walk while striking out three.

Marcus Copelli took the loss going two innings allowing five runs, one earned, on five hits and a walk while striking out one.

Troutman was 1-for-3 with a triple and two runs scored, while Sherwin was on base four times going 1-for-1 with two walks while also being hit by a pitch.

Tye Elder was 1-for-2 with a run scored for Keystone.

FAIRMOUNT CITY, Pa. – Cam Wagner and Ty Carrier combined on a three-hit shutout, and Wagner hit a home run to lead Redbank Valley to a 10-0, five-inning win over visiting Union.

Wagner pitched the first four innings giving up three hits and a walk while striking out seven with Carrier throwing a scoreless fifth striking out two.

Wagner also hit a three-run home run to cap a six-run first inning for the Bulldogs.

Jimmy Gundlach also drove in a pair of runs for Redbank Valley going 2-for-3 with a run scored, while Hudson Martz was 2-for-3 with a triple and two runs scored.

Christian Rodgers had a pair of hits for Union.

Bailey Crissman suffered the loss. He didn’t record an out allowing six runs on four hits and two walks. Brock Jordan threw 4 ⅔ innings of relief giving up four runs on eight hits and three walks while striking out six.

DUBOIS, Pa. – Scoring seven runs in its last two at-bats, Elizabeth-Forward out of the WPIAL beat St. Marys, 9-2, at Stern Field in DuBois.

The Warriors were the designated home team and led 2-0 going to the fifth before scoring four times in the fifth and three in the sixth to break the game open.

Logan Cherepko had three doubles for E-F while going 3-for-3 with three RBIs.

Isaiah Hart was also 3-for-3 with a double, an RBI, and three runs scored for the Warriors, while Luke Alvarez was 1-for-3 with two RBIs, and Kayden Faychak 2-for-4 with two runs scored.

PORT ALLEGANY, Pa. – Jake Merry tossed five strong innings on the mound and also drove in a run, helping Otto-Eldred to a 5-2 win over Port Allegany.

With the game tied 2-2 in the fifth, the Terrors put up a 3-spot to take the lead. The runs came via an error, a groundout off the bat of TJ VanScoter and a run-scoring single from Brendan Magee.

On the hill, Merry allowed two runs on five hits and one walk, striking out six in the process.

Jacob Coffman also drove in a run for Otto-Eldred on an RBI double in the third inning. Cole Sebastian came on in relief, tossing a pair of shutout innings, striking out four.

Trey Ayers’ 2-run single in the third accounted for both of Port Allegany’s runs.

SMETHPORT, Pa. – Trailing 5-0 going into the sixth inning, Galeton erupted for five runs to earn a 5-3 win over Smethport.

Chris Gibble’s 2-run single tied the game at 3 apiece, and Levi Evans delivered the go-ahead hit one batter later to make it 4-3. The Tigers also took advantage of a pair of Smethport errors in the inning to account for their other two runs.

Trey Kalacinski was credited with the win. The Tiger hurler went five innings, allowing three runs (one earned), while allowing three hits and striking out seven.

Gavin Sykora went two spotless innings for the save, striking out a pair.

Smethport got on the board in the first inning courtesy of Brandon Higley’s sacrifice fly. They made it 2-0 in the third on a ball Higley hit that resulted in an error.

Kameron Rounsvile suffered the loss for the Hubbers, giving up five runs in 2 ⅓ innings of work. Noah Lent, Alex Ognen, and Higley combined on 4 ⅔ innings of shutout baseball.

Ognen also finished with a pair of hits for Smethport.

The Mountaineers’ big inning came in the third when they plated six runs. Jeremy Whitehead, Dave Meersand, Gavin Emigh, and Parker White all had RBIs in the inning for P-O.

Clearfield scored its lone run of the game in the second inning on a Cole Bloom RBI double.