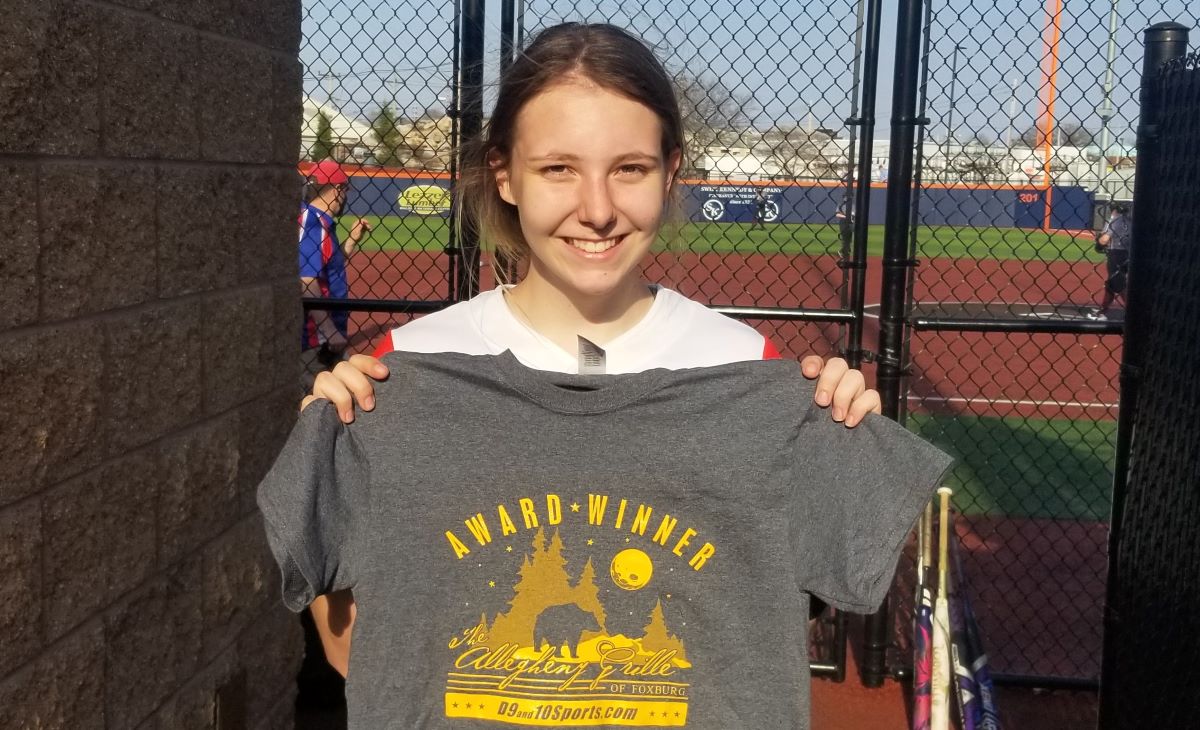 Morgan Tyler of DCC was named the Allegheny Grille of Foxburg Player of the Game after getting the win vs. Cranberry in relief and also having a rally starting triple

DUBOIS, Pa. – A four-run fourth inning by DuBois Central Catholic helped the Lady Cardinals overcome an early deficit on their way to a 6-5 win over visiting Cranberry at Heindl Memorial Field in DuBois.

Cranberry led 5-2 going to the bottom of the fourth before DCC rallied.

Shyanne Lundy’s bloop single to second base scored Emma Suplizio from second base with the eventual winning run with two outs in the fourth.

Morgan Tyler, who got the win in relief of Madi Hoyt, got the rally started with a one-out triple in front of a diving left fielder, Rylee Coe.

Risser then tied the game when she scooted home on a wild pitch.

Cranberry took a 2-0 lead in the first on a two-run home run by Maria Anderson.

DCC got a run back in the bottom of the inning, but Cranberry exploded for three more runs in the top of the second knocking Hoyt from the circle while going up 5-1.

The Lady Cardinals then got one back in the bottom of the second, and Tyler made sure Cranberry didn’t do any more damage.

After allowing the first two batters against her get hits and three of the first four, Tyler, who was named the Allegheny Grille of Foxburg Player of the Game, found a grove and retired 14 of the final 15 hitters she faced, including the 10, which started when she got Olivia Plummer to ground into a double play to first baseman Lundy to end the fourth inning.

Tyler’s final line was 5 ⅔ innings of work allowing one earned run, on four hits while striking out five.

Lundy led the DCC offense going 3-for-3 with a double and two RBIs, while Risser was 2-for-4 with a double, a stolen base, a run scored and an RBI. Suplizio reached base three times going 1-for-2 with a walk. She was also hit by a pitch and scored twice

Plummer took the loss going six innings allowing six runs, five earned, on nine hits and a walk while striking out one.

BROCKWAY, Pa. – Payton Delhunty and Julie Peterson each drove in a pair of runs to pace a 13-0 Johnsonburg road win over Brockway in five innings.

Also for the Ramettes, Jenna Pavlock went 2-for-4 with three runs scored.

Peterson tossed a two-hitter to get the shutout. She struck out 12.

Morgan Lindemuth took the loss giving up 12 runs, 10 earned, on eight hits while striking out four.

WEST SUNBURY, Pa. – Moniteau pushed across a pair of runs in the bottom of the sixth inning to defeat visiting A-C Valley, 8-7.

XX Staab tied the game with a double in the sixth and then scored the eventual winning run on an A-C Valley error.

XX Covert hit a two-run home run for the Lady Warriors and scored twice, while Abby Rottman was 1-for-2 with a double, a run scored, and an RBI. Courtney Stewart added a hit in three at-bats, scored a run, and drove home a run.

Kenzie Parks had a big day for A-C Valley going 4-for-4 with a home run, two doubles, three RBIs, and two runs scored, and Brogan Armagost also went deep and drove in three runs while going 1-for-4 with a run scored.

Brooke Skarbeck and Allie Meko each added a pair of RBIs in the win for the Lady Chucks with Skarbeck going 1-for-3 with a triple and two runs scored and Meko 1-for-3 with a walk and a run scored.

Riley Presloid also scored twice and had an RBI for Punxsutawney.

Kendal Johnston got the win going seven innings allowing an unearned run on two hits and two walks while striking out 11.

TYRONE, Pa. – Emma Hipps struck out 19 to help Clearfield to a 7-1 road win over Tyrone.

Hipps gave up one run on a home run to Maci Brodzina, who had two of the Eagles four hits off of Hipps after also doubling. Hipps didn’t walk a batter.

ST. MARYS, Pa. – Emily Mourer went 3-for-4 with a home run, a double, a run scored, and two RBIs to lead Elk County Catholic to a 12-8 win over visiting Curwensville.

Lucy Klawuhn added a pair of doubles for the Lady Crusaders going 3-for-5 with two RBIs and four runs scored with Lydia Anderson going 2-for-4 with a double, a run scored and three RBIs, and Gabby Weisner went 2-for-3 with a walk, an RBI, and two runs scored.

McMillen was 3-for-3 with three doubles, a run scored, and four RBIs.

Bree Garzel was 2-for-3 for Port Allegany.

NEW BETHLEHEM, Pa. – Gabby Dinger went 3-for-4 with a double, two runs scored, and an RBI to help Redbank Valley to an 11-0, five-inning win over visiting Union.

Also for the Lady Bulldogs, Elaina Miller was 2-for-4 with an RBI, and Trista Bowser went 2-for-3 with two RBIs, and two runs scored.