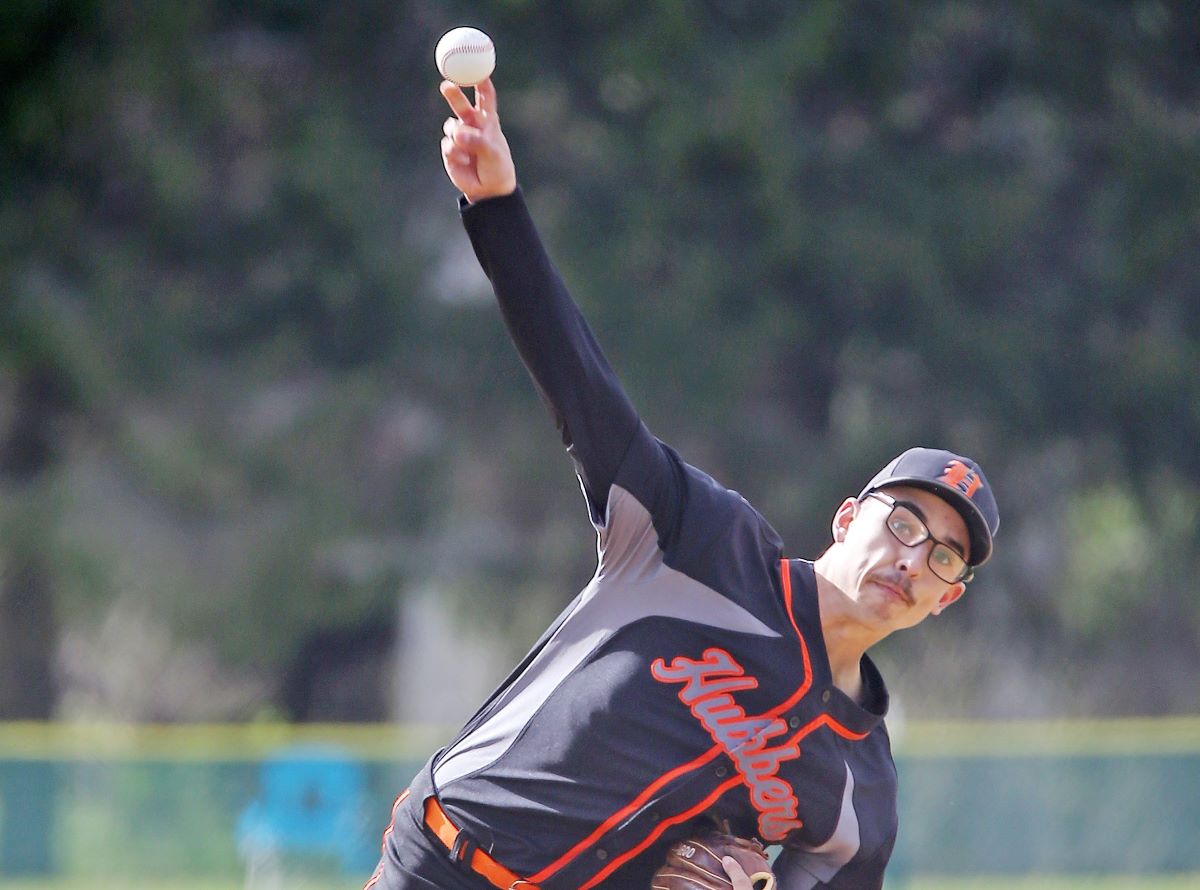 Brandon Higley of Smethport delivers a pitch during the Hubbers 11-7 win over Coudersport Friday. Photo by Paul Burdick. Check out more of Burdick's work here

PUNXSUTAWNEY, Pa. – Kameron Falgout’s walk-off, two-run double with no outs capped a seven-run Punxsutawney rally in the seventh inning in a 17-16 win over visiting Ligonier Valley.

The Rams looked in good shape after they scored five runs in the top of the seventh to take a 16-10 lead.

But Punxsutawney immediately got a rally started in the bottom of the inning when Josh Tyger singled, Carter Savage doubled, Dakota Long singled in a run, and Zeke Bennett doubled home another to make it 16-12 while putting runners on second and third.

An error on Ligonier Valley third baseman Noah Lawson on a ball hit by Alex Phillips scored another run making it 16-13, and Jake Henretta was hit by a pitch loading the bases for Peyton Hetrick, who singled home two runs making it 16-15 brining up Falgout, who doubled to left to win the game.

Five of the 11 hits went for doubles with Savage recording a pair and Bennett, Falgout, and Long one each.

Nick Beitel was 3-for-5 with three runs scored and two RBIs to pace Ligonier Valley, while Connor Tunstall was 2-for-4 with a walk, two runs scored, and three RBIs.

Punxsutawney used four pitchers with Justin Miller getting the win going one inning allowing five runs, four earned on four hits and a walk while striking out three.

COUDERSPORT, Pa. – Taking advantage of four Coudersport errors, six walks, and five hit batters, visiting Smethport handed the Falcons their first loss of the season, 11-7, while claiming its first victory of the year.

Alex Cole was also 1-for-1 with a walk, two runs scored, and two RBIs for Smethport with Kameron Rounsville walking once, getting hit by a pitch, and scoring twice. Alex Ognen was also plunked twice and was 1-for-3 with an RBI.

AJ Redmond and Ashton Huck each drove in two runs for Coudersport with Redmond drawing a walk and Huck going 1-for-3 with a double and a walk. Garrett Kellert was also 2-for-4 with a double and two runs scored for the Falcons, who fell to 7-1 with the loss.

Ognen got the win in relief of Brandon Higley going 2 ⅓ innings allowing two runs, one earned, on a hit, three walks, and a hit batter. He struck out seven, including the final two batters he faced after Coudersport had scored two runs and loaded the bases with one out in the bottom of the seventh.

Derek Easton started and was wild despite allowing just one earned run and a hit. He walked four and hit two while striking out two.

Jackson Glover pitched an inning and a third allowing four unearned runs on two hits, a walk, and three hit batters. He struck out one.

Hartman hit a batter but didn’t walk anyone while striking out nine.

Helping his own cause at the plate, Hartman was 3-for-4 with a run scored.

Ethan Lacinski also went 1-for-3 with a triple, a walk, an RBI, and two runs scored, and Jackson Smetak was 1-fro-4 with a double and two RBIs for Freeport.

Hunter Troutman went 2-for-3 for Karns City, while Luke Garing added a double.

April 30, 2021 D9 Softball: St. Marys’ Young Records All 15 Outs by Strikeout in Win over Brookville; Coudy Gets Victory
D9and10Sports to Broadcast City Classic Baseball/Softball Games in DuBois Saturday
We use cookies on our website to give you the most relevant experience by remembering your preferences and repeat visits. By clicking “Accept All”, you consent to the use of ALL the cookies. However, you may visit "Cookie Settings" to provide a controlled consent.
Cookie SettingsAccept All
Manage consent