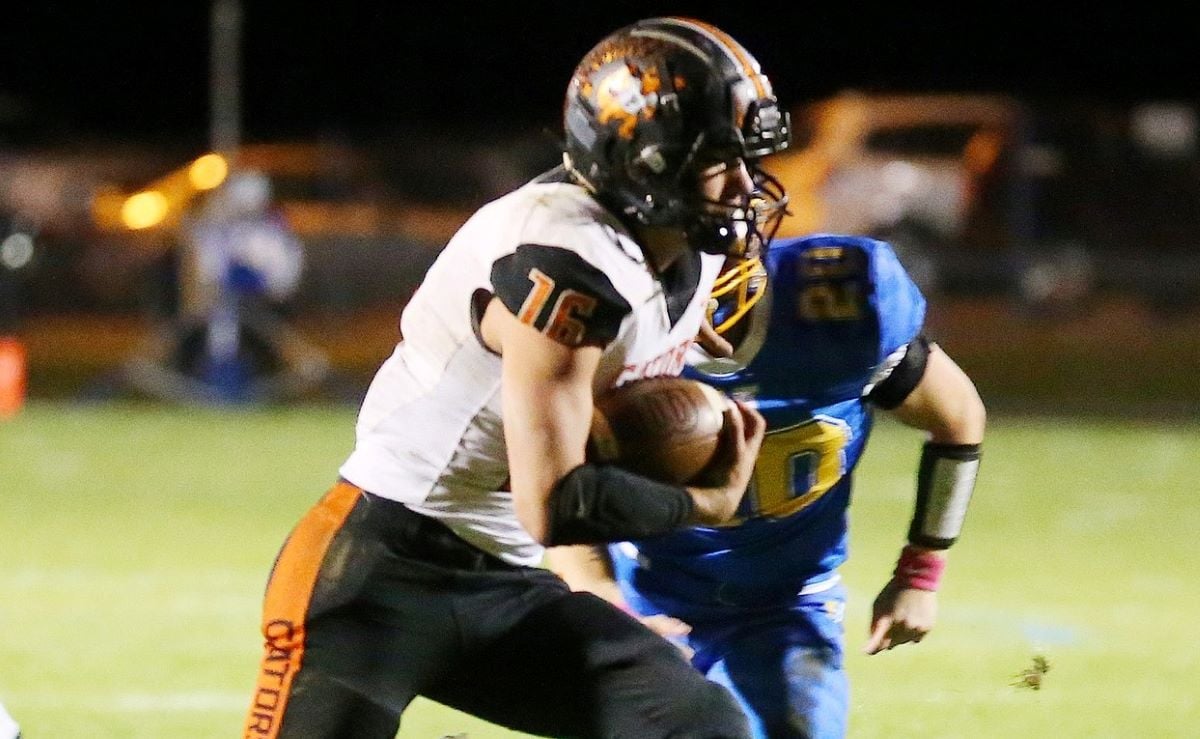 WARREN, Pa. – Blaine Moses was a force on both sides of the football for Port Allegany, and was a big reason the Gators got within two wins of a PIAA Class 1A title.

And it was that play on both sides of the football that earned the senior fullback/linebacker the 2022 YDL Sports Network/D9and10Sports.com Jim Kelly District 9 Football Player of the Year award powered by the Allegheny Grille in Foxburg

On offense, Moses was the leading rusher and touchdown scorer for the Gators rushing for 1,099 yards on 208 carries with 20 touchdowns. He also caught 16 passes for 149 yards and a score.

Moses was also the defensive leader for Port Allegany (12-2) making 132 tackles (10.2 tackles per game) with one interception and a ½ sack.

Joining Moses in being honored with major postseason awards are two of his Port Allegany coaches and one of his teammates.

In addition to the major awards, a first- and second-team All-District Offensive/Defense/Special Teams was also named and can be viewed below.

Ferguson, a Clarion-Limestone student, was the leading passer in District 9 with 2,727 yards on 132 of 235 passing. He was also tied for the D9 lead in TD passes with 33 while throwing 15 interceptions. A dual threat, Ferguson ran for 521 yards and seven touchdowns on 122 carries while helping the Wildcats to the District 9 Class 2A title.

Hummell, a Clarion-Limestone student, had a District 9-leading 154 tackles (12.8 TPG) to go along with four interceptions, a forced fumble, a fumble recovery, and a ½ sack for the District 9 Class 2A champion Wildcats. Making his season even more impressive was the fact Hummell played the entire year with a torn ACL suffered over the summer.

OFFENSIVE LINEMAN OF THE YEAR: Carson Neely, So., Port Allegany

Called the best offensive lineman on his team by his head coach, Neely helped pave the way from his left guard position for a Port Allegany offense that averaged 31.5 ppg (5th in D9), 310.8 yards per game, and 207.9 yards per game on the ground while having eight 100-yard rushers.

Samsel was a one-man wrecking crew from his defensive line position recording 88 tackles (7.3 per game) including 23.5 tackles for a loss and four sacks while recovering one fumble.

ROOKIE OF THE YEAR: Drew Keth, So., Keystone

Keth entered the season as the backup quarterback for the Panthers but was thrust into a starting role when starter Rayce Weaver was lost for the season in Week 5.

He responded by going 38 of 69 passing for 513 yards and eight touchdowns and seven interceptions as the starter (on the year he was 49 of 98 for 757 yards, 10 TDs, 9 Ints) while leading Keystone to its first playoff win in 33 years.

But Keth didn’t win the award for just his play at quarterback, he was also a starter in the secondary for the Panthers and had five interceptions to go with 29 tackles.

Hetrick was dynamic as both a kicker and a punte for the Chucks.

As a kicker, he was 2 of 6 in the field goal department with a long of 42 (a couple of his misses were from over 40) while also going 27 of 29 on PATs. He added a pair of touchbacks on 47 kickoffs with his kickoffs averaging to the opponent’s 17-yard line.

Hetrick may have been even better as a punter finishing with the highest average per punt in District 9 among punters with at least 20 boots at 36.3 yards per punt. He placed four of his 26 punts inside the 20-yard line.

Bienkowski led Port Allegany to its third District 9 title (the others were in 2011 and 2012 also in Class 1A) and to the PIAA semifinals for the second time in school history (the other time was in 2012).

The Gators showed a six-win improvement from a year ago going from 6-5 in 2021 to 12-2 in 2022. Those were Port Allegany’s first two winning seasons since finishing 6-5 in 2015 and marked the first time since having four straight winning campaigns from 2009-12 that the Gators had back-to-back winning seasons.

Saltsman was in charge of the Port Allegany defense which allowed a D9-leading 11.8 points per game with two shutouts and eight games holding opponents to less than 10 points.

In a 36-15 win at Juniata Valley, McGarry had a performance to remember accounting for 448 yards of total offense and five touchdowns, including a defensive score.

Three of those touchdowns came in the game’s final 6:38 to help turn a 15-all tie into a three-score blowout.

On the night, McGarry was 19 of 37 passing for 333 yards, two touchdowns, and an interception while rushing 13 times for 115 yards and two touchdowns. On defense, he made eight tackles and added the pick-6.

In a game that saw three lead changes in the fourth quarter alone, it was a defensive play as time ran out that gave DuBois a 27-26 win.

Trailing by the point and with its kicker having been lost to an injury earlier in the game, Brockway was forced to go for the touchdown from the DuBois 5-yard line with just seconds left on the clock having driven from its own 31.

Brayden Fox hits Alex Carlson with a slant pass, but DuBois’ Garret Frantz tackled Carlson at the 1-yard line to preserve the win.

DuBois entered the fourth quarter trailing 20-18 before turning a Brockway fumble and then a Rover penalty into a 31-yard field goal by Cullen McAllister to take a 21-20 lead early in the quarter.

Brockway answered back when Fox hit Carlson with a 12-yard touchdown pass with 7:43 to play to put the Rovers back in front, 26-21.

It took DuBois less than three minutes to go in front for good when Kaden Clark scored on a 6-yard flip pass from Cam-Ron Hays with 5:05 to play to take the 27-27 advantage.

Austin Henery ran 15 times for 74 yards and two touchdowns to lead DuBois with Hayes adding 15 carries for 85 yards to go with the touchdown pass.

Fox was 20 of 30 passing for 236 yards and three touchdowns for Brockway with Carlson catching eight passes for 89 yards and two scores.

To say Crants loves high school sports and the athletes would be an understatement.

The unofficial/official photographer of Port Allegany sports for many years, Crants takes pictures of every Gator sport in every season and goes beyond just photographing varsity sports doing a number of junior varsity and junior high contests and younger ages.

And it’s not just about Port Allegany athletes.

Crants takes photos of both the Gators and their opponents at every event, and during football season even goes to the length of making sure both bands have pictures taken.

While Crants sell high-resolution copies of his photos and has a hand in the senior banners made for the Gators, he also posts all his photos (low-resolution) on Facebook for community use (including for use by the YDL Sports Network).

Crants care and love for all in the Port Allegany area is unmistakable.

End of the Line: 30-point Fourth Quarter Not Enough for Port Allegany in PIAA 1A Semifinal Loss to Union (New Castle)
2022 Jim Kelly YDL Sports Network District 10 Football Awards Powered by Allegheny Grille of Foxburg Chosen; All-District Team Named
This website or its third-party tools process personal data.In case of sale of your personal information, you may opt out by using the link Do not sell my personal information.
×
Manage consent