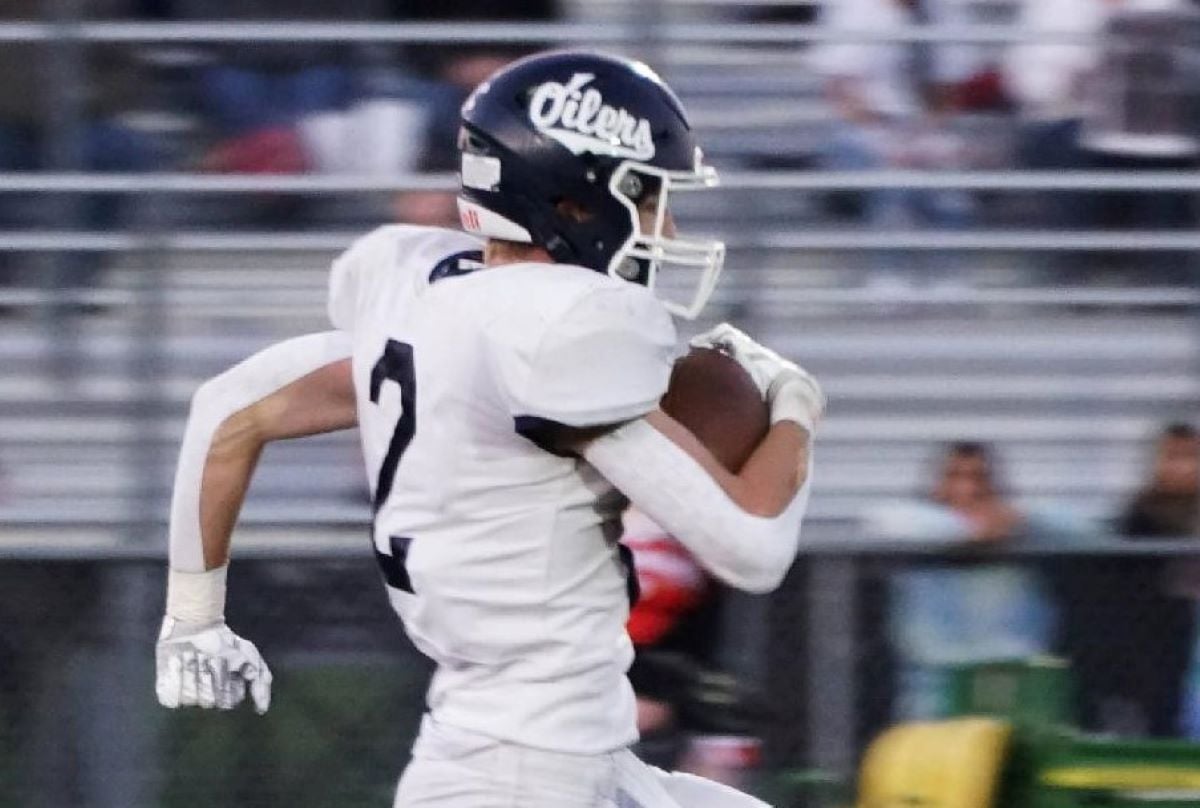 WARREN, Pa. – Oil City’s Ethen Knox put together one of the most remarkable seasons in District 10 history, garnering national headlines along the way.

The Oilers finished the season 7-3, with Knox ranking second in the nation in rushing yards among teams that enter their stats on MaxPreps with 3,705 yards. That, along with his defensive prowess (6 interceptions, 63 tackles) earned the junior the 2022 YDL Sports Network/D9and10Sports.com Jim Kelly District 10 Football Player of the Year award powered by the Allegheny Grille in Foxburg.

Knox had 41 rushing touchdowns, averaging 370.5 yards per game on the ground, and rushed for at least 400 yards in six games, including four in a row from Week 2 through Week 5. That broke a national record for most games with 400-plus yards in a season, a record that was held by current Tennessee Titans star Derrick Henry.

Knox was also a ball hawk on defense, recording six interceptions to go along with 63 tackles. In addition to Player of the Year, Knox is also nabbed Individual Performance of the Year as well.

In addition to the major awards, a first- and second-team All-District Offensive/Defense/Special Teams was also named and can be viewed below.

Jim Kelly’s name is used with the permission of Jim Kelly.

Walker was the leader of a Meadville defense that earned four shutouts on the way to their second consecutive D10 Class 4A title. He totaled 95 tackles, including 15 tackles for loss, as well as 11 sacks. He is the second consecutive Meadville player to win the award, joining Griffin Buzzell, who now plays collegiately at Clarion.

Cousins has established himself as one of the nation’s premier offensive line prospects, with the 4-star recruit holding a commitment to Penn State. This season, he paved the way for a McDowell rushing attack that was by 2,000-yard rusher Artis Simmons. The Trojans averaged 43.2 ppg., going 10-3, dropping a triple-overtime thriller to State College in the PIAA playoffs.

Owens was a game-wrecker for a Farrell defense that pitched three shutouts on its way to the District 10 Class 2A title and allowed just 13 ppg. He finished the season with 64 tackles, including 13 tackles for loss to go along with nine sacks and three fumble recoveries.

McCullough earned a spot in the starting lineup on a talented Sharpsville squad as a freshman and made the most of it. He notched five interceptions, including a pick six, and a game-sealing INT in the Blue Devils’ regular-season finale against Fort LeBoeuf, as well as 28 tackles for a Sharpsville team that went 9-3 and reached the D10 Class 2A title game.

The Maryland baseball commit is also a standout on the gridiron, earning the special teams award for the second year in a row.

Constable converted 9-of-14 field goals, including a school-record 51-yarder, and was 40-of-42 on extra points.

Mowrey directed the Eagles to their second consecutive District 10 Class 3A title in 2022, with both title game victories coming against Slippery Rock.
The Eagles got off to a 1-2 start with losses to powerhouses Avonworth and Farrell before winning five of their final six games to finish the regular season 6-3. They then ran the gauntlet in the 3A playoffs, beating Fairview 35-21 and coming from behind to beat Sharon, 22-21 before beating Slippery Rock for a second time, 42-23.

Conley served as the offensive coordinator and quarterbacks coach for the Ramblers for first-year head coach Mike Krahe, who replaced the legendary Mike Mischler. The Ramblers scored at least 40 points in a game, including a 41-0 win over rival McDowell on Sept. 30. The Ramblers, after a long layoff, fell 21-14 in the PIAA Class 5A quarterfinals to eventual state champion Pine-Richland.

Knox showed off all facets of his game in a 55-6 win over Corry. He carried 26 times for his first 400-yard game of the season (402), an average of 15.5 ypc. to go along with a school-record seven touchdowns with a long of 81. Remarkably, he also had a touchdown called back in the game on a penalty.

If that weren’t enough, Knox also had six tackles and an interception on defense, his first of six picks on the campaign.

The first of two meetings between the teams (the second was a Grove City win in the D10 3A title game) produced an instant classic.

Tied at 14 late in the fourth quarter, Slippery Rock went on an 11-play, 79-yard drive, capped by a William Mokel 22-yard touchdown pass to John Sabo that, coupled with Nick Kingerski’s extra points, made it 21-14 with 49 seconds remaining. The touchdown was initially ruled incomplete before officials overturned the call.

Grove City got the ball back at its own 35, and Hunter Hohman rushed to midfield, with a late hit tacking on another 15 yards. Hohman then completed a 22-yard pass to Nate Boyd before hitting Nathan Greer with a 13-yard touchdown with 18 seconds remaining.

Coach Sam Mowrey and the Eagles decided to go for two, with Hohman running in the game-winning conversion.

Hohman finished with 126 yards passing and 67 rushing, while Greer had six receptions for 76 yards.

Mokel threw for 173 yards, 63 of which went to Sabo, while Maddox Allen had 101 yards rushing for the Rockets.

Penny Weichel has been covering sports in District 10 for quite some time, starting at The Derrick (Oil City) in the early 1970s. She is believed to be one of if not the first female sports editor at a Pennsylvania newspaper.

She began working with current Derrick Sports Editor Ed Brannon in 1992 and later transitioned to the news side, where she worked until her retirement.

Sports has remained in her blood, however, as she founded route8rivarly.com, a website dedicated to covering all things Oil City and Franklin sports.

Originally, she founded ocpafootball.com and franklinpafootball.com, and the information from those sites can be found on the new site as well. Quite simply, it’s the most comprehensive source of information for the history of Franklin and Oil City sports (along with Venango Catholic), with Penny constantly keeping it up to date with the current teams as well.

Penny’s love for local sports and student-athletes knows no bounds, and her knowledge and longevity are matched by few, if any, in District 10.