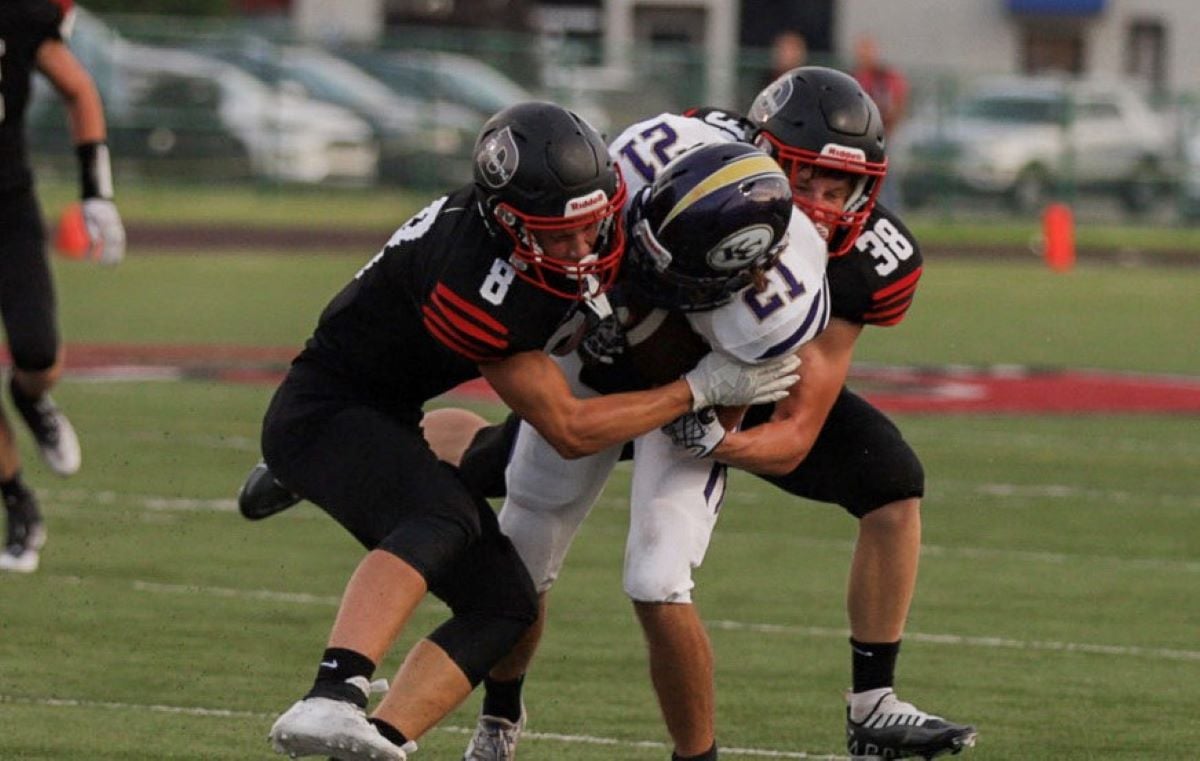 Garret Frantz (No. 8), shown here making a tackle vs. Karns City last week, came up with the game-saving play for DuBois at the goal line Friday night. Photo by Anna Mattivi

DUBOIS, Pa. – Garret Frantz’s tackle of Alex Carlson at the 1-yard line as time ran out lifted DuBois to a 27-26 win over visiting Brockway at Mansell Stadium.

Brockway had driven from its own 31-yard to the DuBois 5-yard line where the Rovers had one play left to win the game.

That play was a slant to the outside receiver, Carlson, but Frantz fought around a pick from Brockway’s Matt Pyne to contact Carlson as he caught the ball at the 2-yard line. Carlson was able to fight to the one but was held out of the end zone as time expired.

DuBois took the one-point lead with 5:05 left to play when Kaden Clark scored on a 6-yard flip pass from Cam-Ron Hays, as he beat the Brockway defenders to the front pylon on the far side of the field. The two-point conversion pass failed.

Carlson hauled in a 12-yard TD pass from Fox with 7:43 to play, but DuBois stuffed the Rovers 2-point try. DuBois answered right back with a touchdown drive of its own, driving 55 yards in seven plays.

Kaden Clark capped the drive when he took a shovel pass from Cam-Ron hays while in motion and beat the Brockway defense to the left pylon to put the Beavers back up 27-26 with 5:05 remaining. DuBois’ 2-point try also failed.

That was the third lead change of the fourth quarter.

Trailing 20-18 entering the final 12 minutes after leading 12-7 at the half, DuBois recovered a fumble and then took advantage of a Brockway penalty to take a 21-20 lead on a 31-yard field goal from Cullen McAllister.

After the Beavers recovered an unforced fumble inside the 15-yard line, they had to settle for a 36-yard McAllister field goal attempt after an unsportsmanlike penalty backed them up.

McAllister’s kick was short, but Brockway went offsides on the play – the officials allowed the play to continue despite the offsides – giving McAllister another shot at the kick five yards closer, which he nailed.

Not to be deterred, Brockway came right back and took a 26-21 lead on a 12-yard Brayden Fox to Carlson touchdown pass with 7:43 left.

Austin Henery ran for 74 yards on 15 carries and two touchdowns, both in the first half, for DuBois. Hays also scored on the ground for the Beavers rushing 15 times for 85 yards.

Fox was 20 of 30 passing for 236 yards and three touchdowns for Brockway with Carlson catching eight passes for 89 yards and two scores.

DuBois is 2-0 for the first time since 2014, while Brockway fell to 1-1 with its two games being decided by a total of four points.

Rewatch the Generational Wealth Management Extra Point Show with JB Graphics with interviews from a variety of players from around District 9 and District 10.

Karns City ran 79 plays for 396 yards compared to Redbank Valley’s 39-296 numbers, but the Bulldogs (2-0) held the Gremlins scoreless on five possessions that went inside the 25-yard line.

Kahle’s 72-yard interception return for a touchdown put the Bulldogs up 19-7 in the third quarter and the teams traded touchdowns from there as Luke Cramer got the Gremlins within 19-13 with his 4-yard run three plays into the fourth quarter. But the Bulldogs scored on the first play of the ensuing possession when Cam Wagner’s flip pass to Aiden Ortz went on 57 yards to the end zone.

The Gremlins scored a safety with 1:33 remaining, one play after getting stopped at the 1 by the Bulldogs’ defense on a fourth-and-goal play from the 3.

Wagner hit Kahle for a 6-yard TD pass to start the game’s scoring in the first quarter. Karns City went up 7-6 on Cramer’s 1-yard run with 7:24 left in the second quarter. Five plays later, the Bulldogs went up 12-7 on Wagner’s 3-yard pass to Ortz.

Wagner completed 13 of 19 passes for 178 yards and three touchdowns with one interception. Ortz caught four passes for 82 yards while Tate Minich grabbed six passes for 55 yards. Drew Byers rushed for 109 yards on 16 carries.

Cramer led the Gremlins (0-2) with 89 yards rushing on 18 carries. Mason Martin, subbing in for injured quarterback Eric Booher who did play on defense, completed 13 of 21 passes for 133 yards while rushing for 59 yards on 11 attempts.

Karns City is 0-2 for the first time since 2017 when they finished when the Gremlins finished 7-5 and won the D9 title.

The Hubbers trailed 6-0 at halftime but took an 8-6 lead on a Preston Alfieri touchdown pass to Ryan Mason in the third quarter. Alfieri added two more scoring passes in the fourth quarter and finished the game 5 of 9 for 59 yards. He also threw an interception and added 29 yards rushing on 10 carries.

Mason caught a pair of scoring passes for Smethport (1-1) and had five catches for 44 yards while rushing for 22 yards.

Jameson Britton scored the lone touchdown for Cameron County (0-2) on a 1-yard run in the first quarter, but the Red Raiders managed just 74 yards of total offense being outgained 154 to 74.

The win was the first for first-year Smethport head coach Joel Lent.

The Crusaders were outgained by the Warriors 255 yards to 154 and had just six first downs to Moniteau’s 14.

But ECC forced three turnovers, one of which led to a short TD run, and scored a special teams touchdown to secure the win.

The Crusaders’ first score came on a 13-yard Noah Cherry touchdown run late in the first half one play after David Anderson picked off a David Dessicino pass at the 46-yard line and returned it 33 yards to the 13.

Down eight at halftime, Moniteau got its lone touchdown on a 1-yard Logan Campbell run in the third quarter to get within two, 8-6, but Ben Reynolds returned the ensuing kickoff 80 yards for a touchdown to push the lead to nine, 15-6.

ALEXANDRIA, Pa. – Scoring the final 21 points of the game in the game’s final 6:38, Curwensville kept its perfect season alive with a 36-15 win at Juniata Valley.

McGarry had himself a game scoring three touchdowns – two on the ground and one with the pick-6 – and throwing for two more. He was 20 of 38 passing for 320 yards with an interception and the two scores. He also ran 12 times for 115 yards and two touchdowns.

Curwensville had 459 yards of total offense in the game.

Andrew McMonagle rushed for 93 yards on 26 carries for Juniata Valley, his TD run tying the game at 15-15 midway through the third quarter.

RIMERSBURG, Pa. – Kyle Nellis ran for 140 yards on 16 carries and scored three touchdowns to lead Keystone to a 43-7 rout at Union/A-C Valley at Vidunas Stadium.

Nellis scored on runs of 39, 6 and 10 yards, leading a Panthers running game that piled up 242 yards against the Falcon Knights. Tyler Albright ran for 95 yards on nine carries and returned a fourth-quarter interception 38 yards for a touchdown. Albright had two interceptions in the game giving him five on the young season.

The Panthers (2-0) started the game with Haden Foster’s blocked punt that was returned seven yards for a touchdown by Elijah Will. Rayce Weaver added a 1-yard run late in the first half that gave the Panthers a 22-0 halftime lead.
The lone score from Union/ACV came midway through the third quarter when Brody Dittman threw a 9-yard TD pass to Skyler Roxbury. Mikey Card ran for 71 yards on 11 carries.

BRADFORD, Pa. – Gavyn Ayers ran for three touchdowns and passed for another to lead Coudersport to a 38-27 win at Parkway Field.

Bradford blocked a punt and Greg Tyler recovered in the end zone for a touchdown to get the Owls to within 30-27 with 5:50 left, but Ayers’ third TD run from nine yards out set the final with 1:47 left.

Ayers completed 3 of 4 passes for 66 yards while running for 20 yards on nine carries with three TDs. Ethan Ott ran for 153 yards on 26 carries.

Reese completed 26 of 47 passes for 309 yards with two TDs and one interception. Perry caught five passes for 79 yards while Lukas Laktash caught six passes for 49 yards with a touchdown. Troy Adkins had nine receptions for 74 yards.

KANE, Pa. – Zeke Bennett ran for 206 yards and three touchdowns to lead Punxsutawney to a 37-16 win at Kane.

Chucks quarterback Seth Moore threw for 133 yards and connected with Noah Weaver for two touchdown passes as they improved to 2-0.

Both of Kane’s scores came on runs from Ricky Zampogna, who ran for over 150 yards.

The Raiders (0-2) were supposed to host the Golden Eagles (2-0), but electricity wasn’t fully restored to the football stadium from the offseason construction project. So the Raiders took their longest road trip for a first-ever meeting with the Eagles who limited them to five first downs and 115 yards of offense.

Noah Peterson, starting at quarterback for the first time for the Raiders, completed 5 of 8 passes for 20 yards with an interception. Toni Ceriani rushed for 56 yards on 11 carries while Carson Weaver finished with 44 yards on 16 carries.

Walk completed 11 of 17 passes for 172 yards with Gampe accounting for six completions covering 100 yards with a 30-yard TD catch in the second quarter and a 5-yard TD in the third.

Coudriet was 11 of 17 passing for 254 yards, three touchdowns, and an interception while rushing 12 times for 80 yards.

Carter Chadsey caught two of those scoring tosses and finished with five catches for 91 yards.

Logan Mosier went over 100 yards receiving catching three passes for 117 yards and a touchdown, while Collin Reitz had three grabs for 91 yards.

Matthew Davis scored a rushing touchdown for the Dutch and carried the ball nine times for 49 yards, and Justin Dornisch had 11 carries for 58 yards,

Cameron Larkin threw a touchdown pass for Ridgway but was just 4 of 17 for 57 yards and also was picked off once. Larkin also ran for 25 yards.

Aiden Zimmerman caught the touchdown pass, a 30-yard catch, his lone catch of the game.

Ridgway was limited to 98 yards of offense, including just 41 on the ground.

Hotchkiss Rebounds from Tough First Half to Lead Central Clarion Comeback Win at Port Allegany
300 Wins: Clearfield’s Janocko Gets 300th Victory as Clearfield Downs BEA 7-3
This website or its third-party tools process personal data.In case of sale of your personal information, you may opt out by using the link Do not sell my personal information.
×
Manage consent