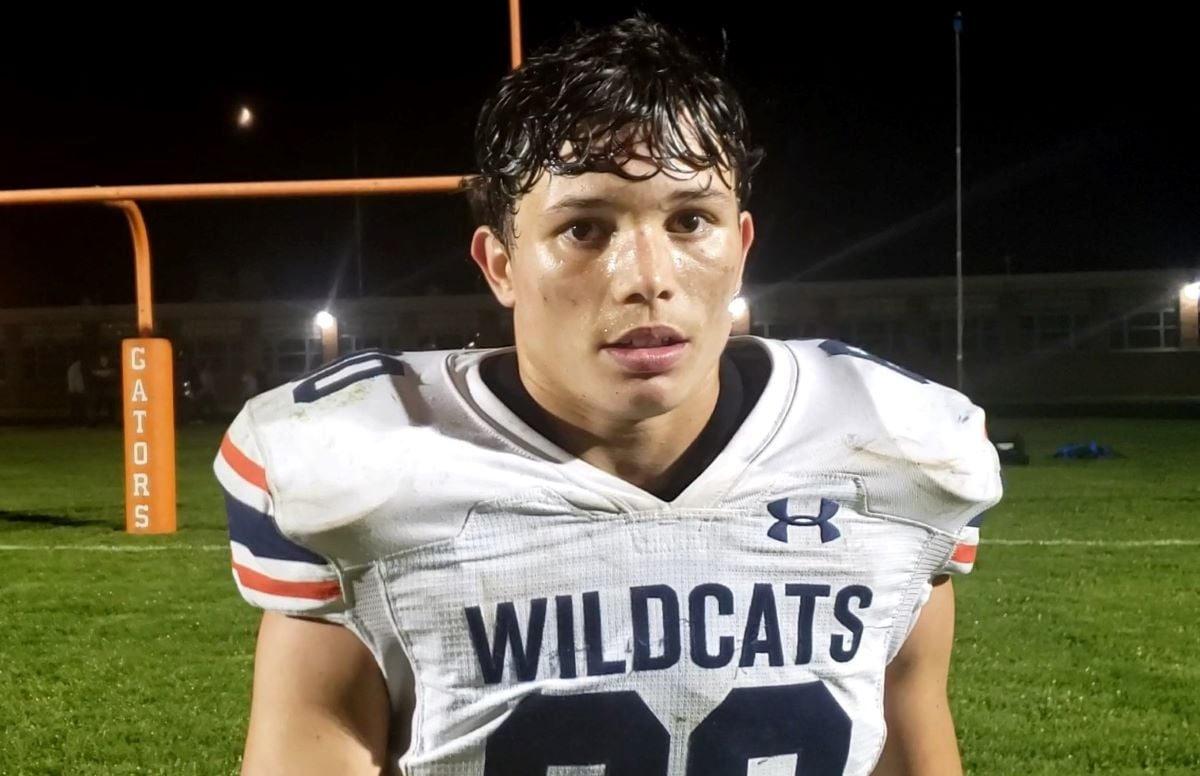 PORT ALLEGANY, Pa. – It was probably a first half that Cental Clarion wide receiver Dawson Hotchkiss wished he could forget.

In the half, Hotchkiss had a pass bounce off his hands and returned for a pick-6 and had a potential touchdown catch slip through his fingers.

But the Wildcats senior from North Clarion High School didn’t allow the first half to define him nor the game scoring three times after the break to lead Central Clarion to a 29-24 come-from-behind victory at Port Allegany.

“All I knew was I gave up a pick-six,” Hotchkiss said. “I got chewed out in the locker room, but I knew I had to rebound from that.”

Hotchkiss was named the Allegheny Grille of Foxburg Player of the Game and talked about his performance, which included four catches for 91 yards.

The halftime chewing-out message was read loud and clear from the very start of the second half, as Hotchkiss returned the opening kickoff of the second half 95 yards to get the Wildcats within two points, 16-14, after they trailed 16-7 at the break.

Hotchkiss wasn’t close to being down in the quarter.

Just under three minutes later, he hauled down a 20-yard touchdown pass from Jase Ferguson to give Central Clarion the lead, 21-16, and then late in the quarter, he caught a 49-yard scoring pass from Ferguson to put the Wildcats ahead, 29-16.

“I will be honest, I told Dawson Hotchkiss he didn’t have a great first half,” Central Clariion head coach Davey Eggleton said. “I said it’s time to make up for it right now. And, boy, did he.”

While Hotchkiss gave Central Clarion (2-0) a two-touchdown lead, Port Allegany, which led 16-0 at one point, didn’t go away quietly.

The Gators (1-1) rode the legs of quarterback Drew Evens to an early fourth-quarter touchdown that was scored on a 1-yard run by Blaine Moses after Evens did most of the heavy lifting on quarterback keepers.

Port Allegany then got the ball back and drove to the Central Clarion 35-yard line with just over two minutes to play only to see Brady Quinn intercept an Evens pass.

The Wildcats, though, couldn’t run the clock out and were forced to punt the ball back to the Gators, who took over at their own 45-yard line with 46 seconds left and no times outs.

After two straight incomplete passes, Tommy Smith ended the game for Central Clarion when he picked off an Evens throw, the third interception of the Port Allegany QB by the Wildcats’ defense.

After a lackluster first quarter that saw neither team score, things turned wild in the first 1:40 of the second quarter with three total touchdowns.

After stuffing a fake punt attempt by Central Clarion, the Gators took over at the Wildcats’ 29-yard line late in the first quarter and turned that into a 26-yard Evens to Noah Archer touchdown pass on the first play of the second quarter just seven seconds into the quarter. An Evens to Archer 2-point pass made it 8-0.

Freshman Nick Wilfong got in on the action just 13 seconds later when he picked off a Ferguson pass that bounced off the hands of Hotchkiss and returned it 44 yards for a touchdown. Evens ran in the 2-point conversion and it was 16-0 at the 11:40 mark of the second quarter.

It took the Wildcats just 1:20 to respond, as Ferguson hit Ashton Rex in the open field, and Rex went 50 yards for a score at the 10:20 mark that with the extra point made it a 16-7 game.

“That was huge,” Eggleton said. “It was a big play. We knew our athletes kind of had the advantage, and I think it showed at times.”

Ferguson was 13 of 22 for 276 yards, three touchdowns, and an interception. Rex had two catches for 77 yards and a score, while Smith had three catches for 58 yards and Dawson Smail three for 55.

Smail caught a 36-yard pass on third-and-35 from the Central Clarion 10-yard line that set up the third Hotchkiss touchdown.

What the Wildcats couldn’t do was run the ball, as they were limited to 32 yards on 17 carries by the Port Allegany defense.

Port Allegany was more balanced on offense gaining 144 on the ground and 165 through the air.

Evens carried the ball 14 times for 79 yards with Moses rushing 17 fo 56 and the touchdown.

Evens was also 17 of 33 passing for 165 yards, a touchdown, and four interceptions.

Archer caught nine passes for 103 yards and the score and added 18 yards rushing.

McLane’s Defense Stifles Fort LeBoeuf to Give McCormick First Victory as Coach
W2 D9 Recaps: Frantz’s Tackle Saves the Night for DuBois; Redbank Tops Karns City
This website or its third-party tools process personal data.In case of sale of your personal information, you may opt out by using the link Do not sell my personal information.
×
Manage consent