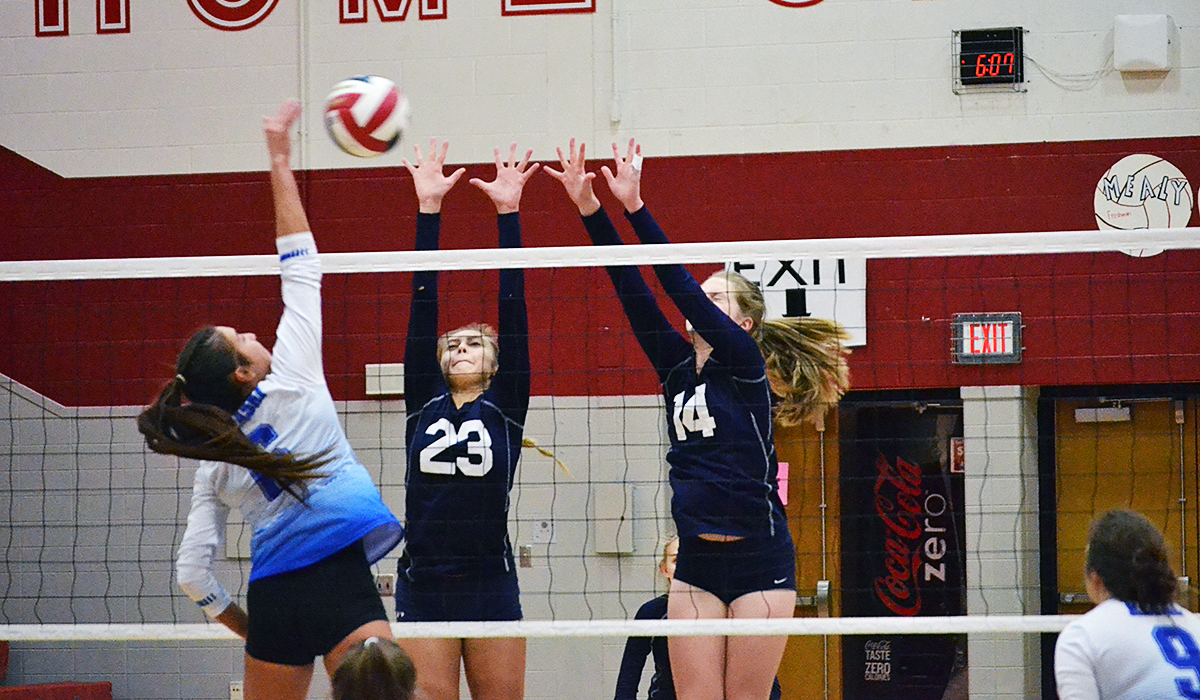 MEADVILLE, Pa. – Sometimes one play can change the entire course of a game.

That was certainly true during the District 10 Class 3A Volleyball Semifinal between Villa Maria and Warren Thursday night.

(Villa’s Bella Taraski tries to put down a kill between Warren’s Halee Mineweaser (23) and Alexia Bowers (14). Taraski finished with seven kills in the Victors’ 3-1 win over the Dragons. Photo by Brian Hagberg)

“(That was) a very big confidence booster,” Villa head coach Mike Resurreccion said of the long rally point. “We have a tendency to lose those long rallies which changes the momentum and tempo of the game for us. For us to stay in those rallies and to capitalize on easy points at the net, really helped us and boosts our morale.”

The play shifted all the momentum to Villa as Warren scored just 13 points the rest of the way.

It was Warren that seized the momentum early, however. Villa led the first set, 18-14, but the Dragons responded with an 11-3 run to close it out and take a 1-0 lead in the match.

“I knew we were going to be slow out of the gate, Warren is very scrappy,” Resurreccion said.

The loss seemed to serve as motivation as the Victors jumped out to a 7-2 lead to start the second. The Dragons battled and got to within a point at 16-15, but Villa answered with a 5-1 run to take a 21-16 lead. Warren got back to within two, 23-21, but Villa scored the final two points to even the match, 1-1.

“(The loss) definitely was (motivation), we weren’t playing as team-like as we normally do,” Villa’s Kasey Smith said. “But we really brought it for the last three.”

The teams battled through the early portion of the third set. Villa looked poised to pull away, but couldn’t build more than a 4-point advantage until the long rally set the stage for the final 1 1/2 sets.

Warren’s Katie Madigan finished her career with another monster game, 22 kills, 20 digs and two aces. Carly Beers and Kylie Fehlman each had nine kills, while Ellee Irwin had five kills and 10 digs and Summer Lucks had 22 digs.

“Having the student section and our bench behind us . . . our fans do an amazing job of hyping us up,” Conneaut’s Kaylee Mattera said.

The second set was a true back-and-forth battle. Neither team led by more than three points until Conneaut closed it with a 5-0 run. The set saw eight lead changes and 13 ties throughout.

Conneaut took a 7-6 lead in the early part of the third set. Fort LeBoeuf tied the match four times, but couldn’t get the penultimate point to take the lead until late in the set. The Bison grabbed a 23-22 advantage and the Eagles took a timeout to talk things over.

“They worked too hard to get to that point and give the third set away,” Conneaut coach Christine Krankota said. “We challenged them to dig in and play the way they had been playing especially at the beginning of the game. And they did.”

The Eagles took the final three points to come away with the win and a trip to the D10 championship.

Mattera had 16 kills and five digs. Sylvia Prebor had four kills and five blocks, while Rylee Jones had 12 digs and Amber Clark had 11 digs and ran the offense with 30 assists.

Conneaut and Villa will meet for the District 10 Class 3A championship Saturday at a time and location to be announced.

Nov. 4, 2021 District 9 and District 10 Volleyball and Soccer Playoff Scores
Villa Maria, Fairview Claim D10 Class 2A Soccer Titles
We use cookies on our website to give you the most relevant experience by remembering your preferences and repeat visits. By clicking “Accept All”, you consent to the use of ALL the cookies. However, you may visit "Cookie Settings" to provide a controlled consent.
Cookie SettingsAccept All
Manage consent