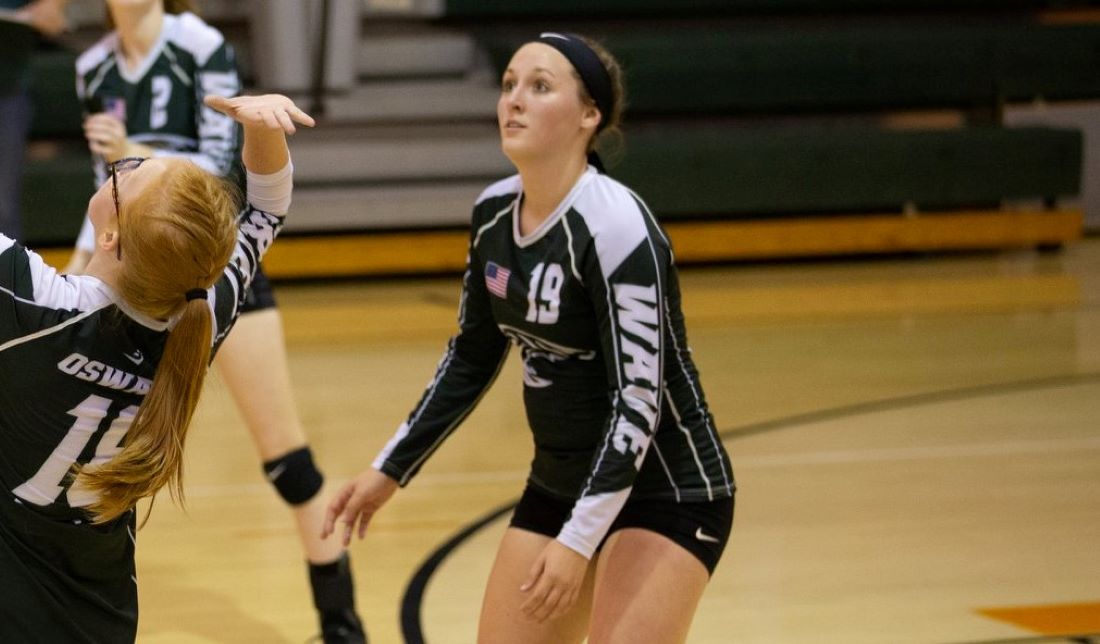 Jadyn Brabham helped lead Oswayo Valley into the D9 title game while clinching a berth in the PIAA playoffs for the first time in school history. Photo by Patrick Crants. See more of Crants work here.

“Wow, these girls are determined,” Oswayo Valley head coach Rachelle Kellogg said. “I never thought we would be here, and look at them now. I figured maybe next year when they were seniors. They are still undefeated and made OV history.”

“Coming into tonight, there was a lot of mixed feelings knowing what ECC had as the girls studied them,” Kellogg said. “They knew where they hit and their defense, but at the end of the second (set) I knew going into the third there was no looking back with our hitters and Trinity running our offense. It was going to be hard for them to stop us.”

Trinity is Oswayo Valley setter Trinity Lundy, who had 39 set assists while adding eight digs and an ace.

Also for the Green Wave, who are unbeaten on the year, Praylan Perskins added three kills, 18 digs, two set assists, and a block.

Tori Newton paced second-seeded ECC with 16 kills, while Moira Stanisch ran the offense for the Lady Crusaders with 18 set assists.

“It’s always tough to lose, and this is not how we planned on ending our season,” ECC head coach Tricia Bauer, whose team suffered its first defeat, said. “We had a few tough breaks, but overall the girls played a good game.”

Oswayo Valley will take on three-time defending District 9 and defending PIAA champion Clarion in the title game at 6:30 p.m. Thursday, Nov. 4, at Elk County Catholic High School in a match that will be broadcast on D9and10Sports.com.

“With only losing two seniors from last year we had a strong returning group who got the championship game experience,” Keystone head coach Bryan Mong said. “Their goal since (losing in last year’s title game to Redbank Valley) has been to return to the championship. We are happy to now have a chance play for it.”

The Lady Panthers’ defense was paced by Kennedy Kaye with 11 digs.

“Having the week off with the bye was a double-edged sword,” Mong said. “We were able to heal some bumps and bruises but came out a little rusty. It’s hard to simulate game speed in practice sometimes.”

Keystone will take on defending champion Redbank Valley in the title game at 6:30 p.m. Thursday, Nov. 4, at A-C Valley High School. A win would send the Lady Panthers to the PIAA playoffs for the first time since 2001 when they finished second in District 9 Class 1A. Keystone hasn’t won the D9 title since 1992 when it won in Class 2A.

“I think everybody doubts if they’ll go to the finals,” Redbank Valley head coach Ashley Anderson said when asked about the Lady Bulldog struggles at times this season. “We struggled right after quarantine (Redbank Valley had a COVID-19 quarantine in September). But they definitely picked it up. They had goals, and they’re definitely fulfilling those goals.

The big first set win set the tone for the night for Redbank Valley, who also got six Taylor Ripple kills and four each from Paytin Polka and Izzy Bond.

“I thought our offense looked really good,” Anderson said. “I told them our offense is swinging and they went out and showed up and that’s what I was expecting them to do.”

Ashton Pangallo chipped in four set assists, a block, and a kill for the Lady Raiders.

Redbank Valley, which is looking for its fourth title since 2016 but its first back-to-back championship in school history, will get a rematch with Keystone in the title game at 6:30 p.m. Thursday, Nov. 4, at A-C Valley High School.

The Big Red will face Cochranton in the title game.

No other information was available.

The Cardinals will take on West Middlesex in the title game.

High Five: Brockway Boys Beat Elk County Catholic for Fifth Consecutive D9 Crown
Nov. 3, 2021 District 9 and District 10 Volleyball Playoff Scores
We use cookies on our website to give you the most relevant experience by remembering your preferences and repeat visits. By clicking “Accept All”, you consent to the use of ALL the cookies. However, you may visit "Cookie Settings" to provide a controlled consent.
Cookie SettingsAccept All
Manage consent