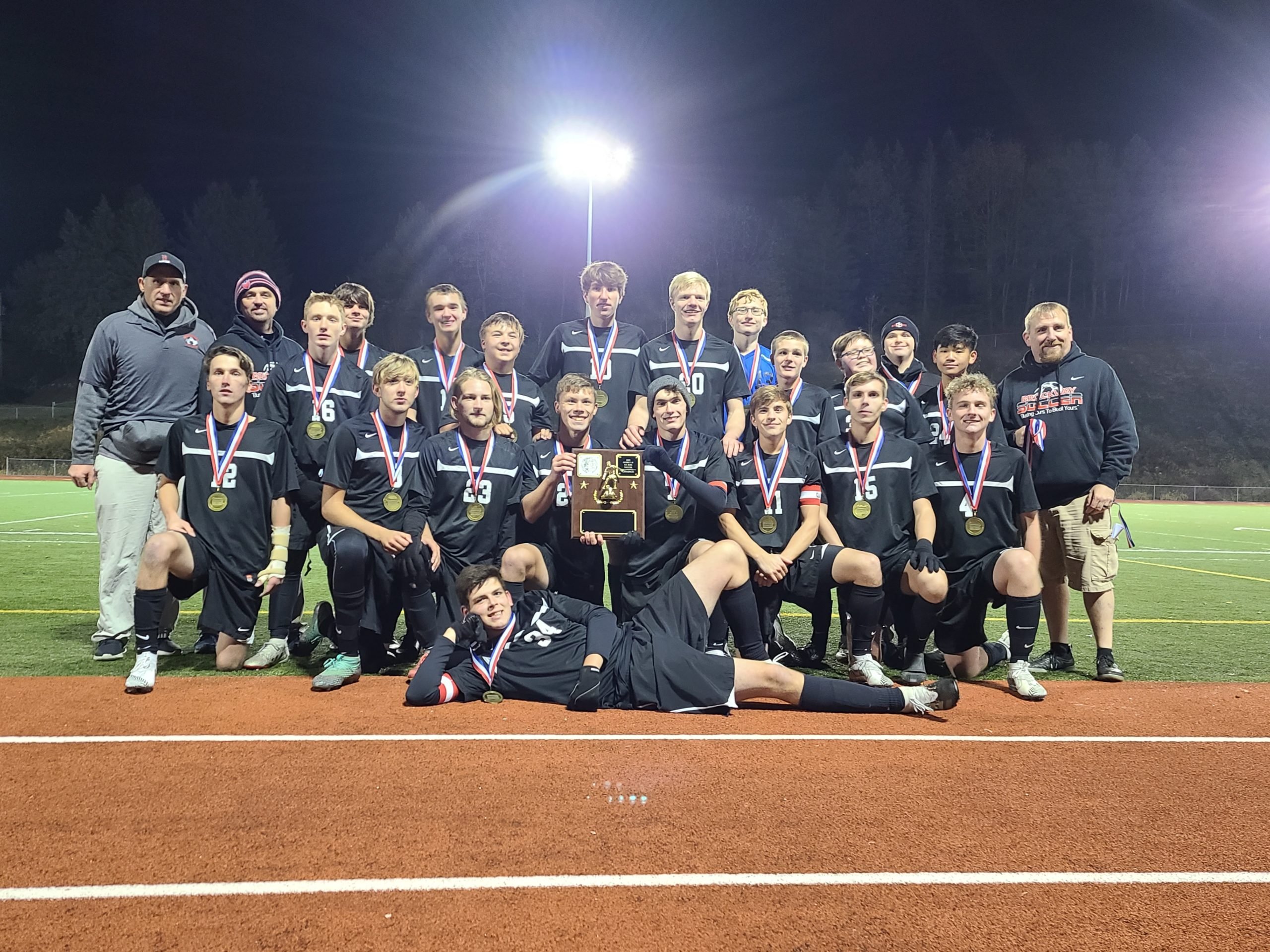 DUBOIS, Pa. – The Brockway Rovers are quite a handful – literally.

The Rovers continued their run of dominance on Tuesday, beating Elk County Catholic 8-0 for their fifth-straight District 9 Class 1A boys soccer championship.

The Rovers had three players – seniors Dylan Antonuccio and Nolan Swanson, as well as sophomore Dylan Bash score two goals each in the title-clincher.

“It’s a lot to take in right now,” Antonuccio said. “We’re looking forward to states, that’s our focus right now. As seniors, we’ve played since we’re in U8, so we have a strong bond. I feel like this team is going to keep growing.”

The unbeaten Rovers lived up to their top-seeded billing, flexing their muscles on offense and defense in a win that was special for head coach Andy Daughterty as well.

“This absolutely never gets old, there’s no doubt about that,” Daugherty said. “This group, these seniors have been together since they’re eight years old. Just to cap it off with five in a row for our school and four in a row for these guys is definitely special.”

Brockway is your Class 1A boys champion, 8-0 over Elk County Catholic pic.twitter.com/p2csl5pU8m

The seventh-seeded Crusaders knocked off Clarion-Limestone (4-2) and Coudersport (1-0) to get to this point, but Brockway was just too much.

A corner kick led to Swanson’s first goal of the game 13:13 into the contest, and the Rovers were off and running.

The Rovers continued to dominate possession throughout the first half, and got their second goal after Antonuccio gathered the ball in the box and was able to beat ECC keeper Ryan Jovenitti to make it 2-0.

That score held for exactly one minute, which is when Noah Adams scored to make it 3-0.

It happened in the blink of an eye, which is something Brockway has done often this season.

“I definitely feel like these guys were loose all week leading up to the game,” Daugherty said of his team. “Same spotlight, they’ve been in it before and I don’t think it affects them.”

The Rovers, who beat Kane 4-0 in the semifinals, poured it on in the second half.

First, it was Antonucci with his second of the game, playing a long ball from defender Joe Hertle.

At the 18:32 mark it was Marchiori burying a penalty kick, the first of three goals in a six-minute span for the Rovers.

Just over a minute after Marchiori’s PK, Swanson put the finishing touches on his night, scoring on a feed from Evan Botwright to make it 6-0.

Goals seven and eight came courtesy of the sophomore Bash, as the celebration was well underway for Brockway.

Keeper Jacob Maze had a relatively quiet night in net, as the defense, led by Hertle, Eric Young, Mason Freemer and Alex Carlson were once again stellar.

It’s a Brockway program that made it to the PIAA semifinals last season before dropping a heartbreaker, 2-1 to Greensburg Central Catholic. They feel like they have the team to make another deep run in states.

“That’s what the goal is,” Daughtery said. “We’ll try and go through that WPIAL gauntlet.”

That state playoff run will begin on Nov. 9 against the No. 3 seed from the WPIAL, either Eden Christian or Riverside (that game will be played on Thursday).

Despite the loss, Elk County Catholic’s season isn’t finished yet, either.

The Crusaders will draw the loser of the District 5 title game between McConnellsburg and Everett (that game is Thursday) on Saturday at 1 p.m. at Windber.

Clarion’s Serving Plan Comes Together in D9 VB Semifinal Win Over Rival C-L
VB Final Sports Claimed: Oswayo Valley Volleyball Makes School History; Redbank, Keystone Advance in D9 2A ; W. Middlesex, Cochranton in D10 1A
We use cookies on our website to give you the most relevant experience by remembering your preferences and repeat visits. By clicking “Accept All”, you consent to the use of ALL the cookies. However, you may visit "Cookie Settings" to provide a controlled consent.
Cookie SettingsAccept All
Manage consent