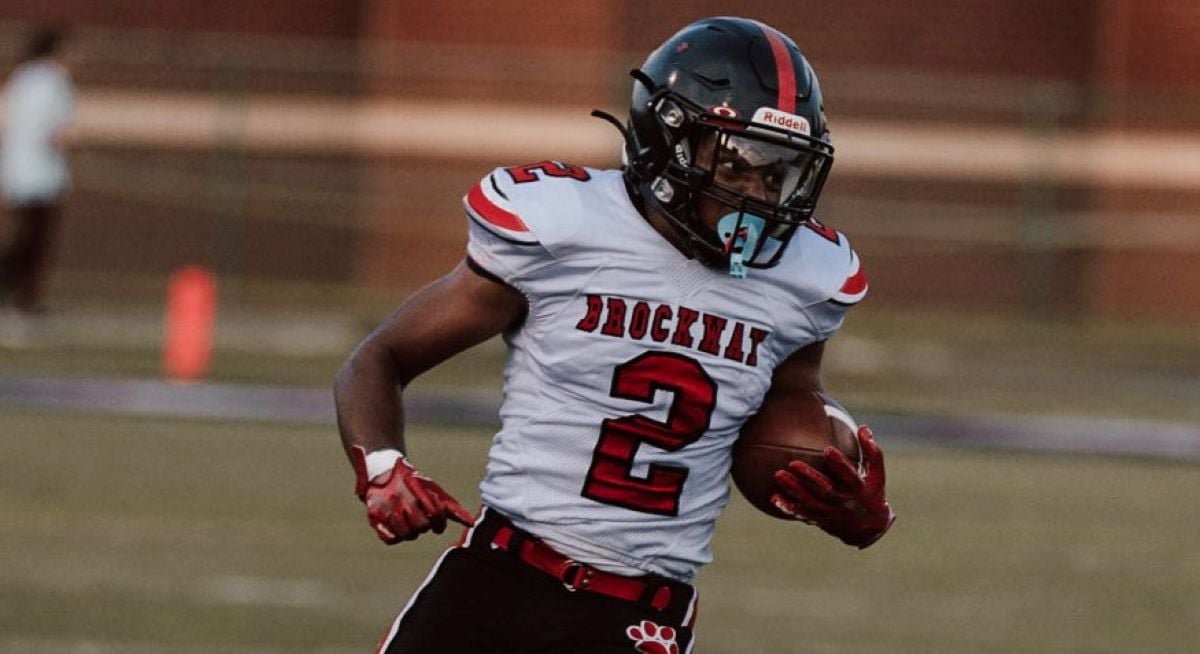 Jendy Cuello and Brockway are headed to the D9 1A title game. Photo by Anna Mattivi

DuBOIS, Pa. – The second crack at the two-time defending champions was definitely a charm for the Brockway Rovers, who rode a couple big pass completions, but mostly the power running of Jendy Cuello in a 7-3 D9 Class 1A semifinal win over Redbank Valley at E.J. Mansell Stadium Saturday afternoon.

The Rovers (8-3) now advance to next week’s final against Port Allegany, which beat Keystone 18-6 in Bradford also Saturday afternoon.

The teams tangled for a 34-28 shootout won by the Bulldogs in New Bethlehem on Oct. 21, but the rematch really had just one common thread — Jendy Cuello.

The Rovers’ junior running back, who ran for 182 yards on 33 carries in the first meeting, went for 166 yards on a whopping 41 carries this time. Neither game he found the end zone, but he certainly factored in working off his offensive line’s work in controlling the tempo and line of scrimmage most of the game.

The lone score of the game came on one of just two pass completions by 2,400-yard junior quarterback Brayden Fox in the game, both going to Mattie Brubaker.

Fox hooked up with a wide-open Brubaker down the Bulldogs sideline for a 45-yard touchdown pass with 9:20 left in the second quarter. Earlier in the drive, Fox tossed a 23-yard pass to Brubaker when he was lined up to punt on a fourth-and-nine from the Rovers’ own 9. Six plays later, five of them runs by Cuello, the two connected for the touchdown.

That was it for the Rovers on the scoreboard. They drove to the Bulldogs’ 1 on the opening drive of the game, but the Bulldogs stuffed Cuello on the 14th play of the drive on fourth down.

The Bulldogs threatened to score at the end of the first half, but the Rovers forced an incomplete pass on fourth-and-3 from the Rovers’ 7 with 49.1 seconds left before halftime.

Redbank Valley had a couple of chances to score on deep passes that were dropped or intercepted, including a would-be 51-yard TD pass from Braylon Wagner to Tate Minich late in the third quarter. The Bulldogs finally did score on the first play of the fourth quarter when the Bulldogs elected to have Owen Clouse kick a 22-yard field goal on fourth-and-three from the Rovers’ 5.

The decision to go for three points did work as the Bulldogs were able to get the ball back down four points late in the game, but not before the Rovers ran nearly seven minutes off the clock.

Wagner’s 40-yard pass to Rylan Rupp on third-and-10 put the Bulldogs at the Rovers’ 40 with under four minutes left, but three plays later, Wagner’s deep pass to Minich toward the end zone hung in the air just enough for the Rovers’ Alex Carlson to intercept at the Rovers’ 1 with 3:01 remaining.

From there, the Rovers were able to run out the clock with Cuello’s 33-yard run nailing the win down to get the Rovers back to a D9 final for the first time since the 2018 Class 2A final when they lost 14-7 to Ridgway.

The Rovers outgained the Bulldogs, 239-195. Wagner completed 11 of 22 passes for 111 yards with two interceptions. Drew Byers rushed for 55 yards on 22 carries.

Eisenhower Rallies For Berth In D10 1A Title Game; Will Face Reynolds; Farrell, Sharpsville Advance in 2A; Meadville Rolls
Central Clarion Secures First D9 Title in Program’s Fourth Year by Beating Brookville in 2A
This website or its third-party tools process personal data.In case of sale of your personal information, you may opt out by using the link Do not sell my personal information.
×
Manage consent