Eisenhower Rallies For Berth In D10 1A Title Game; Will Face Reynolds; Farrell, Sharpsville Advance in 2A; Meadville Rolls 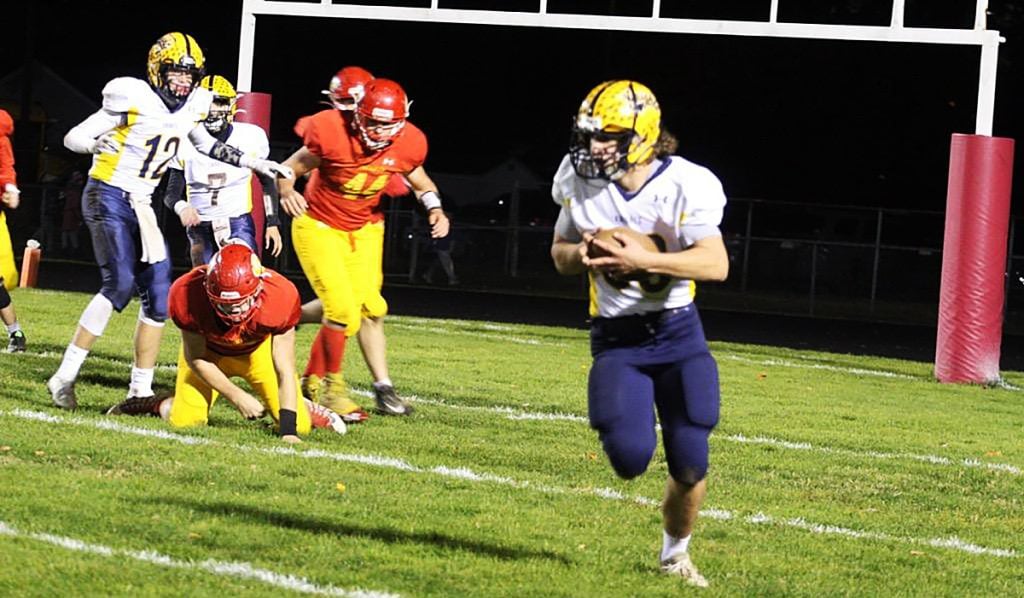 WARREN, Pa. – Cambridge Springs led for nearly all of Saturday’s District 10 Class 1A semifinal against Eisenhower, but the Knights came up with an answer when it mattered the most.

And with Cambridge Springs (8-4) driving at the Eisenhower 41 on the ensuing possession, Garrett Jensen intercepted Blue Devils’ quarterback Morgan Applebee with just over a minute remaining, and the Knights were able to run out the clock, setting up a date with Reynolds for the D10 title.

“It was blocked great,” Bauer, who finished with 209 yards in the game, said of his go-ahead touchdown run. “I saw one or two guys out there and I knew I couldn’t get run down.”

“Jensen, you’ve got a smart kid who’s all about the team he does his job sits back like he’s supposed to, sees it coming, and makes a huge play,” Penley said.

Kris Bunk was one of a number of Eisenhower players who stepped up on defense in the second half to send the Knights to the goal they have been building toward all season – playing for a D10 title.

“Coach told us at halftime just to play our game and we did and we were able to come out with the W,” Bunk said.

It was a game in which Eisenhower twice got within one in the second half, with Cambridge Springs stopping them on 2-point conversion attempts both times.

“I mean, I’d like to believe that my teams have always been like this,” said Penley. “All those years playing against Mercer County teams and getting beat, just getting to a point where you have an expectation that these guys are in any game and there’s no game that’s too far out of control.”

Cambridge Springs led 14-7 at the half on the strength of a pair of Morgan Applebee touchdowns, one rushing and the other a 17-yard touchdown strike to Preston Gorton with 1:18 to go in the half.

Kaiden Boozer intercepted Shawn Pascuzzi on the Knights’ opening drive, but Eisenhower’s defense stood tall until Tucker Lindell’s 12-yard touchdown run with 1:49 left in the quarter made it 14-13.

Lindell talked about the win afterward:

The Knights went for 2, and got it, but it was called back due to penalty and they failed on the ensuing attempt.

Cambridge Springs answered right back, with Applebee hooking up with Gorton on a 54-yard scoring strike with 9:59 to go in regulation.

Again, the Knights had the answer, as Bauer’s 10-yard touchdown run with 5:50 to play made it 20-19 after Cambridge Springs again stuffed the Knights’ 2-point conversion attempt.

“Well, you know, I think a lot has to be said for this group because when everyone knows you’re gonna do it and you still do it, and when you can do it and pick up big chunks of yardage when everyone else needs to pass, I think it’s pretty special,” Penley said of his team’s ability to run the ball. “Benji, Tucker, running and blocking tonight, Pascuzzi running simple quarterback sneaks and picking up big chunks yards, blocking from the receivers downfield … you know these guys know what it’s about. It’s about making plays and winning a game.”

Cambridge Springs made a statement on the opening drive that they were ready to play, driving the ball right down the field, all on the ground, capped off by Applebee’s scoring plunge.

Eisenhower got on the board with 10:02 to go in the second quarter on Lindell’s first touchdown of the game, a 1-yard plunge.

Connor Younger, an anchor on the Knights’ offensive line, talked about the win afterward:

Pascuzzi finished with 98 yards on the ground and Lindell 37 for Eisenhower.

Applebee finished 8-of-12 with 111 yards for the Blue Devils, 76 of which went to Preston Gorton. Jones had 54 yards on the ground.

The win for Eisenhower sets up a showdown with Reynolds.

“Number one, the goal is the district title game,” Penley said. “For us, that’s always been the goal. To be able to play high-quality football in Western Pennsylvania and go play a program like Reynolds, coach (Josh) Mull, all those players down there, man, that’s what it’s all about. That’s why you do this.”

FARRELL, Pa. – Haydin McLaughlin and Jalen Wagner accounted for three touchdowns each as Reynolds raced past Maplewood and into the D10 Class 1A title game with a 44-6 win over Maplewood.

Reynolds jumped out to a 30-6 lead at halftime on the strength of 58-yard touchdown runs by McLaughlin and Wagner in the first quarter, with the duo doing more damage in the second quarter.

McLaughlin scored on an 8-yard run and a 34-yard touchdown pass from Brayden McCloskey, sandwiched in between a 45-yard touchdown run from Maplewood’s Ben Gilberto.

Wagner scored on runs of 12 and 13 yards in the second half.

Wagner finished with 175 yards on the ground and McLaughlin 46, while also being on the receiving end of 76 of McCloskey’s 140 yards.

Gilberto finished off his brilliant season with another big game with 238 yards.

The win for Reynolds sets up a showdown with Eisenhower for the D10 title next week.

Juju Phillips returned the opening kickoff for a touchdown for the Steelers (9-1), who built a 34-0 halftime lead en route to the win.

Wilson scored three of his four touchdowns in the first half on a 2-yard run and passes of 16 and 20 yards from Smith.

Brandon Chambers also scored a pair of touchdowns, one on a 17-yard pass from Smith and the other on a 13-yard run.

Wilson’s 30-yard touchdown reception from Smith put a cap on the Farrell scoring.

Nolan Seabury threw a late touchdown pass to Collin Libra for Seneca, which was coming off its first playoff win in program history.

Chambers finished with 87 yards on the ground, while Smith had 155 through the air, 102 of which went to Wilson.

Farrell advances to play Sharpsville for the Class 2A title next week.

FARRELL, Pa. – Caullin Summers had a pair of touchdown runs in the fourth quarter to rally Sharpsville from a 15-7 deficit for a 21-14 win over Mercyhurst Prep.

With the win, Sharpsville advances to play Farrell for the D10 title.

Summers then scored the go-ahead touchdown on a 25-yard yard scamper with 2:07 to play, his third of the game after he opened the scoring with a 4-yard run in the first quarter.

The second and third quarters belonged to Mercyhurst Prep, as Paul Johnson intercepted Summers and took it 80 yards to the house to tie the game early in the second quarter.

That score held until the midway point of the third quarter when David Bahm connected with Stephen Grayson on a 39-yard touchdown to give Sharpsville the lead.

Summers finished with 70 yards rushing and 95 yards passing, with Garen Levis and Kalvin McCullough each having interceptions for the Blue Devils.

Bahm had 94 yards passing for the Lakers, while Jeremy Ganska had 55 yards rushing.

The Bulldogs outscored UP 28-6 in the second half after leading 12-6 at halftime.

Simmons and Walker both had touchdown runs in the first half and went to work big time in the second half.

It was still just 18-12 after the third quarter after another Walker touchdown run, but Simmons’ second touchdown, coupled with a Nic Williams interception return for a touchdown made it 34-12 with five minutes to play.

Walker put the finishing touches on his day with his third touchdown with just over two minutes remaining.

Walker finished with 202 yards on the ground and Simmons 200.

Archer, Gators Run Past Keystone, Into D9 1A Title Game
There will be a New Champion in D9 1A Football as Brockway Tops 2-time Defending Champ Redbank in Semifinals
This website or its third-party tools process personal data.In case of sale of your personal information, you may opt out by using the link Do not sell my personal information.
×
Manage consent