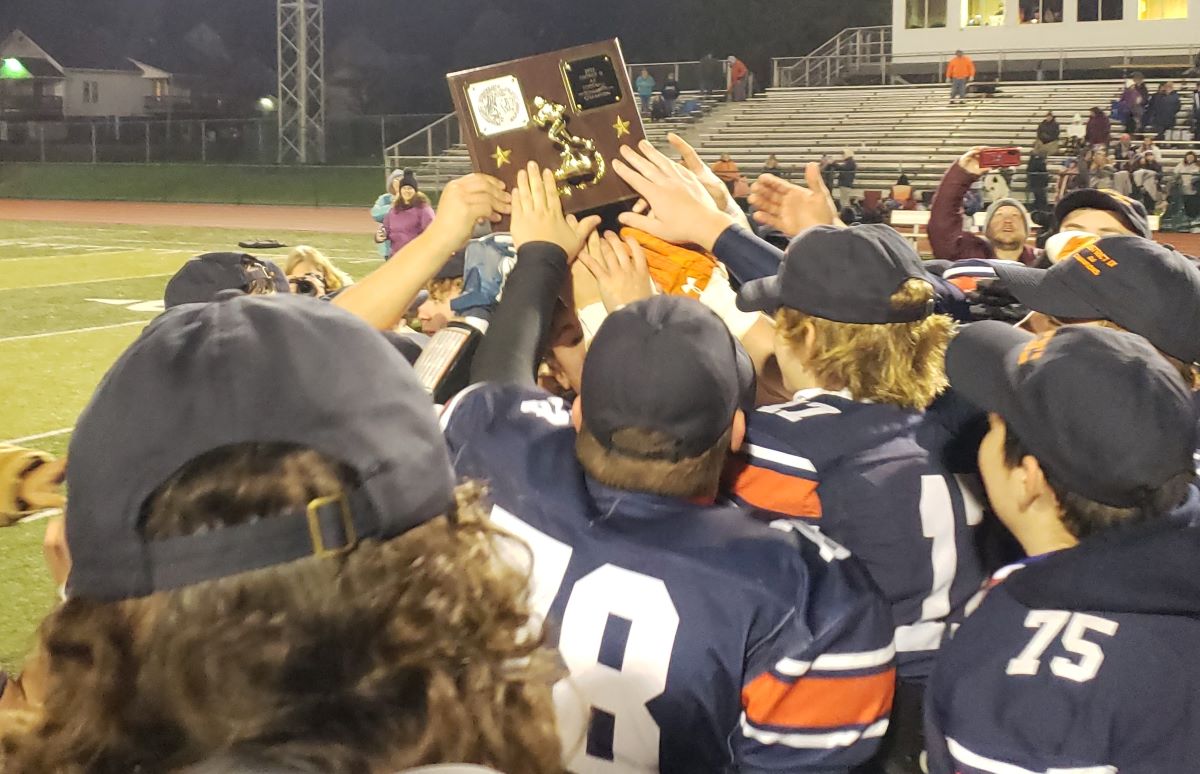 KARNS CITY, Pa. – When the Clarion and Clarion-Limestone football programs were merged to form one team, a team that eventually became known as the Central Clarion Wildcats, in 2019 there was immediate discussion on how the two traditional powerhouses would, could, win District 9 titles.

It took four years for that discussion to become reality, but the Wildcats can finally call themselves champions are dousing upstart Brookville, 35-0, in the D9 Class 2A title game at Karns City’s Diehl Stadium Saturday night.

“It is fantastic,” second-year head coach Davey Eggleton, who was the head coach at C-L from 2013-19, said. “Probably, without a doubt, the greatest feeling in my coaching career. I am just so happy for the guys. They have worked so hard to come from where we were last year (CC went 4-6 in 2021) with a still relatively young team. I told them before the game they took it upon themselves this offseason to make sure what happened last year didn’t happen this year. We weren’t happy with the results a year ago, and they just worked so hard all offseason. They worked so hard at camp, in two-a-days. It just paid off here.”

Watch Eggleton get the water bath as the clock ticks down

The Wildcats used explosive plays to open up a 21-0 halftime lead and then relied on its offensive and defensive lines in the second half to keep the lead.

After Central Clarion forced a three-and-out on Brookville’s opening drive, Dawson Smail, who was snubbed in the all-Region voting earlier in the week, returned a Bryce Weaver punt to the Brookville 25-yard line.

Two plays later, after a blindside block on Clarion’s first offensive play moved the ball back to the 37, Jase Ferguson hit Tommy Smith down the far sideline for a 32-yard gain to the Brookville 5-yard line.

“Obviously, they were giving a lot of attention to Ashton (Rex),” Eggleton said about his 1,000-yard receiver. “Tommy Smith made a great catch down the sideline. It was a great pass and a great catch.”

On the next play, Connor Kopnitsky galloped in from five yards out to put the Wildcats up 7-0 1:40 into the game.

On Central Clarion’s next possession, it was a big pass play that made it 14-0.

After the Wildcats turned the Raiders away on downs at the Central Clarion 19-yard line, it took just four plays for the game to become a two-score affair.

Again it was Smith making the big play, as he beat Noah Peterson deep down the near sideline for a 57-yard touchdown pass from Ferguson with 4:04 to play in the first quarter.

After the Smith touchdown, the game stalled with field position being flipped to Brookville but the Raiders able to do nothing despite drives starting at its own 48 and Central Clarion’s 46.

Both of those drives resulted in punts, part of a sequence of five straight punts by the teams combined.

The Wildcats, meanwhile, kept finding themselves backed up against the wall with an average starting position on their three drives following the Smith TD being their own 14-yard line.

The first of those two drives resulted in punts, but the third one saw Central Clarion again use an explosive play to go 92 yards in four plays.

The big play was a 76-yard pass and catch to Rex, who took a short pass over the middle, broke into the clear, and used his elite speed to outrace the Brookville defenders to the end zone.

“Every time I catch the ball, I am looking for an opening,” Rex said. “Any opening I can find, I break through it.”

With the Wildcats up 21 at halftime, any thoughts of a Brookville comeback were erased on the opening drive of the second half when Central Clarion took the second-half kickoff and marched 63 yards on 12 plays taking 6:51 off the clock.

The drive ended with a 1-yard Ryan Hummell touchdown run that all but put the game out of reach.

“I thought our offensive line just took over,” Eggleton said. “We just pounded the football. All of our backs ran hard. When we did throw it, Jase made great decisions. It was just a fantastic job by the whole team. It was a great whole-team effort.”

Central Clarion’s defense did the rest of the heavy lifting not allowing Brookville a second-half first down while limiting the Raiders to just 21 second-half yards.

“We didn’t do anything different,” Eggleton said. “We just did a good job reading our keys. We didn’t sell out to the run. We played our four-man front just like we did all season. Our big guys up front ate up blocks, and our inside backers – Ryan Hummell and Braylon Beckwith – played fantastically. They just made everything bounce out and we strung them out when they tried to run up inside. We just did a fantastic job coming up and making tackles.”

Kopnitsky’s second TD of the game, this one a 3-yard run with 9:33 to play, but the PIAA Mercy Rule into action leaving the Wildcats time to enjoy their championship on the sideline.

“It feels amazing,” Rex, who finished the night with two catches for 103 yards and a touchdown, his ninth 100-yard receiving game of the season, said. “It is good to be here. I think a lot of our team put a lot of effort into this. It is a great feeling.”

“They just played hard-nosed defense,” Park said. “They were beating us to the punch it seemed like. (No.) 11 (Hummell) gave us fits at the linebacker position all night. It is hard to explain. I thought we would be able to run the ball. We liked our line against their line and stuff. We thought we would be able to do that, and there were some cases where we did do that. But it seemed like we would get ourselves in good position and we shot ourselves in the foot.”

Jackson Zimmerman had a strong first half for the Raiders rushing for 71 yards on 15 carries in the opening half, but, like the rest of his teammates, had trouble getting going in the second half finishing with 89 yards on 22 carries.

Ferguson and Kopnitsky each ran for 70 yards on 14 carries for Central Clarion with Ferguson also going 4 of 12 passing for 192 yards. Smith added two catches for 89 yards.

Central Clarion will face City League champion Westinghouse in the PIAA playoffs next week. That game, if the bracket holds the way it should, would be at Cupples Stadium in Pittsburgh, although an official site won’t be known until Sunday.

There will be a New Champion in D9 1A Football as Brockway Tops 2-time Defending Champ Redbank in Semifinals
District 10 Football Brackets Updated for 1A, 2A, 3A Championships, 4A, 6A Subregionals
This website or its third-party tools process personal data.In case of sale of your personal information, you may opt out by using the link Do not sell my personal information.
×
Manage consent