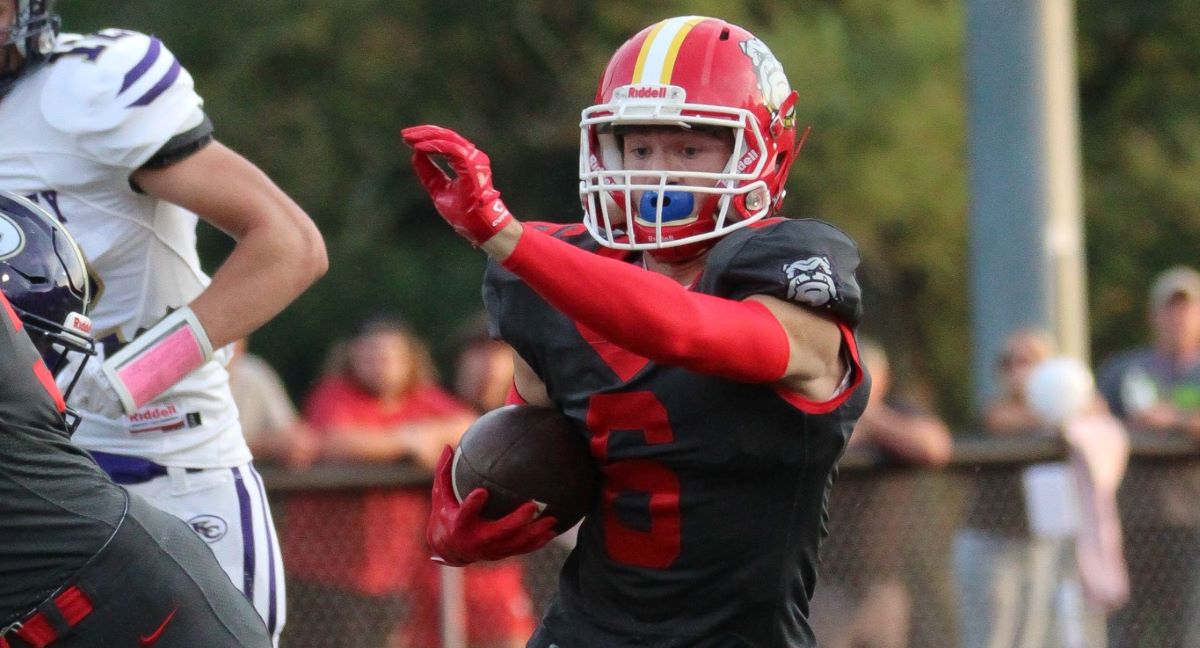 PUNXSUTAWNEY, Pa. – Two long punt returns by Redbank Valley – one for a touchdown and one to the 2-yard line – helped the Bulldogs knock off Punxsutawney, 28-14, in a battle of early-season unbeatens at Punxsutawney.

Then, with Redbank Valley up 21-14 early in the fourth quarter, Ashton Kahle caught a punt at his own 47-yard line and returned it to the Punxsutawney 2-yard line. There was some question as to whether Kahle should have been allowed to return the ball considering Clouse seemed like he was calling for a fair catch just before Kahle caught the ball, and according to the NFHS rule book “No receiver may advance the ball after a valid or invalid fair-catch signal has been given by any R (Receiving team) player:”

“Special teams is something that is important to me,” Redbank Valley head coach Blane Gold said. “We put a lot of emphasis on special teams. We spend a lot of time stressing that. We feel like we have four guys who can take it to the house from any given point.”

After the Minich touchdown, his second of the game, Punxsutawney had one chance to get back within a score driving the ball to the Redbank Valley 4-yard line.

But Zeke Bennett fumbled the ball on the first-down carry with quarterback Seth Moore recovering back at the 9-yard line.

On second down, Bennett ran to the 4-yard line with just under 5 ½ minutes to play.

But a bad snap to Moore, who was in the shotgun, forced the QB to fall on the ball at the 9-yard setting up a fourth-and-goal.

“Execution is the next step,” Punxsutawney Alan Nichol said. “Working hard in the weight room and being a physical team, that’s step one. The next step is to execute and don’t make mistakes. We had quite a few mistakes, mental mistakes. That’s all part of the process. If you want to be champions, you have to learn to execute when the pressure is on.”

Moore’s pass into the end zone on fourth down was then broken up by Kahle, at least one of three pass breakups for the junior, who was named the Allegheny Grille of Foxburg Player of the Game.

Kahle talked about the win and his game.

Redbank Valley led 14-0 in the game after Aiden Ortz caught a 50-yard touchdown pass from Wagner just under a 1 ½ minutes into the second quarter.

Punxsutawney, though, got its ground game going and went on a long drive that ended on a 3-yard Bennett touchdown run with 3:47 to play in the half.

While the Chucks were running the ball, Redbank Valley couldn’t get anything going in the planned running game.

The Bulldogs rushed for 76 yards on the night, including just two from Drew Byers. Wagner was the leading rusher with 84 yards, mostly on scrambles, on eight carries.

“We opened up big holes,” Nichol said. “And I don’t think they ran the ball up the middle very much. Our guys up front and our linebackers did a good job stopping the run. We made them one-dimensional, but they made enough plays that they were able to put up 28 points.”

Up seven at the break, Redbank Valley put together a strong drive through the air to start the second half scoring on a 22-yard pass from Wagner to Minich with 9:24 to go in the third quarter.

Punxsutawney was able to answer back later in the quarter when a 15-yard running into the returner on a punt that put the Chucks at the Redbank Valley 35-yard line.

The drive ended with an 11-yard Justin Miller touchdown run with 4:25 to go in the third quarter making the score 21-14.

Wagner was 21 of 27 for 244 yards, three touchdowns and two interceptions.

Minich had six catches for 79 yards and two scores with Kahle catching six for 59 yards and Ortz five for 86 and the score.

Bennett ran 29 times for 153 yards for Punxsutawney with Landon Martz adding 12 for 47 and Miller nine for 26.

Week 3 D10 Recaps: Oil City’s Knox Continues Rushing Assault; Cochranton Wins in OT
Week 3 D9 Recap: Keystone Rally Past Brookville; Clearfield King of the Mountain; Moniteau, KC Get First Wins
This website or its third-party tools process personal data.In case of sale of your personal information, you may opt out by using the link Do not sell my personal information.
×
Manage consent