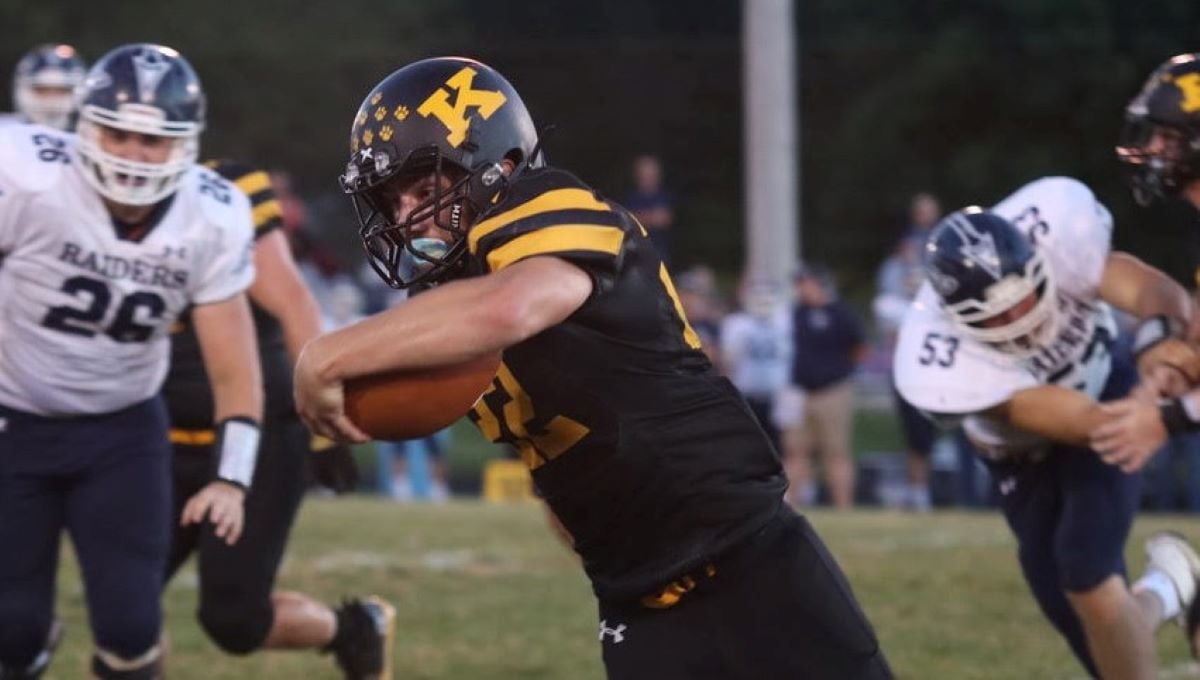 KNOX, Pa. – Kyle Nellis’ 21-yard touchdown run and Drew Keth’s two-point pass to Spencer Heeter off a fake extra-point play with 6:15 left in the game lifted Keystone to a come-from-behind 20-19 win over Brookville.

Nellis ran for 108 yards on 14 carries and threw a 52-yard option pass for a touchdown to Drew Slaugenhaupt to lead the Panthers, who improved to 3-0.

Rayce Weaver completed 5 of 11 passes for 134 yards, including a 49-yard TD pass to Tyler Albright, who caught four passes for 121 yards.

The Raiders (0-3) jumped out to a 13-0 lead in the first quarter as Easton Belfiore threw two of his three TD passes to Brayden Kunselman and Noah Peterson covering 20 and 19 yards. Weaver’s TD pass to Albright and Nellis’ scoring strike to Slaugenhaupt cut the score to 13-12 before Belfiore’s 34-yard TD pass to Kunselman made it 19-12 with 1:09 left in the game.

That turned out to be all the points scored for the Raiders, who were limited to 41 yards in the second half by the Panthers.

However, the Raiders threatened late in the game, getting to the Panthers’ 20 with under two minutes remaining. On a third-and-five play from the Keystone 15, the Panthers sacked Belfiore. After the play, the game clock ran at least 20 seconds when this year’s new rule should’ve given the Raiders the option to stop the clock because of a defensive penalty called on a 5-yard facemask flag.

Instead, the Panthers sacked for Belfiore for a 9-yard loss to force fourth down at the Panthers’ 29 with seven seconds put back on the clock after it was allowed to run out despite Brookville trying to call timeout. On the final play of the game, Keth intercepted Belfiore at the goal-line to seal the win.

Belfiore completed 10 of 20 passes for 138 yards with his three TDs in his first varsity start with Kunselman catching seven passes for 100 yards and two scores. Jackson Zimmerman ran for 89 yards on 24 carries.

HYDE, Pa. – Brady Collins and the Clearfield rushing attack made sure the Bison remained King of the Mountain with a 41-7 win over visiting and previously unbeaten DuBois.

Collins ran 16 times for 158 yards and three touchdowns as Clearfield (2-1) scored more points in the second half (27) than it had in its first two games (14). Collins also returned an interception for a touchdown.

Collins talked about the victory

Jacob Samsel and Will Domico each added rushing touchdowns in the victory with Samsel rushing three times for 62 yards and Domico 10 for 33.

Nathan Kougher had the lone touchdown for DuBois, which trailed by just 7, 14-7, at halftime, on a 90-yard kickoff return following Clearfield’s first touchdown.

EMPORIUM, Pa. – Logan Campbell scored three rushing touchdowns to lift Moniteau to its first win of the year thanks to a 20-12 victory at winless Cameron County.

Campbell ran 13 times for 57 yards scoring on carries for 33, 3, and 6 yards to help the Warriors (1-2) to a 20-6 lead at the end of three quarters. Campbell added three catches for 63 yards and also made six tackles on defense.

Colton Thomas had a big game on defense for Moniteau with nine tackles, an interception, and a fumble recovery. David Martino also had eight tackles, including two for a loss.

Maddox Baughman was 11 of 24 passing for 152 yards, a touchdown, and an interception for Cameron County (0-3). Brevin Lewis caught the touchdown pass and had two catches for 15 yards, while Koby Sheppard had five catches for 97 yards.

Jameson Britton added a rushing touchdown for the Red Raiders and finished with six carries for 30 yards. Latham Reed led Cameron County with 12 carries for 47 yards.

KANE, Pa. – Charlie Coudriet threw for three touchdowns and had over 240 yards of total offense, as visiting St. Marys rolled past Kane, 30-0.

Coudriet was 11 of 20 passing for 126 yards and three touchdowns. He also threw an interception but also ran nine times for 119 yards.

Alex Lukaschunis had a big night for the Dutch (3-0) as well. He had seven tackles with three TFLs and two sacks. He also had a blocked punt and had two punts downed inside the 3-yard line.

KARNS CITY, Pa. – Nathan Hess ran for a pair of touchdowns, as Karns City got its first win of the season, 28-0, over winless Ridgway in Karns City.

Hess scored on a first-quarter run of 10 yards and on a 1-yard run in the third quarter.

Cooper Coyle started the scoring for the Gremlins (1-2) with a 15-yard run, and Eric Booher had a 26-yard touchdown carry.

Coyle had a game-high 71 yards rushing on seven carries with Braden Slater adding 60 on five totes.

Magee had t three catches for 47 yards with both touchdowns coming from Andrew Schenfield.

Schenfield was 12 of 25 passing for 154 yards, two touchdowns and two interceptions for the Terrors (2-1).

Troy Adkins scored three touchdowns for Bradford (0-3), who has lost 21 in a row. Adkins caught six passes for 126 yards and a touchdown and ran for 28 yards and two scores.

Talon Reese was 20 of 39 passing for 283 yards and two scores. Isaiah Fitton caught seven passes for 107 yards and a touchdown while also intercepting a pass.

COUDERSPORT, Pa. – Brockway took its high-flying offense on the road to Coudersport and put up a 70 spot in a 70-16 win.

Alex Carlson hauled in 12 catches for 197 yards and three touchdowns with Dylan Hanna catching three passes for 99 yards and two touchdowns and Isaac Crawford two balls for 70 yards and a touchdown. Carlson also had an interception on defense.

Backup QB Andrew Brubaker also got in on the action going 7 of 9 passing for 102 yards and six scores, and Jendy Cuello ran 15 times for 100 yards and two scores.

Brockway outgained Coudersport 630 yards to 109 including 455 to 16 through the air.

Owen Deutschlander ran five times for 77 yards and a touchdown for the Falcons (1-2), who actually led 8-0 when Jackson Moss returned the opening kickoff 78 yards for a touchdown.

Ridgway ran 15 times for 202 yards and three scores and was 6 of 10 passing for 102 yards, a touchdown, and an interception.

Ben McGarry threw for a touchdown and ran for a score for the Golden Tide (2-1). He was 22 of 36 passing for 195 yards with an interception and ran 11 times for 25 yards. The touchdown pass went to Hunter Tkacik, who had two catches for 13 yards. Nick Fegert caught eight passes for 85 yards.

CLARION, Pa. – Connor Kopnitsky ran for three touchdowns in the first half, as Central Clarion rolled to a 43-6 win over visiting Union/A-C Valley at Clarion University’s Memorial Stadium,

Kopnitsky scored on runs of 50, 4, and 1 yard while rushing nine times for 84 yards.

Altogether, the unbeaten Wildcats (3-0) ran for five touchdowns with Jase Ferguson (8 carries, 37 yards) and Brady Quinn (6 carries for 32 yards) scoring on short runs. Ferguson also threw a 21-yard touchdown pass to Dawson Smail and was 10 of 16 passing for 169 yards with an interception. Ferguson also picked off a pair of passes on defense.

Union/A-C Valley broke up the shutout with a 25-yard Owen Bish scoring run midway through the fourth quarter.

Dawson Camper ran nine times for 58 yards to lead the Falcon Knights (1-2) with Brody Dittman going 5 of 15 passing for 62 yards and two interceptions. Dittman did have an interception on defense.

Brody Pentz ran for a pair of touchdowns for Bucktail (1-1) and carried the ball 10 times for 83 yards. Tanner Pettingill ran 20 times for 134 yards for the Bucks.

Special Teams Help Redbank Valley Beat Punxsutawney
Pizza Hut District 9 and District 10 Football Live Scoreboard – Week 3 2022 (Sept. 9-10)
This website or its third-party tools process personal data.In case of sale of your personal information, you may opt out by using the link Do not sell my personal information.
×
Manage consent