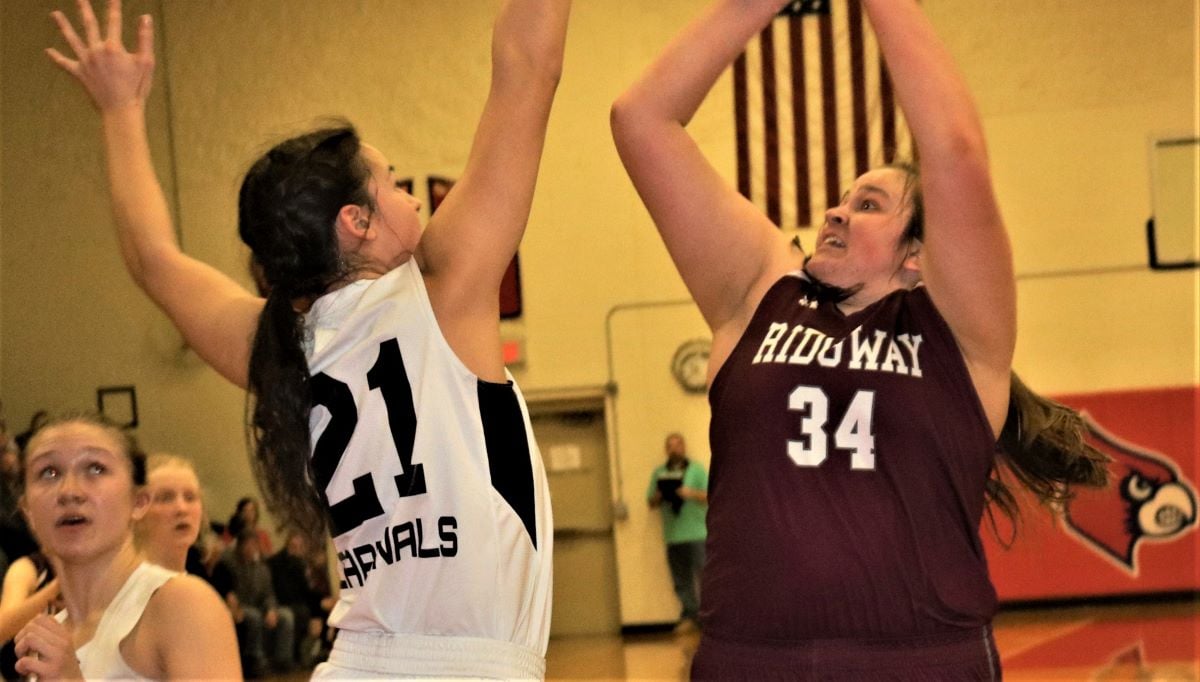 Jenna Kasmierski of Ridgway (in maroon) shoots over DCC's Faith Jacob during the Lady Elkers D9 1A quarterfinal win Thursday. Photo by Bob Parana of the Ridgway Record

DUBOIS, Pa. – A 9-2 run to close out the third quarter and a huge offensive rebound and two free throws by Carli Thomas sent Ridgway to the PIAA playoffs for the first time since 1989 thanks to a 45-40 win at DuBois Central Catholic in the District 9 Class 1A quarterfinals.

“To go (to the state playoffs) really means something to the girls,” first-year head coach Jason Schriber said. “They set this as a goal back in the beginning when I was hired and they did what they had to do to get the goal. Hopefully, we are not done. We have some other goals, but this definitely was a big one.”

A 3-pointer by Payton Delhunty then gave Ridgwy a 26-21 lead early in the second half before DCC went on a 7-0 run to take its only lead of the game, 28-26, on an offensive putback by Faith Jacob with 4:27 left in the third quarter.

That’s when the Lady Elkers responded with the 9-2 spurt that started when Thomas tied the game with an offensive putback followed by a sequence that saw Jenna Kasmierski score after her teammates grabbed three straight offensive boards with just over three minutes left to put Ridgway back in front, 30-28.

After Emma Elenski tied the game at 30 – the last time the contest was tied – an old-school 3-point play by Thomas with 1:38 left in the third put Ridgway ahead for good, 33-30.

Delhunty then pushed the lead to five, 35-30, at the end of the third quarter.

“It was big to have that run and get the lead back,” Schriber said.

The lead grew to six, 39-33, following a pair of Kasmierski baskets in the first 1:27 of the fourth quarter, but then DCC put the press on and forced five straight Ridgway turnovers.

Unfortunately for the Lady Cardinals all those turnovers only turned into three made free throws that got them back within three, 39-36, with 2:50 to play.

Thomas, however, got open underneath with just under a minute left to make it 41-38 Ridgway.

The Lady Cardinals then got a stop, but Marina Hanes’ jumper from just inside the arc at the top of the key was off the mark, and Kasmierski got the rebound with 21.4 seconds left.

Kasmierski, however, missed the free throw, and that’s when Thomas got the huge offensive board and was fouled with 19.6 left.

Thomas his both free throws to push the lead back to three, 43-40.

“That was huge,” Shriber said. “Not only did she get the rebounds, she knocked down both foul shots. Kaz is usually an excellent foul shooter so, to get the ball back helped widen the lead out. It definitely helped things in the long run.”

Lexi Berta then hurried a 3-pointer for DCC that was off the mark, and this time Kasmierski hit both of her foul shots to send Ridgway into the District 9 semifinals against Elk County Catholic.

“We have been in quite a few tight games,” Schriber said. “We are definitely used to being in those types of games. We have been really playing well the last three or four weeks.”

What Ridgway hadn’t had to deal with his finding someone to step up.

But the Lady Elkers were forced into that situation early in the second quarter when Julie Peterson hurt an ankle and wasn’t able to return.

Schriber, though, praised the play of Kristin Ellenberger, Emma Vargas, and Kaitlyn Amacher.

“We have not used a whole lot of players in varsity this year,” Schriber said. “Usually, we have used two off the bench all year long. But we’ve been telling everyone to make sure they are ready, to pay attention in practice. Kristin Ellenberger stepped in tonight and you wouldn’t know she hadn’t played much. She played good defense and handled the ball well. Emma Vargas got her first meaningful varsity minutes late in the game when Payton fouled out, and Kaitlyn Amacher went in and was comfortable doing what we needed her to do. It just goes to show everyone was ready and stepped in and did their part. It says something about the team.”

Hanes led DCC with 12 points, including 10 in the second quarter when she hit a pair of 3-pointers. Lexi Berta added nine points, all on threes including two in the first quarter, and Kayley Risser also had nine points.

Ridgway will face ECC in the semifinals Tuesday, March 1, at a site and time to be announced.

With five teams qualifying for the PIAA Tournament, the Lady Elkers are state-playoff bound for the first time since winning the 1989 District 9 Class 2A championship.

DCC’s season isn’t over. The Lady Cardinals move into the District 9 fifth-place consolation tournament where it will play Northern Potter in the opening round of a two-round consolation bracket.

Editor’s note: D9and10Sports.com covered this game remotely via DCC’s video feed of the contest. The Schriber interview was conducted over the phone

The second-seeded She-Wolves got behind 7-2 early according to head coach Terry Dreihaup and led by just one, 17-16, at halftime.

“I thought we kept them in the game,” Dreihaup said. “(Clarion) played tough. They probably played their best game of the yet. We kept letting them come back into the game when we should have put them away. We made too many mistakes, but our defense helped us win the game.”

It also didn’t hurt that North Clarion went 14 of 16 from the free-throw line including 8 of 8 in the fourth quarter.

“We also stayed true to playing good defense, and in the end, it paid off,” Dreihaup said.

Up by just the point at the break, Dreihaup said the She-Wolves made some offensive adjustments to get their big girls open inside.

That paid off handsomely with Gwen Siegel scoring eight of her game-high 17 points in the third quarter to help North Clarion extend the lead to six, 31-25, by the end of the quarter.

“Our game plan was to get the ball inside to Gwen, Emily (Aites), and Lauren (Lutz) in the first half,” Dreihaup said. “We didn’t do a very good job of that.

“In the second half, after we made some adjustments to pull them out a little it really opened up inside and Gwen made some moves to the hoop and finished. I think that is why we pulled out that third quarter like we did.”

North Clarion, which is in the PIAA playoffs for the sixth time in seven years (only last year when only the District champions went did the She-Wolves miss out), awaits the winner of Friday’s scheduled game between sixth-seeded Union and third-seeded Otto-Eldred at Otto-Eldred in the semifinals Tuesday, March 1, at a site and time to be determined.

“I think the team has another gear in it,” Dreihaup said. “But they haven’t figured out how to get to it, so we have to rely on defense to pull out these games. I am hoping they find it soon.”

Clarion’s season isn’t over. The Lady Cats move into the District 9 fifth-place consolation tournament where it will play the loser of the Union/Otto-Eldred game in the opening round of a two-round consolation bracket.

ST. MARYS, Pa. – Rolling to a 19-point halftime lead, top-seeded Elk County Catholic cruised into the District 9 Class 1A girls’ semifinals with a 45-19 win over visiting and eighth-seeded Northern Potter.

ECC will take on Ridgway in the semifinals Tuesday, March 1, at a time and place to be announced.

Northern Potter’s season isn’t over. The Lady Panthers move into the District 9 fifth-place consolation tournament where it will play DCC in the opening round of a two-round consolation bracket.

McDowell Boys Rally for Thrilling Overtime Win Over Erie in D10 Class 6A Title Game
General McLane Knocks Off Defending State Champion Cathedral Prep for D10 Class 5A Crown
This website or its third-party tools process personal data.In case of sale of your personal information, you may opt out by using the link Do not sell my personal information.
×
Manage consent