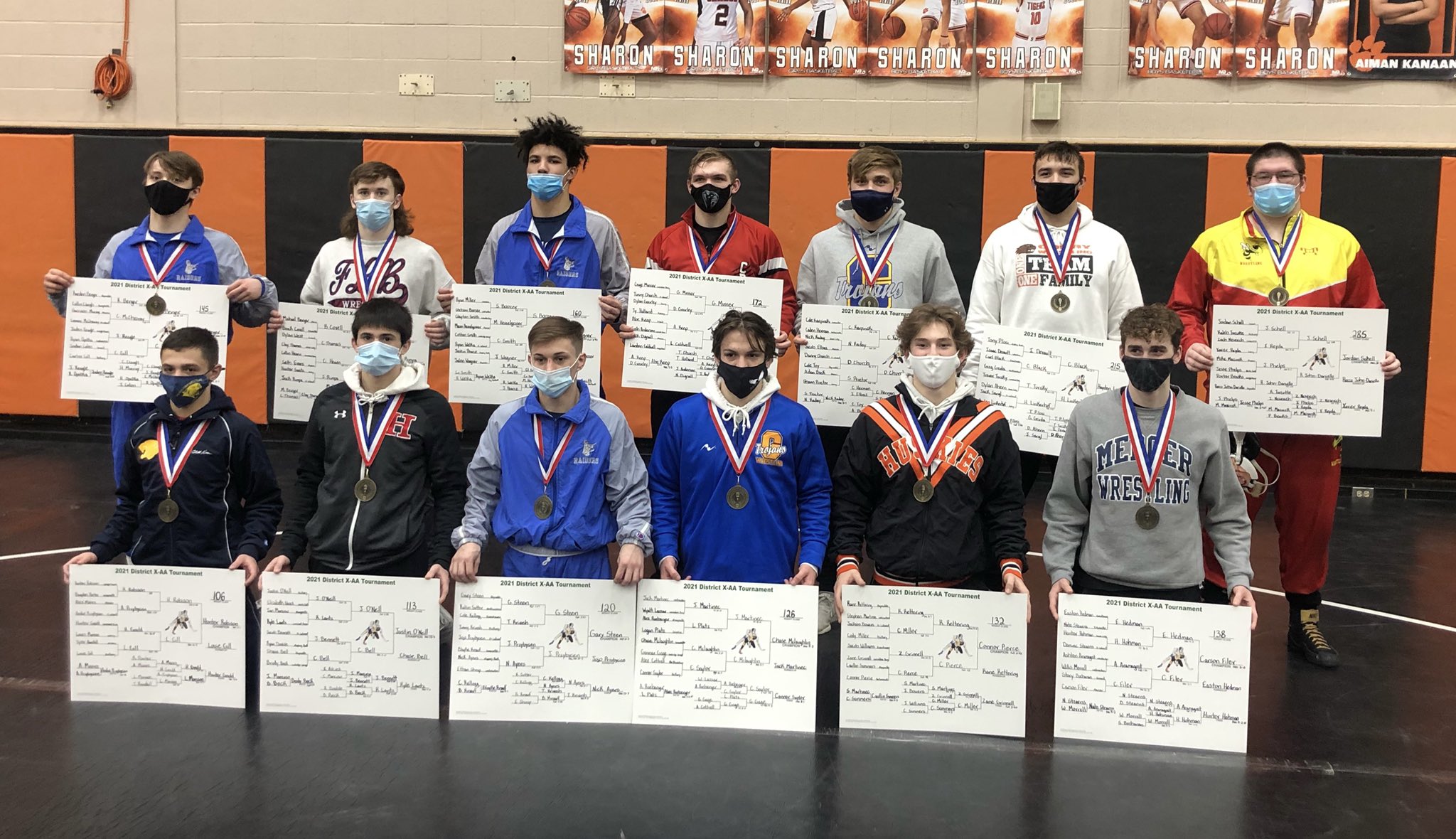 SHARON, Pa. – Though Fort LeBoeuf advanced eight wrestlers to regionals out of Saturday’s (Feb. 20) District 10 2A Championship, it was the Reynolds, with seven qualifiers, who prevailed in the team competition, 143-114. The difference for the Raiders was three district champions, among them four-time titlist Gary Steen, to the Bisons’s one. Reynolds also had three runner-ups and a third-place finisher, while Fort LeBoeuf had two second-place finishers and one third.

Hickory, with one district champion and two-second placers, finished third (98.5 points) and Conneaut, with four winners in the consolation bracket and a consolation runner-up, fourth (71 points). Overall Hickory advanced six to next week’s regional tournament in Altoona (Saturday, Feb. 27), while Conneaut is sending five.

Commodore Perry rounded out the top five (67 points). The Panthers advanced four to Altoona, including a district champion.

Greenville had two district champions, while Corry, Saegertown, Mercer, Harbor Creek, Mercer, and Girard can each lay claim to one.

106 Pounds: Saegertown’s Hunter Robison, a junior, took a narrow victory, 2-1, over freshman Louie Gill of Hickory. This is Robison’s first district title and second trip to regionals, having advanced as a freshman and ultimately qualifying for states. In the consolidation finals, Conneaut freshman Hunter Gould downed Lucas Munsee of Corry, 3-0. A senior, Munsee is now a three-time regional qualifier. Andie Przybycien, a Fort LeBoeuf junior, pinned sophomore Alex Moore of Mercer in the first period (0:58) to claim the final regional qualifying spot.

113 Pounds: Hickory senior Justin O’Neill claimed his first district title with a 13-4 major decision over freshmen Chase Bell of Reynolds. This is the second consecutive year O’Neill has qualified for regionals, doing so in a West Middlesex singlet in 2020. Kyle Lantz, a Conneaut sophomore, took third with a 7-3 win against Jake Benett, a freshman at Fort LeBoeuf. This is the second year in a row Lantz has qualified for regionals. The final regional qualifier was freshman Brody Beck of Cambridge Springs, who pinned Youngsville sophomore Ian Mancuso early in the third period (4:14) of the fifth-place bout.

120 Pounds: Steen won his fourth consecutive district title, the Reynolds senior winning a major decision, 10-2, against freshman JoJo Prezbycien of Fort LeBoeuf. With his win Steen, a three-time state medalist and returning champion ran his season record to 21-0. Slippery Rock senior Nick Ayres captured third, downing Tim Krivosh, a Hickory freshman, 12-7. This will be Ayres’s first trip to the regional tournament. Blayke Knauf of Greenville claimed the last spot at regionals with a 4-1 win over Eisenhower freshman Cole Kellogg. This is the second consecutive year Knauf, a senior, has qualified for regionals.

126 Pounds: Returning state qualifier, Chase McLaughlin, a Greenville senior, won his first district title with a 9-2 decision against junior Jack Martinec of Cochranton. McLaughlin is a four-time regional qualifier and Martinec a two-timer. Hickory sophomore Connor Saylor took third with an 8-1 win against fellow sophomore, Gunnar Gage of Cambridge Springs. Both qualified for regionals last season, with Saylor eventually heading to Hershey. Alex Rueberger, a Sharpsville freshman, won the fifth-place bout and a trip to regionals by downing Seneca’s Logan Platz, a junior, 7-3.

132 Pounds: Connor Pierce, a junior at Harbor Creek, pinned Reynolds junior Kane Kettering in the first period of the finals (0:43). This was Pierce’s second district title in a row. Both Pierce and Kettering were state qualifiers last season, with the former making his third trip to regionals and the latter his second. Commodore Perry senior Zane Grinnell pinned junior Cody Miller of Hickory during the second period (2:50) of the consolation finals. Grinnell is now a two-time regional qualifier, while Miller is advancing for the third time. Freshman Caullin Summers of Sharpsville was the final wrestler to advance, beating Cochranton junior Stephen Martinec, 9-3, in the contest for fifth place.

138 Pounds: Mercer’s Carson Filer, a senior, qualified for his third trip to regionals with his first district championship, a 5-0 decision against another senior, Easton Headman of Eisenhower. This is the first time Headman has moved out of districts to regionals. Freshman Hunter Hohman of Grove City took third with a 4-2 decision against Commodore Perry senior Ashten Armagost, now a two-time regional qualifier. Titusville’s Nate Stearns, a freshman, fought his way to fifth place and a spot in the regional tournament after starting the event as an alternate entry. Stearns decisioned Cochranton junior Willis Morrell, 4-2, when the final spot for regionals was on the line.

145 Pounds: Keaden Berger, a Reynolds senior, won his second consecutive district crown, earning his fourth trip to regionals. The three-time state qualifier and two-time placer downed Hickory junior Carter Gill, 5-1. Gill has now advanced to regionals for the third consecutive year. Senior Collin Clough of Youngsville beat Fort LeBoeuf’s Conner McChesney, 3-1, for third place. This is the second year in a row Clough, Youngsville’s only regional qualifier has advanced out of districts. In the fifth-place bout, Jaden Reagle, a Saegertown senior, qualified for regionals when he pinned Lakeview’s Ryan Opolka, also a senior. Reagle is now a four-time regional qualifier.

160 Pounds: Reynolds’s Jalen Wagner, a sophomore, is a first-time district champion and two-time regional qualifier as the result of pinning Cochranton junior Stetson Boozer in the finals (3:42). Boozer is also a two-time regional qualifier. Clayton Smith, a Commodore Perry junior, took third when Mercer senior Mason Hesselgesser defaulted in the consolation finals. Smith and Hesselgesser are both advancing to regionals for the second time. Ryan Welka, a freshman at Fort LeBoeuf, earned his first trip to regionals when Cambridge Springs senior Colton Smith defaulted out of the fifth-place bout.

189 Pounds: An 8-0 major decision secured the district championship for Greenville junior Cole Karpinski, who squared off against sophomore Dan Church of Fort LeBoeuf in the final round. Karpinski, a state qualifier last year, has now advanced to regionals for the third time in his career. Church is a two-time regional qualifier. Caden Herman, a Harbor Creek senior, pinned Reynolds’s Cole Toy, also a senior, toward the end of the first period (1:56) in the consolation finals. Herman is a first-time regional qualifier, whereas Toy, who finished fourth at states last year, is advancing out of districts for the third time. Nick Kaday, a senior at Union City, downed Corry senior Shawn Proctor, 11-7, for the fifth regional qualifying spot. Kaday is advancing to regionals for the first time in his career.

215 Pounds: Hayden Linkerhoff, a Corry junior, eked out a 9-8 decision against Eisenhower junior Cael Black for the district championship. Linkerhoff is now a three-time regional qualifier, as is Black, who has advanced to the state tournament the previous two seasons, taking sixth in 2020. Conneaut’s Trevor Tursky, a senior, beat fellow senior Isaac DeVault of Lakeview, 3-0, for third place. Tursky, a state qualifier last season, is headed to regionals for the second consecutive year. DeVault is Lakeview’s only regional qualifier, advancing out of districts for the second year in a row. Junior Tony Pilosi of Slippery Rock parlayed his first district tournament into a berth at regionals by pinning Grove City sophomore Dylan Ahern in the first period (1:56) of their bout for fifth place.

Five D9 Wrestlers Claim Titles at D4/9 Class 3A Championships
Brookville Repeats as D9 Class 2A Wrestling Champion; Brockway Freshman Pisarchick Named Most Outstanding Wrestler
This website or its third-party tools process personal data.In case of sale of your personal information, you may opt out by using the link Do not sell my personal information.
×
Manage consent