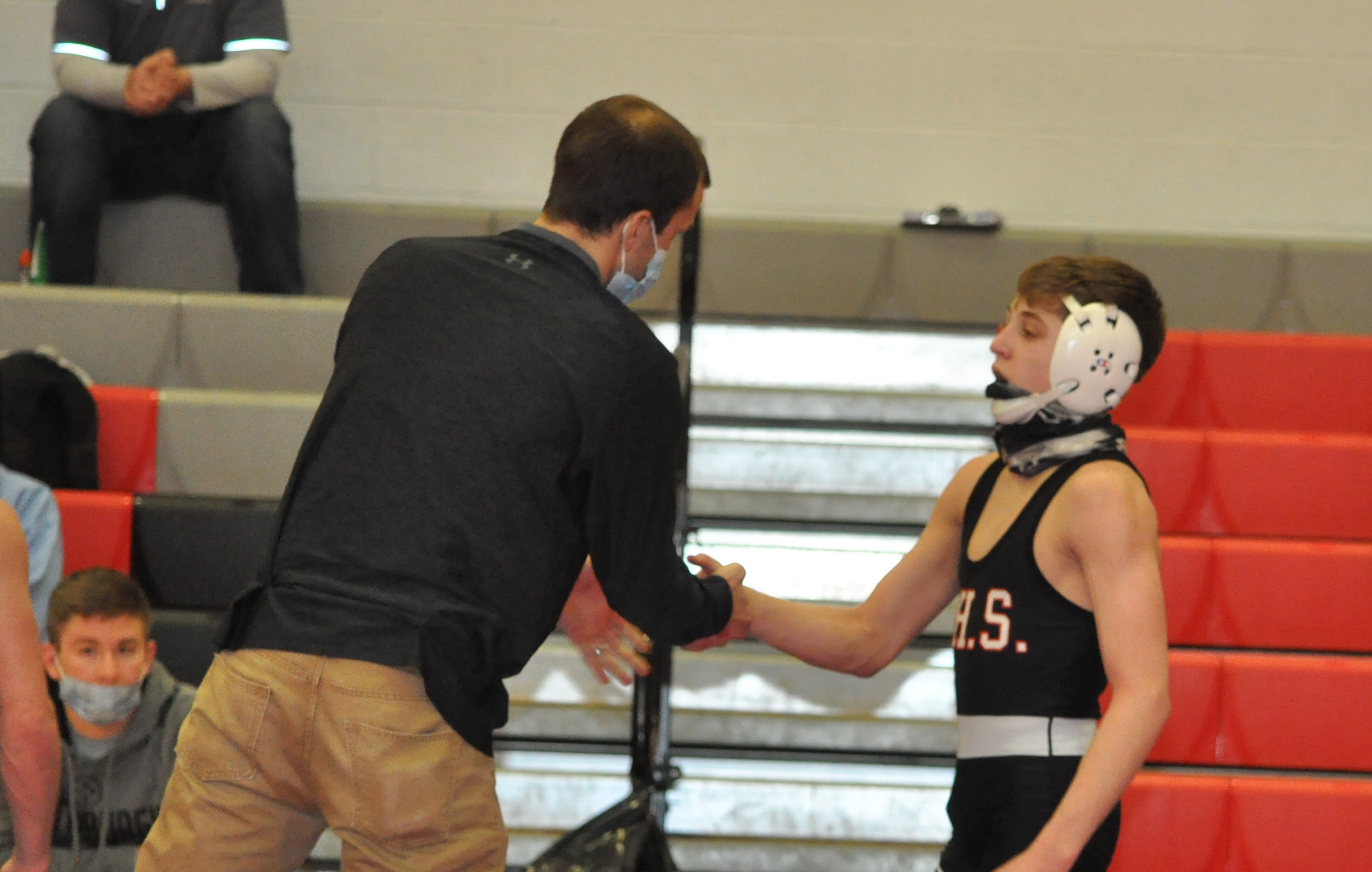 HYDE, Pa. – The more things change, the more they stay the same.

For the second consecutive season, Brookville captured the team title at the District 9  Class 2A Individual Championships at Clearfield.

Brockway freshman Weston Pisarchick also stole the show, racing through the 106-pound bracket, finishing with a 5-1 win over Brookville’s Cayden Walker, ranked No. 2 in the state.

The performance earned him Most Outstanding Wrestler honors.

Pisarchick talked about his honor afterward:

The Raiders finished with 174 points, holding off a challenge from Port Allegany (154).

Brookville had three individual champions – Owen Reinsel at 120, Bryce Rafferty at 215 and Nathan Taylor at 185.

Brookville’s Dave Klepfer was named the Class 2A Coach of the Year.

“Proud of the team effort,” Klepfer said. “I know they all want to be champions and stand on top of that podium, but it’s really just about advancing. Sometimes it’s hard to get that through to a kid when they put the work in to be a district champion.”

Port Allegany matched Brookville with three individual champions, while Johnsonburg and Brockway had two each.

Brief recaps of each weight class, as well as results, are listed below.

106: Pisarchick tech falled Sheffield’s Chase Kyler in the semifinals before facing Walter, who got a first-period pin. Pisarchick got a takedown in the first period and led 2-1 going into the third. After getting an escape, he notched a late takedown to put the match on ice.

113: Jake Carfley the No. 4 seed, got a 5-0 decision in the quarterfinals before earning a 7-5 decision in TB2 over top seed Wyatt Shaffer of Johnsonburg. He rode that momentum to the finals, where he earned a second-period pin over Kane’s Ethan Illerbrun.

120: Reinsel rolled to his third consecutive District 9 title with first-period pins in every match. His longest bout was in the finals, where he put Port Allegany’s Chase Weimer on his back in 1:24.

126: Port Allegany Braedon Johnson also won his third consecutive D-9 crown. Johnson got first-period pins in both the quarter and semifinals before earning a fall over Brockway’2 Mark Palmer in 3:34.

132: Redbank Valley’s Trenten Rupp rolled through the bracket getting second and first period falls in the quarter and semifinals before earning a 10-1 major decision over Ryder Kuklinskie of Curwensville in the finals. It’s Rupp’s second D9 title.

138: Top seed Nolan Shaffer of Johnsonburg held true to form, winning a title after finishing second in each of the last two seasons. He needed less than two minutes combined to earn pins in the quarter and semifinals before earning a 9-3 decision over Kane’s Harley Morris in the finals.

145: The top two seeds, Johnsonburg’s Dalton Stahli and Port Allegany’s Isaiah Caden rolled into the finals. Stahli led 6-4 in the third period when Caden scored a reversal and pinned the Ram at the 5:10 mark.

152: No. 3 seed Taro Tanaka, with a pin and a 2-0 decision, battled his way into the finals, where he met top seed Kaden Dennis of Johnsonburg. Tied 1-1 in the third period. Tanaka scored a takedown with 27 seconds left to win the district crown.

160: Johnsonburg’s Cole Casilio and Brookville’s Wyat Griffin, the top two seeds, rolled into the finals. Casilio won the title after Griffin bowed out with an injury. Klepfer confirmed that Griffin will be good to go for regionals. It’s the second D9 title for Casilio.

172: Brockway’s Noah Bash and Brookville’s Jackson Zimmerman both got semifinal pins to punch their ticket to the final. Zimmerman jumped out to a 4-0 lead in the first after a takedown and two near fall points, but Bash battled back. Trailing 4-1 going into the third, he got a reversal and two near-fall points at the 1:44 mark of the third and held off Zimmerman to win.

189: Unbeaten Sheffield senior Ethan Finch rolled to another District 9 title. Finch scored a 38-second pin in the quarterfinals and won by fall in 2:23 in the semis. In the finals, he faced off with Redbank Valley’s Hudson Martz, pinning him in 1:30.

215: The top two seeds, Redbank Valley’s Aiden Gardner and Brookville’s Bryce Rafferty held serve with second-period pins in the semifinals. Raferty earned takedowns in each period in the final, as well as a pair of escapes to earn an 8-4 victory.

285: Brookville’s Nathan Taylor pinned his way to his second straight D9 title. Both his quarter and semifinals bouts ended in the first period. In the finals, he squared off with Port Allegany’s Justin Young, earning the fall at the 2:55 mark.