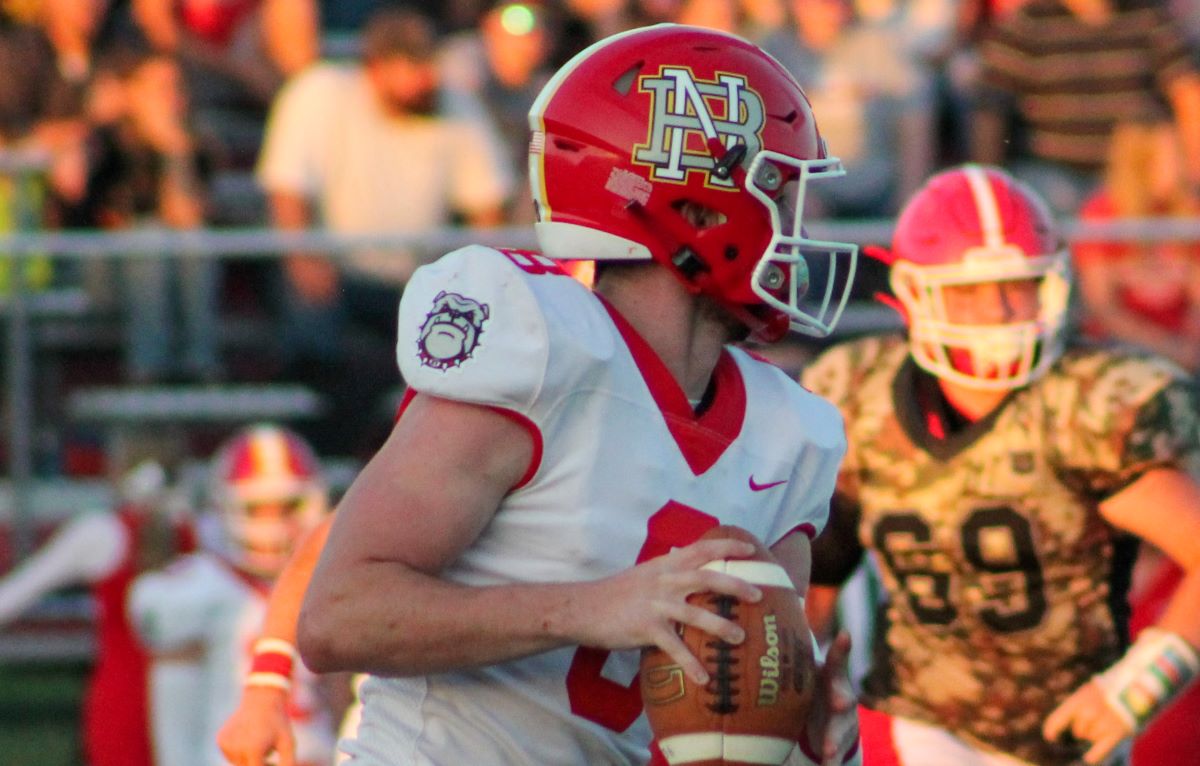 JOHNSONBURG — Trailing 13-0 near the end of the first quarter, unbeaten Redbank Valley scored 28-second quarter points and eventually pulled away for a hard-fought 42-33 win over winless Ridgway at Memorial Field on Johnsonburg’s Homecoming Night.

Cam Wagner keyed the Bulldogs’ big-play offense with five touchdown passes, completing 15 of 24 passes for 314 yards. Four of those TD passes came in a crazy stretch where the Bulldogs ran just six plays from scrimmage — a 20-yarder to Ashton Kahle, a 40-yarder to Aiden Ortz, 73-yarder again to Kahle, and another big play on a 76-yarder to Ortz that put the Bulldogs up 28-19 by halftime.

Then the Bulldogs went 84 yards on 10 plays to start the second half, finishing off their only lengthy scoring drive with Wagner’s 11-yarder to Mason Clouse. Their last TD came when lineman Carsen Rupp returned an interception of Ridgway quarterback Cam Larkin’s screen pass 20 yards to put the Bulldogs up 42-25 with 5:14 remaining.

Larkin played well for the Elkers in their best offensive performance of the season, completing 16 of 27 passes for 197 yards with a 75-yard TD pass to Isaiah Jackson under a minute after Rupp’s pick-six to set the final score with 4:17 left in the game.

Ridgway got an 81-yard kick return from Kaden Dennis that answered the Bulldogs’ TD on Wagner’s 40-yarder to Ortz to re-take the lead at 19-14 with 6:50 left in the second quarter, but the Bulldogs scored TDs on the two 70-yarders on back-to-back offensive plays to grab the lead for good.

Aiden Zimmerman’s 4-yard TD run with 8:47 left in the fourth quarter to get Ridgway within 35-25, but after Ridgway stopped the Bulldogs on downs at the Elkers’ 11 it would be Rupp’s pick-six that essentially put the game out of reach a few plays later.

Ortz had seven catches for 138 yards and two scores with Kahle adding three for 107 and two TDs.

Redbank Valley is 5-0 on the year with Ridgway dropping to 0-5.

WEST SUNBURY, Pa. – Eric Booher’s cast came off and the Karns City passing game took off, as the senior quarterback threw for three touchdowns in the Gremlins’ 35-6 win at rival Moniteau.

Booher tossed two touchdown passes to Micah Rupp (6 and 43 yards) and one to Cooper Coyle (17 yards) while going 5 of 7 passing for 91 yards. He also ran five times for 58 yards and was named the Allegheny Grille of Foxburg Player of the Game.

Coyle also ran for a 44-yard score for the Gremlins, who scored 35 unanswered points after Moniteau led 6-0 at the end of one quarter, and Nate Garing added a 3-yard touchdown run.

David Dessicino scored Moniteau’s lone touchdown on a 1-yard run and ran nine times for 24 yards and was 6 of 16 passing for 51 yards and an interception.

Hunter Stalker led the Warriors on the ground with 14 carries for 63 yards with Logan Campbell adding 10 carries for 43 yards and seven catches for 40 yards most from backup QB Trent Beachem, who was 6 of 8 for 37 yards, all on the final drive of the game.

Karns City is now 3-2 on the year with Moniteau dropping to 1-4.

BRADFORD, Pa. – Jase Ferguson threw for three touchdowns and Connor Kopnitsky was over 100 yards on the ground as Central Clarion improved to 5-0 with a 48-7 win over Bradford.

The Wildcats outscored the Owls, who have now lost 23 straight, 28-0 in the second quarter, as Ferguson threw touchdowns passes of 41 yards to Ashton Rex and a 1-yarder to Tommy Smith, the latter of whom also had an interception on Bradford’s opening drive of the game.

Braylon Beckwith and Kopnitsky also had short touchdown runs in the second quarter.

Kopnitsky was named the Allegheny Grille of Foxburg Player of the Game and talked about the win.

It was the Brady Quinn show in the third quarter, as he had two carries covering 15 and seven yards, both of which went for touchdowns.

Troy Adkins scored on a 2-yard touchdown run in the fourth quarter for Bradford.

Kopnitsky finished with 123 yards on the ground on 15 carries, while Ferguson was 9-of-13 passing for 171 yards and Rex had five receptions for 121 yards.