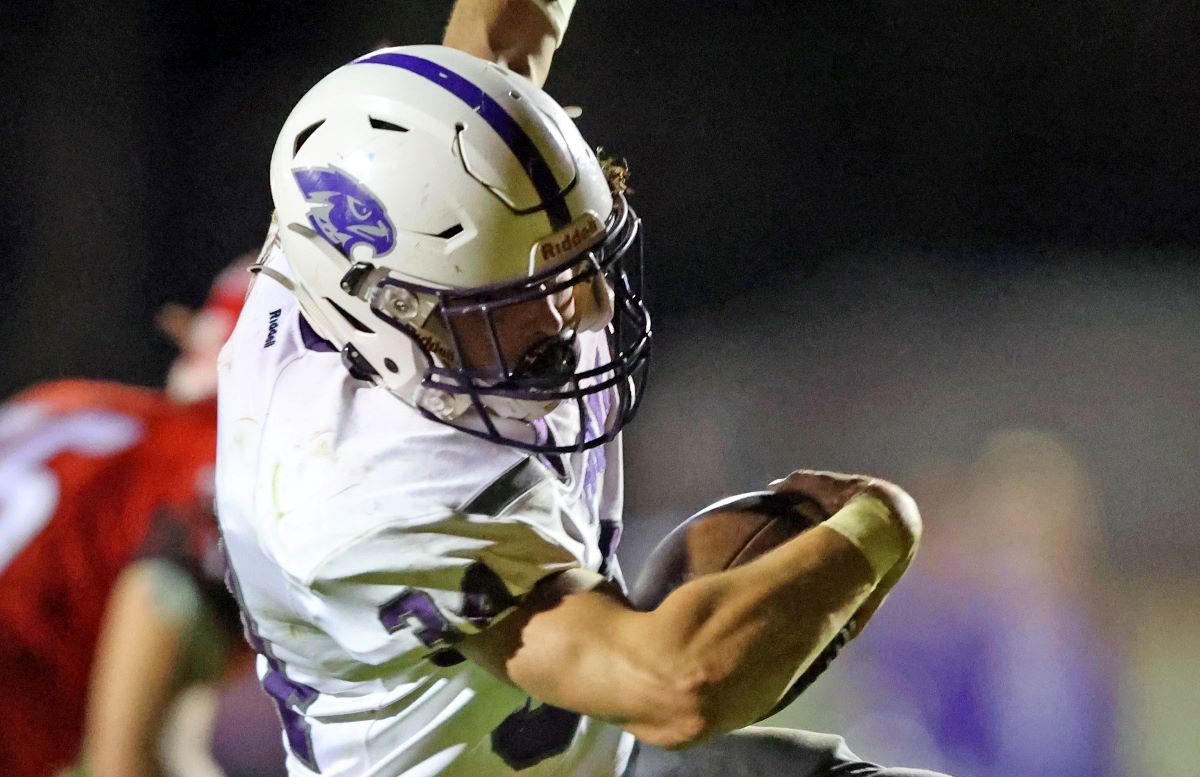 Xander Brown of Coudy scores one of his 3 TDs in the second half Friday in the Falcons win over Cameron County. Photo by Paul Burdick. Check out more of Burdick's work here

The game was scoreless at the break but Brown exploded for touchdown runs of 18, 15, and 84 yards in the second half with the final two coming in the game’s final 3:44

On the night, Brown ran 14 times for 144 yards, the bulk of Coudersport’s 186 yards of total offense.

Meanwhile, the Falcons’ defense limited Cameron County to 148 yards while recording back-to-back shutouts for the first time since recording three in a row during the 2019 season. Making the feat even more impressive was last week’s 16-0 shutout of Smethport came one week after Coudy gave up 70 points in a 70-16 loss to Brockway.

Maddox Baughman was 11 of 30 passing for 109 yards for the Red Raiders while Brevin Lewis caught five passes for 48 yards.

Coudersport is now 3-2 on the year with Cameron County falling to 0-5.

DUKE CENTER, Pa. – In Week One, Elk County Catholic had to hold on for a five-point win over visiting Otto-Eldred.

Friday night, it was an entirely different story for the unbeaten Crusaders, as Noah Cherry ran for five touchdowns in an easy, 49-6, win at Otto-Eldred.

Cherry toted the rock 21 times for 129 yards on the night and was joined in the scoring category by freshman Frankie Smith (7 carries, 60 yards) and Ben Reynolds (10 carries, 54 yards). Smith also caught one pass for 24 yards with Reynolds going 2 of 6 passing for 38 yards.

SMETHPORT, Pa. – Thanks to the running of Kyle Nellis and Tyler Albright, Keystone was able to overcome a slow start and knock off homestanding Smethport, 41-14.

Nellis ran for 140 yards and three touchdowns with Albright adding 111 yards rushing and three catches for 84 yards and two touchdowns for the Panthers, who led by just six, 20-14, midway through the third quarter.

Keystone had to overcome the loss of quarterback Rayce Weaver to an elbow injury to secure the win.

Drew Slaugenhaupt also returned an interception for a score for the Panthers.

Keystone is now 4-1 on the year with Smethport dropping to 1-4.

RIMERSBURG, Pa. – Dawson Camper’s second touchdown of the second quarter just over a minute after Kane had scored to make it a one-possession game helped propel Union/A-C Valley to a 37-19 win at Vidunas Stadium at Union High School.

Sam West scored on a 1-yard run for Kane with 2:34 left in the first half to get the Wolves within seven, 19-12, but Union/A-C Valley quickly answered with a 3-yard Campber touchdown run with 1:31 to play that was set up by an acrobatic catch by Skyler Roxbury inside the 20-yard line.

Up 26-12 at the break, the Falcon Knights all but put the game away on a 31-yard Brody Dittman touchdown run midway through the third quarter.

Camper and Mikey Card both scored twice on the ground for Union/A-C Valley with Camper rushing 22 times for 130 yards and Card eight times for 66 yards. Dittman also ran five times for 44 yards and was 9 of 15 passing for 81 yards.

Roxbury led the Union/ACV receivers with three catches for 51 yards, and Landon Chalmers also had a strong game with 11 tackles, including one for a loss, on defense while hitting a 30-yard field goal in the fourth quarter.

Ryan Cooper also had five tackles, including three for a loss for the Falcons Knights with Max Gallagher making nine tackles and Logan Skibinski seven tackles.

Kyle Zook threw a pair of touchdown passes for Kane including a 55-yard pass to Ricky Zampogna and a 26-yard pass to Scott Szymanski.

Zook was 11 of 18 passing for 140 yards with Zampogan making five catches for 80 yards and Szymanski three for 48. Zampogna also ran 10 times for 39 yards with West adding 10 totes for 30 yards.

HYDE, Pa. – Scoring 35 first-half points, Clearfield rolled to a 42-14 win over visiting Penns Valley, the fourth victory in a row for the Bison.

Brady Collins had a big night on the ground for Clearfield rushing 20 times for 197 yards and a touchdown, while Will Domico was 5 of 7 passing for 82 yards and a score. The touchdown pass went to Carter Freeland, who caught two passes for 54 yards.

Clearfield is 4-1 on the season with Penns Valley falling to 3-2.

Both of Mosier’s touchdowns came in the first half after Punxsutawney had taken an early 7-0 lead.

Mosier, who also returned a punt for a touchdown, caught a 5-yard score in the first quarter to make it 7-6 and then gave the Dutch the lead, 14-7, when he hauled down a 67-yard reception early in the second quarter.

Mosier finished the night with 10 catches for 150 yards, while Coudriet was 16 of 22 passing for 198 yards, three touchdowns, and an interception. Coudriet was also the leading rusher for the Dutch with 61 yards on 13 carries.

Coudriet’s other touchdown pass was an 11-yard toss to Carter Chadsey midway through the third quarter that expanded St. Marys’s lead to 22-7.

Mosier then made it 28-7 when he returned a punt 83 yards for a score.

Bennett also threw a touchdown pass of 44 yards to Noah Weaver on a halfback option pass, while Seth Moore also tossed a 14-yard touchdown pass to Landon Peterson late in the contest.

Moore was 7 of 16 passing for 67 yards with Peterson catching two passes for 15 yards. Zach Presloid also had three grabs for 26 yards. Peterson also picked off a pass on defense.

EVERETT, Pa. – Danny McGarry threw a pair of touchdown passes and added a score on the ground to lift Curwensville to a 33-13 road win over Everett.

McGarry tossed scoring passes of 14 yards to Andrew Pentz and five yards to Chris Fegert while adding a 22-yard scoring run. The senior also tossed a pair of interceptions.

Curwensville, which led 33-0, also got a pair of rushing scores from Chase Irwin, who found paydirt on runs of 25 and five yards, while Fegert added an interception on defense.

The Golden Tide are 3-2 on the year with Everett dropping to 0-5.

DUBOIS, Pa. – Cam-Ron Hays threw two touchdown passes and DuBois scored 17 unanswered points to start the second half to pull away for a 24-14 win over Brookville at Mansell Stadium.

Hays connected with Kaden Clark for a short TD pass in the first quarter then tossed a 40-yard scoring strike to Nathan Koughler in the second half during the Beavers’ decisive run. Also in the second half, Cullen McAllister booted a 29-yard field goal to break the 7-7 halftime tie and Garrett Nissell ran for a 20-yard TD.

Brookville got two TD passes from Easton Belfiore, a 13-yarder to Noah Peterson in the first half and an 11-yarder to Jackson Zimmerman.