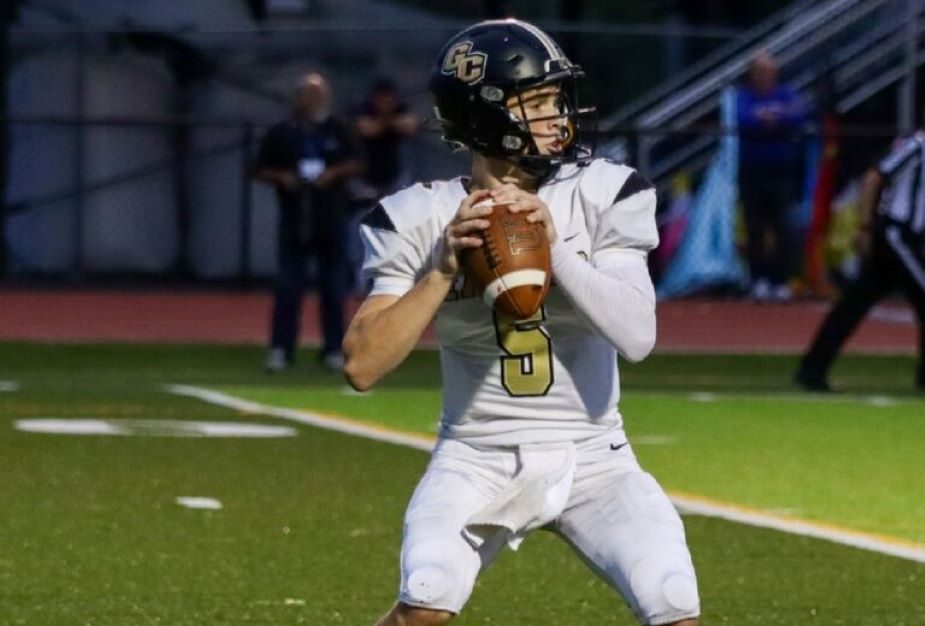 They did so despite the fourth-straight 400-yard rushing effort from Oiler junior Ethen Knox, who rushed for 432 yards and three touchdowns on 48 carries.

Penalties were also a story, as Oil City was flagged 16 times compared to just two for Northwestern.

The game was scoreless into the third quarter before Fountain’s 5-yard touchdown run and Campbell’s extra point gave Northwestern a 7-0 lead just 32 seconds into the second half.

Knox broke loose for one of his patented long touchdowns runs with 1:52 to go in the third quarter, an 88-yarder. He also tacked on the 2-point conversion to give Oil City an 8-7 lead.

Knox followed that up with a 30-yard scoring scamper one minute into the fourth quarter that made it 14-6 after the failed 2-point try.

It was Fountain from one yard out with 8:03 to go to tie the game at 14-all before Knox’s third touchdown of the game, a 1-yard plunge with 2:18 remaining.

Logan Stagl had a monster game on defense for Northwestern, finishing with a school-record 23 tackles. Fountain threw for 122 yards, 80 of which went to Stagl. Campbell finished with 119 yards on the ground, while Kolton Sutter grabbed two interceptions on defense.

Despite the loss, Knox amazing has unofficially gone over 2,000 yards rushing in just five games, with 2,017 yards and 24 touchdowns.

GROVE CITY, Pa. – Hunter Hohman threw a 13-yard touchdown pass to Nathan Greer and then scored on a two-point conversion with 18 seconds left to lift Grove City to a thrilling 22-21 Region 3 win over Slippery Rock.

The Hohman to Greer connection came with 18 seconds left in regulation and came a mere 31 seconds after Slippery Rock had taken the lead.

With the game tied at 14-14, Zip Mokel connected with John Sabo on a 22-yard touchdown pass to cap a 79-yard drive, with Nick Kingerski’s extra point making it 21-14 with 49 seconds remaining.

The Eagles responded, going 60 yards in just three plays and 30 seconds, with the Hohman to Greer touchdown the capper, and coach Sam Mowrey’s decision to go for two paid off when Hohman called his own number.

Hohman had a hand in all three Grove City touchdowns, scoring on runs of nine and 12 yards as in the first half as the Eagles built a 14-7 halftime lead.

Mokel also had two rushing touchdowns, the first of which tied the game at 7-7 in the second quarter and the second of which again knotted the score at 14, a 10-yard scamper with just under six minutes to go in the third.

Hohman finished with 125 yards through the air and 67 on the ground. Anthony Nemec led Grove City with 87 yards on the ground, while Greer had 75 yards receiving.

Mokel had 173 yards passing and 45 yards rushing for the Rockets, while Maddox Allen had 101 yards on the ground and Sabo 64 receiving yards.

McCloskey added 91 yards through the air.

ERIE, Pa. – Ben Moore threw for 215 yards and four touchdowns as McDowell rolled to a 48-6 win over Canada Prep Academy.

Three of Moore’s touchdown passes went to Ray Jackson in the first half, as the Trojans built a 41-0 halftime advantage. Jackson scored on passes of 61, 15 and 10 yards from Moore.

Artis Simmons was once again over the 100-yard mark for the 4-1 Trojans, needing just seven carries to amass his 137 yards. His 50-yard touchdown run was the first score of the game.

Bobby Blue, who finished with 48 yards, scored on a 10-yard touchdown run in the second quarter, and Jake Hower put the finishing touches on the half with a 12-yard interception return for a score.

Moore’s capper came early in the second half when he connected with Trey Goodwine for a 14-yard score early in the third quarter.

Jackson finished with eight receptions for 123 yards and also had one of three McDowell interceptions on defense, while Simmons had three receptions for 42 yards.

STONEBORO, Pa. – Eisenhower held the Sailors’ leading rusher in check, while the Knights ran for over 200 yards themselves, in a 35-13 win at Lakeview.

Lakeview’s (3-2) Mitchell Tingley came into the game averaging nearly 95 yards per game on the ground, and 6.5 yards per carry. The Knights (5-0) limited Tingley to just 3.5 ypc and 56 yards on the ground.

Meanwhile, Eisenhower’s Benji Bauer picked up right where he left off a week ago. Bauer ran for 152 yards and two touchdowns and added a pair of 2-point conversion runs as well.

Tucker Lindell ran for 69 yards and a score, and Shawn Pascuzzi added 43 rushing yards and a TD. Pascuzzi was 3-7 passing for 80 yards. Wyatt Lookenhouse had all three of Pascuzzi’s completions.

Though he had just two carries for five yards, Keegan Eckstrom had an 80-yard kickoff return touchdown to help the Knights’ cause.

Cameron Pence had a hand in both Lakeview scores. He ran three times for 11 yards and a TD and was 4-7 passing for 157 yards and a score. Danick Hinkson had all four receptions for the Sailors.

BUFFALO – Steven Otremba’s 19-yard touchdown pass to Logan Raska, coupled with his 2-point toss to Ethan Metro with 5:59 remaining gave St. Francis a 28-20 lead and helped lift them to a 28-26 win over Cathedral Prep.

Luke Costello followed with a 70-yard touchdown bomb to Camariyon Bridges a minute later, but the two-point conversion was no good.

Ricardo Kidd had 189 yards on the ground for St. Francis.

Suhtaun Lewis had 158 yards on the ground and a rushing touchdown for Prep, while Cole Constable booted two field goals for the second game in a row.

MERCER, Pa. – Daemyin Mattocks rushed for four touchdowns as Mercer rolled to a 45-0 win over Cochranton.

Carter Addison also scored a pair of touchdowns for the Mustangs on a touchdown run and a 69-yard fumble return.

SHARPSVILLE, Pa. – Sharpsville rallied from a 12-0 first-quarter deficit to remain unbeaten with a 14-12 win over Greenville.

Caullin Summers had a hand in both of Sharpsville’s touchdowns, tossing a 46-yard strike to Garen Levis in the second quarter and scoring on a 1-yard touchdown plunge in the third quarter.

Summers finished with 180 yards through the air and 75 on the ground, while Levis accounted for 115 yards receiving.

Malachi Hyde and Nick Solderich scored on touchdown runs for Greenville (0-5). Hyde finished with 120 yards on the ground.

Mikey Rodriques ran for two touchdowns to help account for that early 21-0 advantage and later threw a touchdown pass to Mister Ham.

Rodriques finished with 119 yards through the air and 77 on the ground.

Jayveerh White, who got the scoring going for the Tigers with an 8-yard run, finished with 169 yards on the ground.

Ike Friday added a rushing touchdown for the Tigers.

Tyler Mikulin carried for 75 yards and a touchdown for Wilmington.

LINESVILLE, Pa. – Khalon Simmons scored five touchdowns in the first half as Meadville rolled to a 62-0 win over Conneaut to remain unbeaten.

Brady Walker scored three rushing touchdowns, the last of which came on a 22-yard scamper early in the third quarter.

Nic Williams capped the scoring with a punt return for a touchdown.