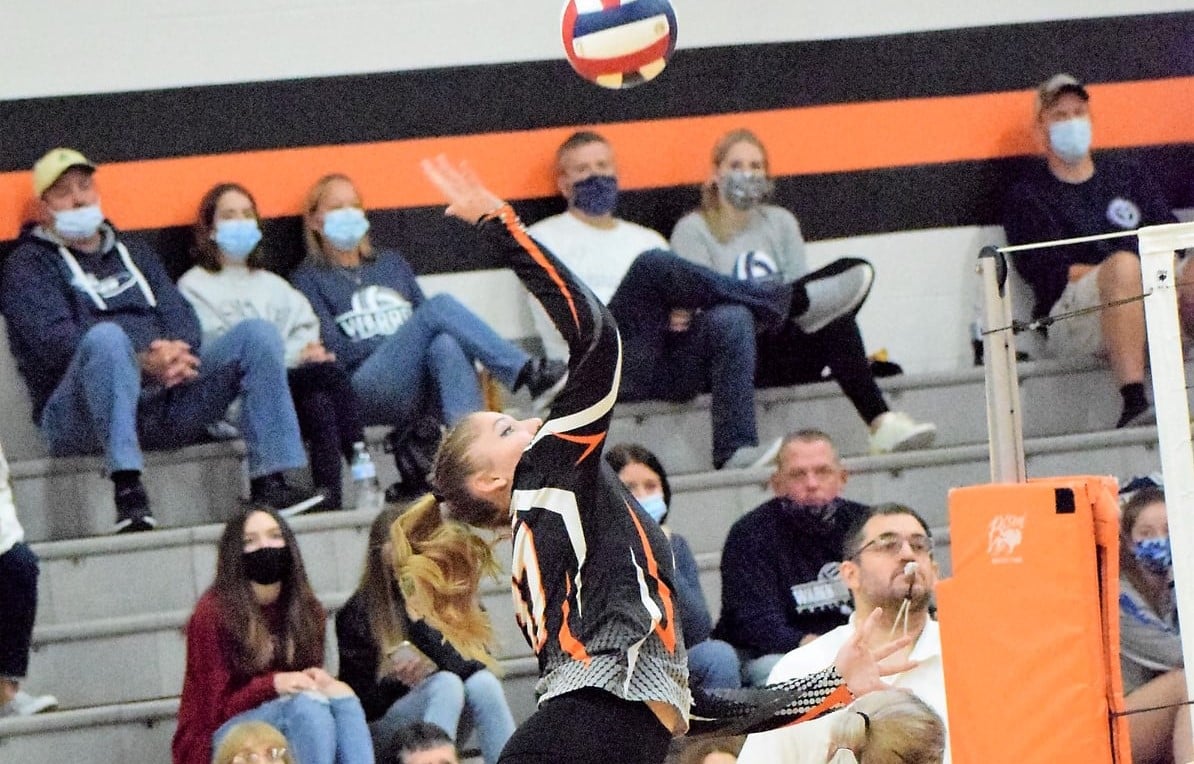 Kaylee Pierson had a strong match in Corry's 3-1 win over Sharpsville in the District 10 Class 2A semifinals Wednesday. Photo by Jeff Parkin

The key to the victory may have been late in the second set when the Beavers faced two set points (24-23 and 25-24) from Sharpsville trailing 1-0 but fended off both to get the 28-26 win.

“While every game was tight, and clearly the second-set win was a turning point for us, I felt confident in each game because we scored 20 points in all four sets,” Corry head coach Kelly Goodsel said.

Kaylee Pierson tied the set at 24 and a service error on Sharpsville, something that haunted the Blue Devils throughout the night, tied things back up at 25.

Taylor Elchynski then served an ace, and Rachel Brady delivered a kill to give the set to Corry.

The Beavers then used a 9-2 run to close out the third set to take a 2-1 lead before jumping out to a 5-0 lead in the fourth set.

The lead eventually grew to six, 19-13, before Sharpsville made a push to get back within two a couple of times, the latest at 21-19.

But the Beavers were too much scoring four of the final five points with Pierson delivering the match-deciding kill.

That was fitting, as Pierson had a strong match with 11 kills, all coming from the second set on. Pierson also had six digs.

Brady led Corry with 19 kills, including eight in the first set while completing a double-double with 10 digs. She also added two aces and two blocks.

Maggie Dow contributed to the win as well with five kills, and Miranda Nickerson had four kills and two digs.

Makenna Moore chipped in nine digs for the Beavers, while Kiran Bugbee ran the offense with 39 set assists and added a team-best 13 digs to go with four aces and two kills. Halle Albers chipped in five aces in the victory.

“I told the team after the match, they beat a very good Sharpsville team,” Goodsel said. “It was the little things that we work on every day in practice, the all-around skills that every player needs to be successful and the commitment the players have who didn’t play much as sophomores or juniors who show up big as seniors in a key match like Kaylee Pierson did.”

Corry might have won in three if it wasn’t for a strong first-set comeback by Sharpsville.

But Cady Benedict, the all-state middle for Sharpsville helped rally them with her kill tying things at 20-all.

The Blue Devils then went up 22-20 before two straight Corry points tied things up at 22.

Sharpsville, though, rolled off the final three points to take the opening set.

Corry will face Harbor Creek in the title game Saturday at a site and time to be announced. The Beavers are now 13-3 on the season and qualified for the PIAA playoffs with the victory.

Benim was particularly strong in the third set when she recorded seven kills, as the Huskies used an 11-0 run in the set to break it open after being tied at eight.

Natalie Gunther’s serving played a key role in the run, as she served most of the run, including a pair of aces.

Cadence Jones had a big match for North East tying Benim with a match-high 13 kills, including five in the first set.

Harbor Creek will take on Corry in the title game Saturday at a site and time to be announced. The Huskies, who are now 20-0 on the season with just one set loss, have qualified for the PIAA playoffs with the win.

Nov. 3, 2021 District 9 and District 10 Volleyball Playoff Scores
DuBois’ Dominance Continues as Lady Beavers Capture Fifth Consecutive D9 Volleyball Crown
We use cookies on our website to give you the most relevant experience by remembering your preferences and repeat visits. By clicking “Accept All”, you consent to the use of ALL the cookies. However, you may visit "Cookie Settings" to provide a controlled consent.
Cookie SettingsAccept All
Manage consent