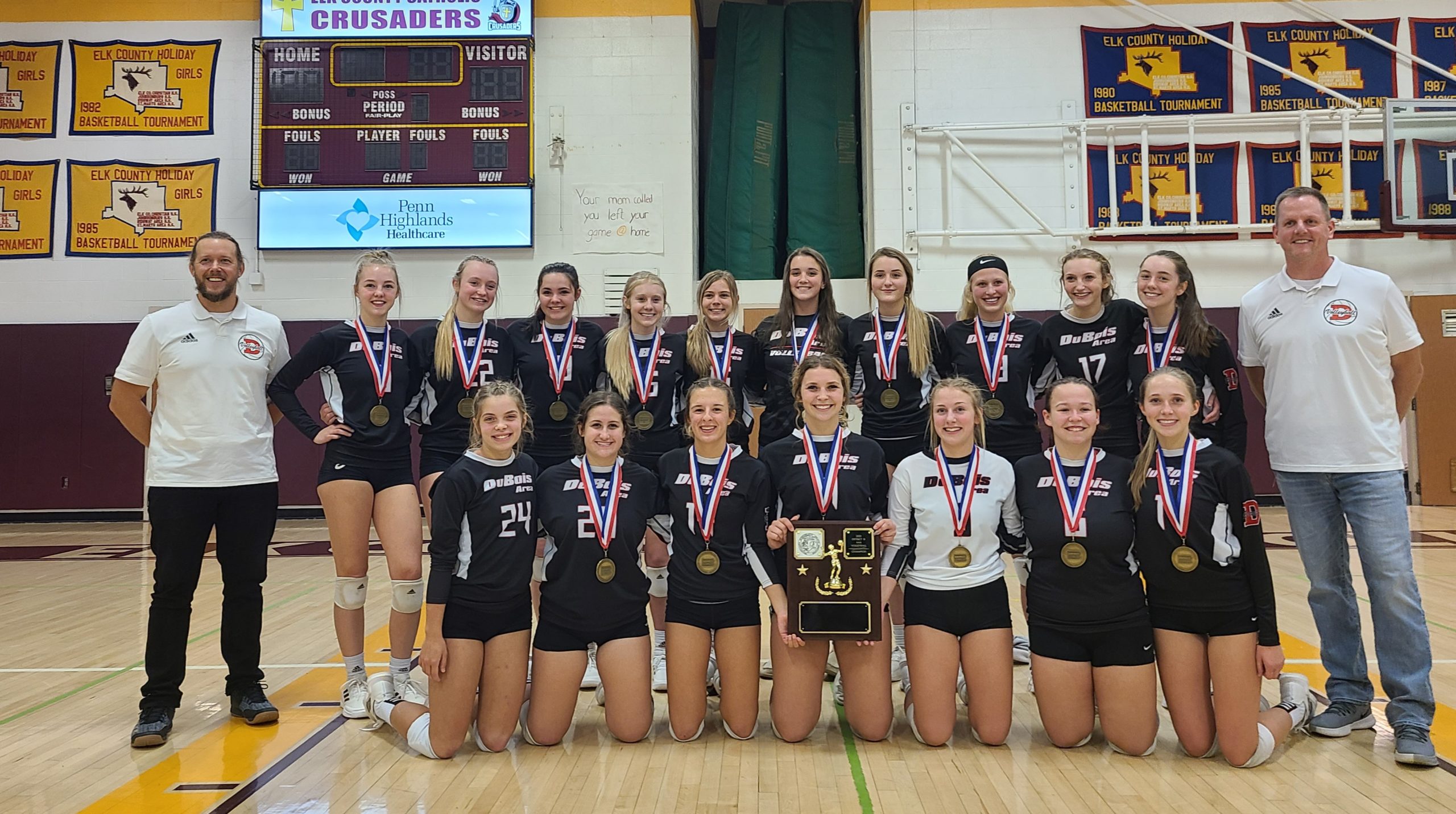 DuBois made it five consecutive District 9 volleyball titles on Wednesday, beating Clearfield 3-0 (25-22, 25-13, 25-9) at Elk County Catholic High School for the Class 3A crown.

It was a performance that got progressively better as the match went along, as the scores indicate.

“I told them game one, no matter who you’re playing, you’re going to have to weather the storm,” said DuBois coach Jason Gustafson. “If you can win game one, that’s a monster, which thankfully we did. We made few enough errors where it didn’t cost us the game.”

And it served as a springboard to a dominant game two and game three.

DuBois is your D9 Class 3A volleyball champion! pic.twitter.com/sClhwyI3yN

Gregory came up big when it mattered the most, including in helping to close out that decisive first game.

Clearfield took a pair of three-point leads, the second of which came at 15-12, , keyed by a block and a kill from Kayla Reed and a Hannah Glunt ace. DuBois responded, however, rallying to ultimately tie the score at 22-22.

They went on a 3-0 run to close it out, including a pair of kills by Gregory.

Game two was much different, as it was all Lady Beavers right from the get-go. A Morgan Pasternak kill made it 9-4 and DuBois was off to the races.

Pasternak, Gregory and Jessica Pfaff all had big swings as the lead continued to swell. The 12-point margin of victory in the second set ended up being DuBois’ biggest lead of the set.

“Our biggest thing is the service line,” Gustafson said. “That’s where we’ve been able to really improve the last couple of weeks. Serve-receive was consistent and we did a good job back there controlling the ball to give them enough time to get settled in to play.”

Game three was more of the same, as DuBois went up 5-0 and really never looked back. The lead grew to double-digits at 18-8 and never dipped below that the rest of the match, with Leah Colville getting in on the offensive act as well.

Gregory led the way with 12 kills, while Pasternak also had a strong game. Gustafson also pointed to the strong play of Ashlyn West and Gabby Gulvas defensively. DuBois’ stats were unofficial.

Glunt finished with nine set assists for Clearfield, while Ruby Singleton and Addy Ruiz had five kills each. Ruiz also had a pair of blocks.

“We played them (Clearfield) this summer, and you know, they’re a good, young, scrappy team,” Gustafson said. “I knew watching them play St. Marys it wasn’t going to be easy.”

DuBois moves on to play the loser of the WPIAL championship between Freeport and Hampton (that match is Saturday) on Nov. 9 in the first round of the PIAA playoffs.

Pierson, Brady Lead Corry into D10 2A Championship Match; Harbor Creek Rolls into Title Match
D9and10Sports.com to Broadcast Class 2A Soccer Championship Games, Class 1A Volleyball Final Thursday
This website or its third-party tools process personal data.In case of sale of your personal information, you may opt out by using the link Do not sell my personal information.
×
Manage consent