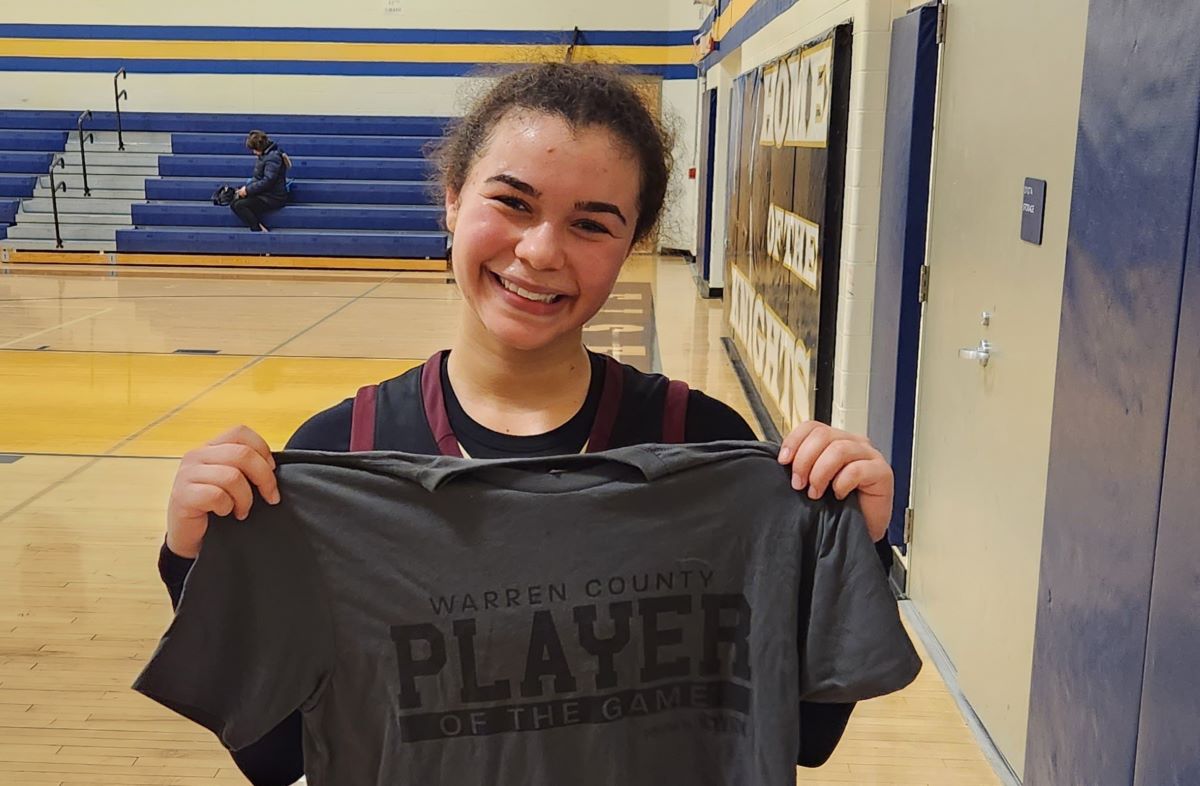 North East jumped out to a 10-0 lead, but Eisenhower cut the lead to 18-11 after the first quarter.

“The key (to the hot start) honestly was just passing to each other,” Triana said. “I think we shared the ball really well and that helped us for sure.”

North East, which has won four straight, went on a 17-5 second-quarter run, however, to assume control.

Triana, who was Player of the Game, talked about the win:

Triana scored 12 points in the first half and 14 points in the second half, while Gigi Gaston was also in double figures for the ‘Pickers with 14 points, while Kayla Forsythe added 13.

YOUNGSVILLE, Pa. – Riley Robinault had a monster game with 30 points as Youngsville earned a 61-43 win over Jamestown.

Robinault scored 12 of her 30 points in the second quarter, as Youngsville built a 30-19 halftime lead. All of her field goals were of the two-point variety.

Olivia Darling was also in double figures with 10 points, while Shea Walton added eight for Youngsville.

Taylor Keener led Jamestown with 14 points, while Kiley Matters had 13.

Greenville built a 22-8 halftime lead en route to the win.

Josie Lewis was also in double figures scoring for Greenville with 11 points.

Mackenzie Yanc had 10 points and Jordyn Wheeler had seven for Cambridge Springs.

BRADFORD, Pa. – Alana Stuart and Sammie Ruhlman each had 16 points to help lead Warren to a 66-22 win at Bradford.

Ruhlman scored eight of her 16 points in the first quarter as the Dragons, winners of four straight, jumped out to a 23-8 lead. Warren nearly doubled its effort in the second, pouring in another 22 points to take a 45-16 halftime advantage.

Stuart balanced her 16 across the game with five in the first, four in the second, four in the third, and three in the fourth. She also added seven rebounds. Ruhlman had six assists.

Layke Fields poured in 21 points as Kennedy Catholic earned a 42-39 win over Indiana.

Julia Antonacci had 17 points for Indiana.

MEADVILLE, Pa. – Madison Jones had 11 points as Hickory earned a 43-27 win over Meadville.

TITUSVILLE, Pa. – Jamoria Crumby had 13 points and Lacey Root 11 as Sharon earned a 47-9 win over Titusville.

CAMBRIDGE SPRINGS, Pa. – Cambridge Springs outscored Eisenhower 35-16 in the second half on its way to a 59-37 Region 3 win.

Owen Riley was also in double figures for Cambridge Springs with 10 points.

SAEGERTOWN, Pa. – Saegertown scored 42 first-half points, taking a 22-point lead on its way to a 70-40 Region 3 win over Cochranton.

Cole Doolittle scored eight of his 13 points in the first half for Maplewood, while Ethan Peterson
had 10 points and Jacob Woge nine.

Tristan Shelatz scored eight of his 20 points in the fourth quarter to help led CASH to the victory.

Shakiir Jordan scored 13 of his 18 points in the first half for CASH, while Alex Brady was also in double figures with 12 points.

Union City’s Bryce Drayer had a strong game in defeat, scoring 15 of his 20 points in the first half. Wyatt Post and Josh James were also in double figures for Union City with 13 and 10 points, respectively.

SUGARCREEK BOROUGH, Pa. – Rocky Grove exploded for 50 points in the second half on its way to a 75-58 non-region win over Sharpsville.

The 50 points also included a 29-11 run in the fourth quarter for the Orioles.

Rocky Grove was 20-of-22 from the free throw line in the win.

Braden Scravel poured in a game-high 21 points for Sharpsville, while Liam Campbell had 18 points.

Kennedy Catholic put up 46 points in the first half, taking a 46-15 halftime lead.

Remington Hart had 16 points for the Golden Eagles, while Simeir Wade had 13 points and Thorsten Hart 11.

Farrell outscored Lakeview 28-10 in the third quarter on its way to the win.

Lamont Samuels and Malachi Owens were also in double figures for Farrell with 12 and 10 points, respectively.

Cody Fagley had 11 points and Evan Reiser 10 for Lakeview.

Tyler Grove and Blayze Myers were also in double figures scoring for McDowell with 15 and 14 points, respectively.

Nick Krahe was also in double figures for Harbor Creek with 12 points to go along with eight rebounds, while JT DelSandro added 12 points.

Markus Lambert had 14 points for Corry.

Cam Keyser had 14 points for Jamestown.

Jake Sambuchino led the way for the unbeaten Ramblers with 24 points and rebounds.

The Bulldogs went on a 20-13 run in the fourth quarter on their way to the win.

Jack Burchard added 10 points for Meadville in the win.

Girard went on an 18-7 run in the second quarter to take a 14-point halftime lead en route to the win.

Archie Murphey had 18 points and Jeremy Frazao 16 for Fairview.

Kyle Stringert had 13 points for CP.

David Bahm added 11 points for Mercyhurst Prep in the win.

Landon Wayne had 10 points for Northwestern.