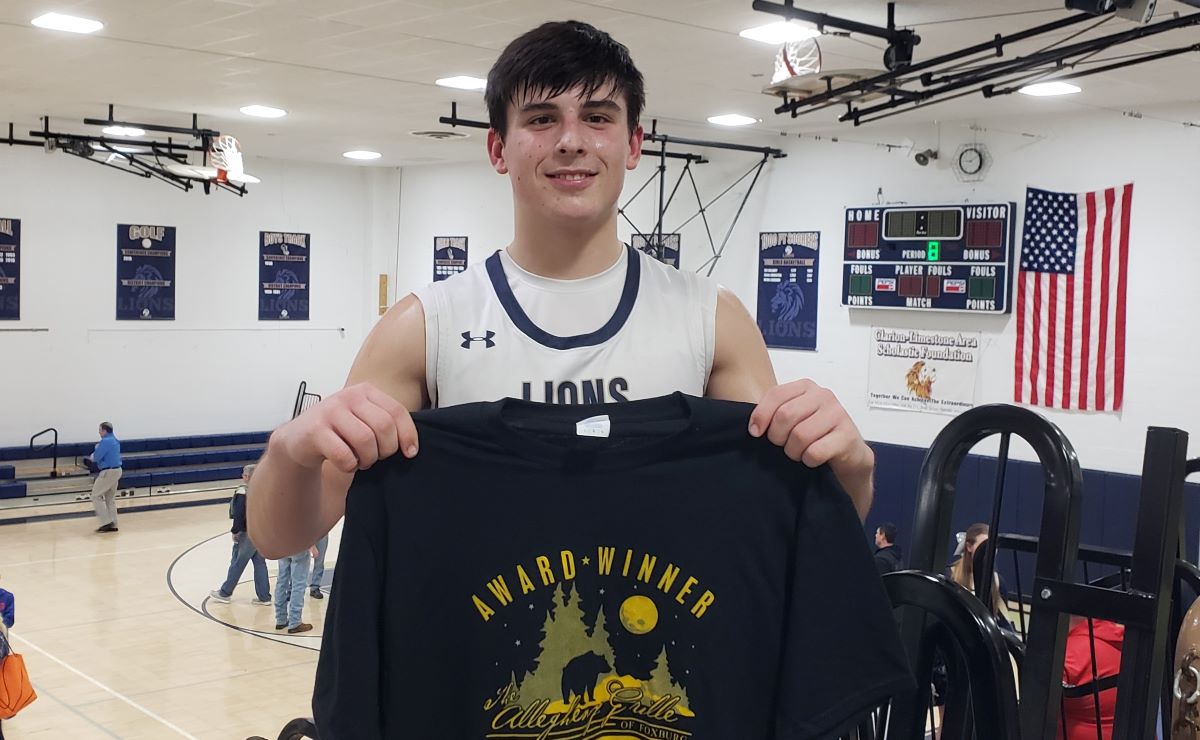 The Lions actually trailed 8-0 right out of the gate but scored 23 of the next 25 points to take control of the game, 23-10, by the end of the first quarter.

Jase Ferguson scored nine of his game-high 16 points in the first quarter on his way to being named the Allegheny Grille of Foxburg Player of the Game.

Ferguson discussed his and his team’s performance,

The Lions used a full-court, pressure defense to turn the game around after the slow start with Ferguson and Rankin each coming away with four steals and Jack Callen adding three steals.

HYDE, Pa. – Hitting six third-quarter 3-pointers, Clearfield rallied from seven down at the half and then held off a fourth-quarter rally from Tyrone to beat the visiting Eagles, 61-59.

Tyrone led 39-32 at halftime before Clearfield got hot in the third quarter.

The Bison used 3-pointers in the quarter from Andon Greslick (2), Anthony Lopez (2), Morgen Billotte, and Cole Miller to outscore Tyrone 21-6 to take a 53-45 lead going the fourth quarter before holding off an Eagle comeback attempt.

Miller had a monster game for Clearfield with 27 points and 15 rebounds while Billiotte added 10 points, Greslick eight, and Lopez seven.

KARNS CITY, Pa. – In a slugfest defensive battle at Karns City, Devon Lauer and Dawson Smail both had big third quarters to help Clarion to a 38-31 win over the Gremlins.

With Clarion leading 12-11 at halftime, Lauer and Smail combined for 17 of the Bobcats’ 18 third-quarter points as they expanded the lead to 30-25 going to the fourth quarter.

Lauer had nine of his 13 points in the third quarter with Smail adding eight of his game-high 18 in the third. Smail added eight rebounds and six steals.

KNOX, Pa. -Keystone slowly pulled away from North Clarion for a 69-50 win over the visiting Wolves.

The Panthers led 36-33 at halftime before expanding the lead to eight, 52-44, going to the fourth quarter.

ST. MARYS, Pa. -St. Marys built an 11-point lead after the third quarter on its way to a 35-29 win over visiting DuBois Central Catholic.

BROCKWAY, Pa. – Visiting Elk County Catholic got a game-best 15 points from Sydney Alexander on its way to a 43-21 win over Brockway.

The Stingers trailed 13-9 at the end of the first quarter before taking a 26-24 halftime lead. They were still up one, 36-35, going to the fourth quarter before getting the big shots from Elkin and Miller to hold off the Lady Beavers.

The duo combined for 33 points led by Elkin’s 19 tallies with Miller adding 14.

BRADFORD, Pa. – Alana Stuart and Sammie Ruhlman each had 16 points to help lead Warren to a 66-22 win at Bradford.

Ruhlman scored eight of her 16 points in the first quarter as the Dragons, winners of four straight, jumped out to a 23-8 lead. Warren nearly doubled its effort in the second, pouring in another 22 points to take a 45-16 halftime advantage.

Stuart balanced her 16 across the game with five in the first, four in the second, four in the third, and three in the fourth. She also added seven rebounds. Ruhlman had six assists.

Picking Up Where They Left Off: North East Girls Win Fourth Straight; Greenville Girls Stay Perfect Jan. 3
Jan. 4, 2023 District 9 and District 10 Basketball Schedules Powered by Hunter’s Station Golf Club
This website or its third-party tools process personal data.In case of sale of your personal information, you may opt out by using the link Do not sell my personal information.
×
Manage consent