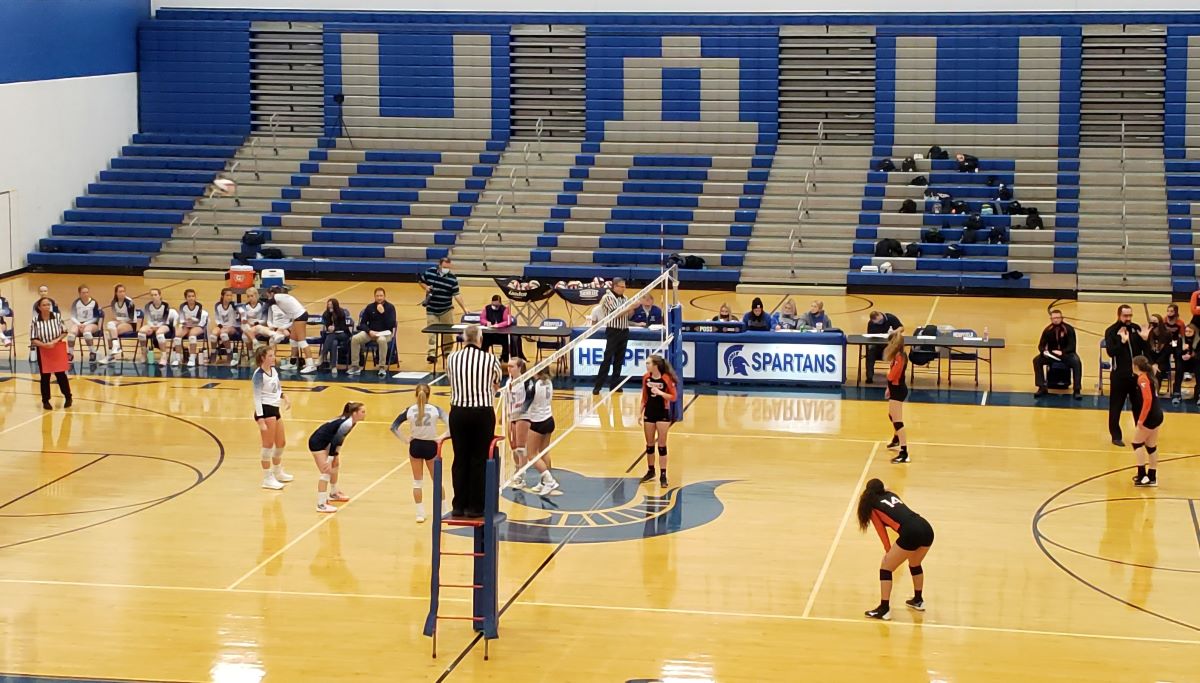 HEMPFIELD TWP., Pa. – The best Harbor Creek volleyball season in a quarter of a century ran into Reese Hazelton Saturday afternoon at Hempfield High School just outside of Greensburg.

“We were just trying to have our defense in place and ready to go when she does swing,” Harbor Creek head coach Ryan Smock said. “You just try to slow balls down as much as you can, maybe get one or two here or there. The defense wasn’t the problem.”

What was a problem for Harbor Creek was getting into system.

“We just made way too many uncharacteristic errors in sets one and two,” Smock said. “I kept harping on it. They were just kind of tentative and wouldn’t let themselves go.”

Passing led to too many free balls over the net, and serve receive, especially in the first two sets, was an issue.

Philipsburg-Osceola recorded nine aces in the first two sets, including six in the second set alone, and 17 in the match. And even when the serve didn’t result in an ace, many times it was a leading cause of Harbor Creek not being able to set up its offense.

“We had to adjust to it,” Smock said. “They’re just hitting good balls that we weren’t doing a great job handling. We weren’t in the best passing [ositions a couple of times.”

When Harbor Creek couldn’t get an attack going that helped Philipsburg-Osceola set up its attack.

And Hazelton, only a sophomore, was a huge part of that attack recording at least five kills in each set including nine in the third set and eight in the fourth.

“That’s been her for the last two years,” Philipsburg-Osceola head coach David Eckberg said. “She’s a once in a career type of player for a coach. She’s always ready for the spotlight and the big point. She stepped up when we needed her at key times tonight.”

What makes the Mounties, who were PIAA runners-up last year while being ranked No. 1 in the state this year by the Pennsylvania Volleyball Coaches Association, so dangerous is Hazleton isn’t the only strong hitter.

London Cutler added 15 kills to a 50-kill attack for Philipsburg-Osceola and also had seven digs and a block.

“She’s a senior,” Eckberg said. “She is just a smart player. She’s definitely undersized. We just work on her being the smartest hitter in the gym, just like the outside for Harbor Creek is very smart. (London) moved the ball around well tonight and limited her errors. She’s been that kid for us for four years now.”

Limiting errors was something the Mounties did well in three of the four sets.

Philipsburg-Osceola only committed 19 combined service and hitting errors on the day with 10 of those coming in the third set when the Mounties had seven of their 11 hitting errors.

Some of those mistakes were caused by Harbor Creek showing resilience in the third set after losing the first two sets handily.

A 5-0 Philipsburg-Osceola run followed thanks in part to a pair of Hazelton kills to make it 22-21. But Elena Cubero came up with a big kill to make it 23-21, and Zank put the set away with her third kill of the set.

Cubero had a strong match for Harbor Creek with seven kills and eight digs, while Daley had a team-best 12 kills.

“Anna did do a nice job,” Smock said. “But we weren’t doing a good enough job passing to put her and Sam (Zank) to win balls at the net. Once we were able to do that, she’s definitely capable of doing so. She had a nice stretch there.”

Despite the loss, Smock was pleased with how the season went with Harbor Creek’s first District 10 title in 25 years.

“We are incredibly happy with how the year went,” Smock said. “I would take all these girls back in in a second. We showed our character today. Things weren’t going well, and you saw us fight back. We earned at least that third set win, and we got off to such a good start in the fourth set (up 10-4).”

Philipsburg-Osceola will try to make it a second straight trip to the PIAA finals when it faces WPIAL champion North Catholic, who swept District 5 champion Bedford, 3-0 (25-20, 25-13, 25-8), in the semifinals Tuesday.

Lauren MacDonald scored the only goal the Trojans needed about 10 minutes into the game before Sharpless delivered a backbreaking goal in the final 40 seconds of the first half.

Freshman Kathleen Viroostek closed out the scoring for North Catholic in the second half.

HOLLIDAYSBURG, Pa. – Alex Murphy scored on a penalty kick with just 1:42 to play to lift District 3 champion Central Dauphin to a 1-0 win over District 10 champion McDowell in the PIAA Class 4A girls soccer quarterfinals at Hollidaysburg High School.

Central Dauphin will take on WPIAL champion Moon, a 1-0 winner over District 1 runner-up Owen J. Roberts, in the semifinals Tuesday.

Listen Live: Clarion vs. Greensburg Central Catholic PIAA Class 1A Volleyball Quarterfinals
Clarion Volleyball Cruises Past Greensburg Central Catholic, Into PIAA Class 1A Semifinals; Cochranton Falls in 5
This website or its third-party tools process personal data.In case of sale of your personal information, you may opt out by using the link Do not sell my personal information.
×
Manage consent