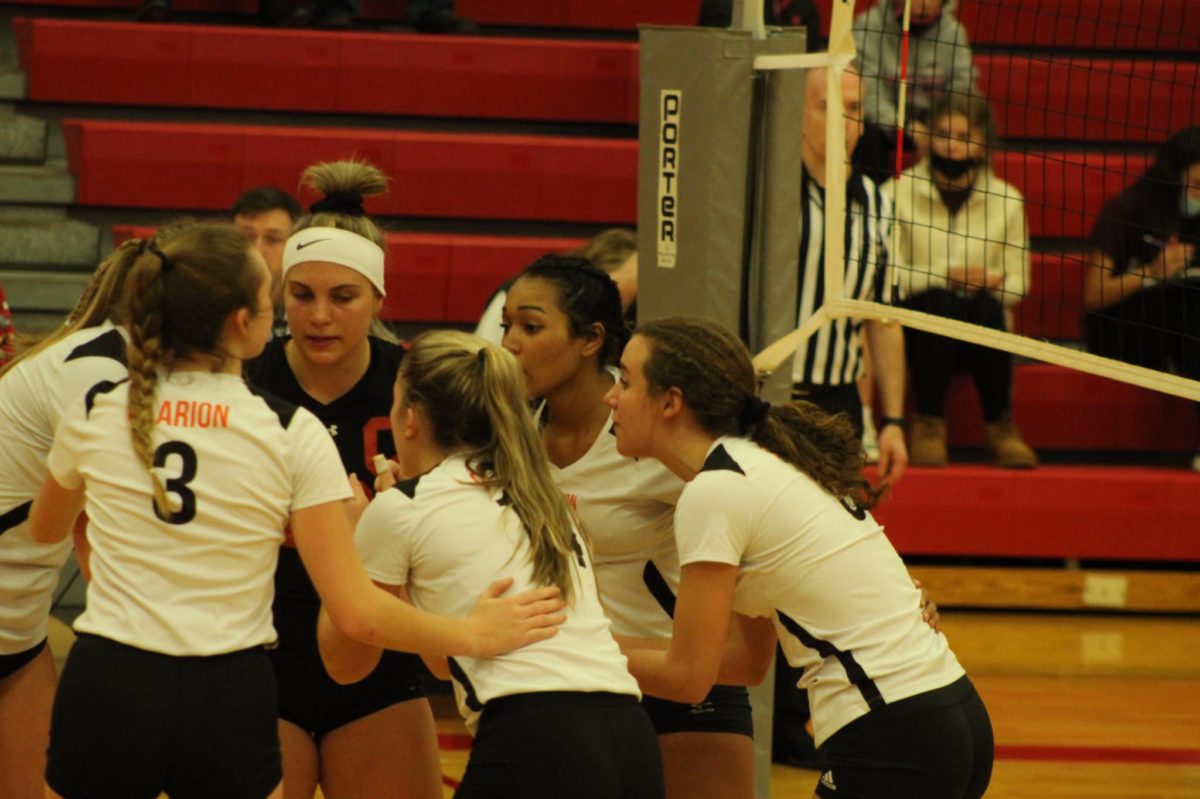 Clarion earned a 3-0 win over Greensburg Central Catholic to advance to the PIAA semifinals. Photo by Nathan Girvan.

Listen to the match:

The Lady Cats trailed briefly in both the first and second sets, falling behind 7-5 in the and 1-0 in the second. But they rattled off the next four points in the second and never trailed again the rest of the match.

“We had a great match passing, setting, and all-around hitting,” said Clarion’s Korrin Burns. “We felt very confident in this match. “It was business-like. We said let’s get it started, let’s get it going.”

“We just really try and be in the moment and not get too emotional and stay the course,” said Clarion head coach Shari Campbell. “You know, just take it one point at a time and it all adds up. And it’s not just one person, we do it as a team.”

That one point at a time approach paid off in the first two sets, as Clarion was in control, but was never quite able to pull away from the Centurions.

Anthony set Burns several times early to begin the match, as the Lady Cats were able to build leads of 16-12 and 23-17 and were able to close it out.

Burns led the way with 20 kills, as five different Clarion players had kills in the match.

“We just take it one point at a time, stay focused and stay calm,” Anthony said.

Clarion was able to build a 12-7 lead in the second thanks to kills from Burns, Payton Simko and Aryana Girvan, and the lead stayed between three and five until GCC, the WPIAL runner-up, cut it to 19-18 and eventually evened things up at 21-21

Clarion, as they typically do, responded with a 4-1 run to close the set and take a commanding 2-0 lead.

“We’ve gone to three quad-A tournaments this year, and they put a lot of pressure on us,” Campbell said about her team being used to pressured situations. “That is like money in the bank to know when your back is against the wall that you can answer. We put a lot of pressure on ourselves in our gym also. We push each other hard. Some of the best ball we play is in our own gym against each other. So yeah, we want this to feel relaxed because we choose to put pressure on ourselves a lot.”

The third set was all Clarion, as they jumped out to a 10-5 lead and an ace from Adia Needham made it 14-7. The lead never got below five the rest of the way.

Anthony ran the offense to the tune of 34 assists, while Girvan finished with seven kills, Simko six kills and seven digs and Taylor Alston and Needham two kills each. Jordan Best led the defense with 12 digs.

Next up for the Lady Cats is a berth with Bishop Canevin in the semifinals, with a trip to their second consecutive PIAA final on the line.

“We’re always happy to get back (to the semifinals) and never overlook it,” Campbell said. “Canevin is a good team. We’ll just play our game. We’re going to gain some confidence from this win, capitalize on that and get a game plan for Canevin.”

Cochranton was riding high, up 2-0 on Bishop Canevin and on the verge of a berth in the PIAA Class 1A semifinals.

The Crusaders had other ideas, however.

“It was a good season, but that’s how you don’t like to see it end,” said Cochranton coach Marci Marci Malliard. “You win the first two and then lose the next three, it doesn’t feel very good.”

Listen to the match:

Abby Maziarz and Kyla Hartoyo were the biggest factors in the Canevin rally. The Crusaders jumped out to a 5-0 lead in the third, prompting a Cochranton timeout, but they were unable to stop the charge. The lead swelled to 18-6, with Cochranton unable to get any closer than nine points the rest of the set.

It was more of the same in the fourth as again Canevin jumped out to a quick lead, 7-2. Devyn Sokol swung big for Cochranton all match to the tune of 25 kills and had one to get the Lady Cardinals back within two at 11-9, but the Crusaders responded with a 10-4 spurt to reassume control.

The fifth and decisive set began 2-2 before Canevin went on a 7-2 run and ultimately never looked back in completing the comeback.

The match played out much like their first-round PIAA matchup against Homer-Center when the Lady Cardinals won the first two sets and dropped the next two. But unlike that match, they weren’t quite able to close this one out.

“We just seemed to lose that confidence,” Malliard said.

Cochranton led most of the first set, trailing briefly at 16-4, but with the score tied at 20, they were able to close it out thanks in large part to Sokol, who had seven kills in the set.

Dana Jackson effectively ran the offense to the tune of 34 assists for Cochranton.

“We’ll reflect on this and look forward to next year,” Malliard said. “They all have to be real excited about next year. There’s certainly a lot to build on.”

Philipsburg-Osceola Tops Harbor Creek in PIAA VB Action; Mercer Boys; Villa Maria, McDowell Girls All Fall in Soccer
PIAA Announces PIAA Semifinal Locations, Times for Volleyball
This website or its third-party tools process personal data.In case of sale of your personal information, you may opt out by using the link Do not sell my personal information.
×
Manage consent