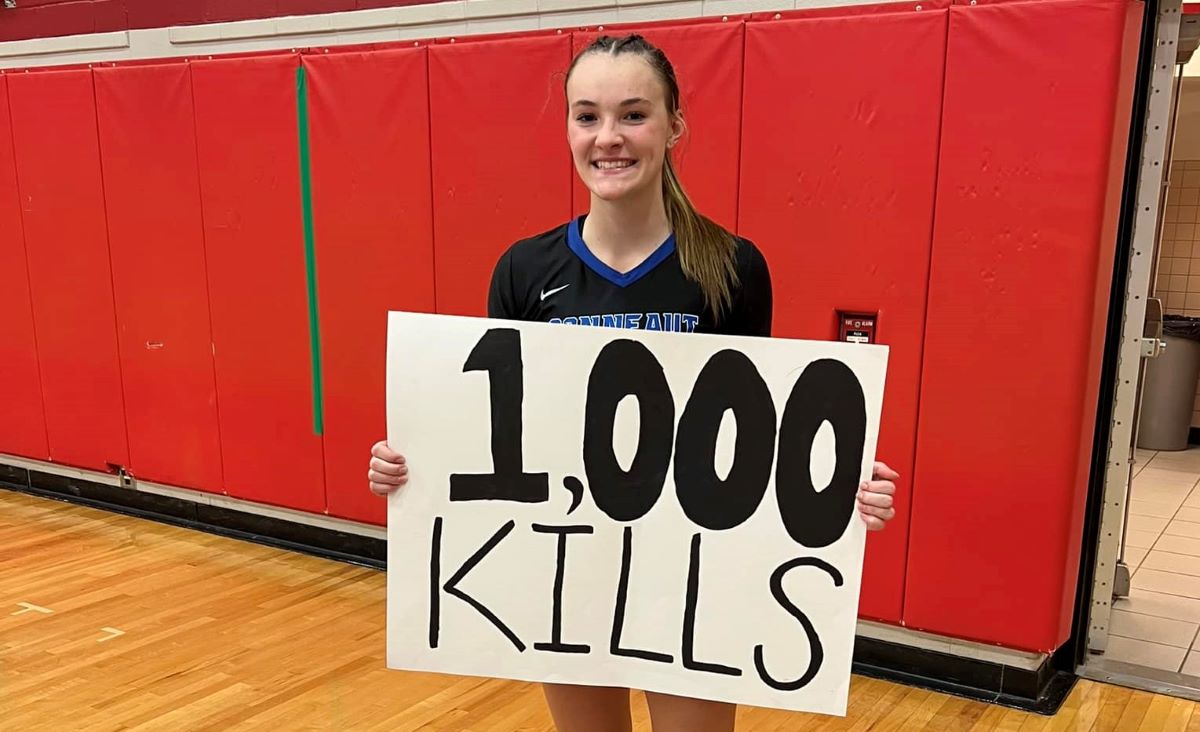 Mattera came into the night needing six kills to reach the milestone and blew right through it. She also added six digs and two aces.

Lainie Harrington added 12 kills for the Eagles who also got nine kills from Sylvia Prebor.

Emma Parks had another big night for Meadville with 21 kills and 10 digs. Ellie Kellick added five kills for the Bulldogs, and Elliott Schleicher ran the offense with 29 set assists.

Fry came in needing just two digs to reach the milestone and did so early in the victory.

Dunn, who was named the Allegheny Grille of Foxburg Player of the Match, added 10 kills, four aces and a kill with her kills ending the match. She played through tweaking her injured right knee in the third set.

The Lady Lions were leading 18-14 when Dunn went down in pain in that third set. By the time she returned to the court, C-L trailed 20-19 but scored the last six points with Dunn as the emotional leader to break a 1-1 set tie at the time.

Dunn talked about her performance and the win.

Jenna Stefanacci ran the offense for the Lady Falcons with 19 set assists and added 15 digs.

Isabella Rees added eight kills, 11 digs, and seven blocks for the Lady Panthers who also got 11 kills and four aces from Jade Williams and 35 digs from Ella Brewer.

Marah Fowler ran the offense for Austin with 30 set assists.

Allie Macensky and Olivia Rohrbaugh each had 12 kills for Galeton with Macensky also adding eight digs, three blocks, and an ace and Rohrbaugh chipping in 30 digs, four aces, and a set assist.

WARREN, Pa. – After a tough week on the road, Warren volleyball returned to the friendly confines of Joseph A. Massa Gymnasium Tuesday and picked up a 3-0 win over Cathedral Prep.

“I think we ran our offense really well,” Warren’s Alexia Bowers said. “We definitely stepped up tonight. I thought it went really well.”

Warren jumped out to a 5-2 lead to start the first set, but Cathedral Prep battled back to get within a point at 8-7. The Dragons methodically built a 17-13 advantage, then closed the set with an 8-2 run for the 25-15 win.

Cathedral Prep got the early advantage in the second set as the Ramblers built a 7-3 lead. Warren responded with a 6-0 run to go up 9-7. The Ramblers tied the set again at 11-11 but were unable to retake the lead. Again, the Dragons methodically pulled away for the 25-18 win.

The Dragons controlled the third set right from the start, getting out to a 7-3 advantage and never leading by less than four points the rest of the way in a 25-12 win.

“It’s awesome, honestly, the great work effort everyone’s put in,” Bowers said of Warren’s balanced offense. “It makes us all able to hit.”

Sheffield had 11 total kills and 11 total blocks as a team. Defensively, the Wolverines had 35 digs. Emily Foster led the way with 10 digs.

Bella Multari ran the offense for the Hornets with 14 set assists and Kiki Joanow added 12 digs.

Sperry added nine digs and Kulyk seven digs for the Lakers who also got 11 digs from Da’Zhana Jordan and 10 digs from Avery Ollinger.

Anna Merry ran the offense to the tune of 41 set assists for Otto-Eldrd, while Addie Bell chipped in with seven kills, six digs and one block, Katie Rhinehart six kills, and Anna Schuessler five kills.

COCHRANTON, Pa. – It was another easy win for Cochranton, as the Cardinals downed visiting Eisenhower, 3-0 (25-7, 25-11, 25-11) behind nine kills from Devyn Sokol and seven kills, nine digs, and three aces from Taytum Jackson.

Lili Douglas and Ella Gallo each added four kills in the win, and Dana Jackson ran the Cochranton offense with 24 set assists.

Albers had 14 kills and 10 digs for the Beavers with Moore adding 11 kills and 21 digs.

Emilee Ruter led the defense with 33 digs to go along with three aces for Coudy, while Myers added eight aces and three blocks and Whalers 12 digs and four aces.

Regan Mays paced the offense with 22 set assists and three aces, while Leah Exley finished with a team-high 16 kills as Keystone improved to 15-1 on the season.

Thomas also had four aces, while Bailey Varndell had 25 set assists and Madison O’Hara nine kills aces for Maplewood, which improved to 12-1 with the win.

Kayleigh Anderson added nine kills for the Bison who also got eight kills from Katelynn Olmstead.

Becky Whitman led the Fort LeBoeuf defense with 13 digs, while Mackenzie Galdson had 19 set assists and Tessa Bellis 12 set assists in the victory.

Editor’s Note: A previous version of this story had Cranberry winning

Cora Jekielek and Mia Anderson each had seven kills for the Lady Wolves with Maya Smith and Mackenzie Blankenship adding five kills apiece.

All four of those players also contributed on defense with Smith recording seven digs and Jekielek six digs and Anderson and Blankenship a block apiece.

Jaya Persinger ran the offense for the Eagles with 26 set assists, and Brooke Hovis paced the defense with 10 digs.

Lauren Rendos had 10 kills, six digs, and an ace for Brockway with Kalina Powell adding 24 digs and two aces.

Sophia Schmader had 10 digs in the loss, and Savannah Ross ran the offense with 15 set assists while adding five digs and two aces.

Oct. 11 Soccer Recaps: Redbank Valley’s Clouse Sets Program Record for Career Goals in Win
Oct. 12, 2022 Volleyball and Soccer Schedule
This website or its third-party tools process personal data.In case of sale of your personal information, you may opt out by using the link Do not sell my personal information.
×
Manage consent