Not One, Not Two, But Three OTs Go Cameron Co. Boys in Win Over Punxsy; Meadville Needs Mere 1 OT to Beat Redbank Dec. 28 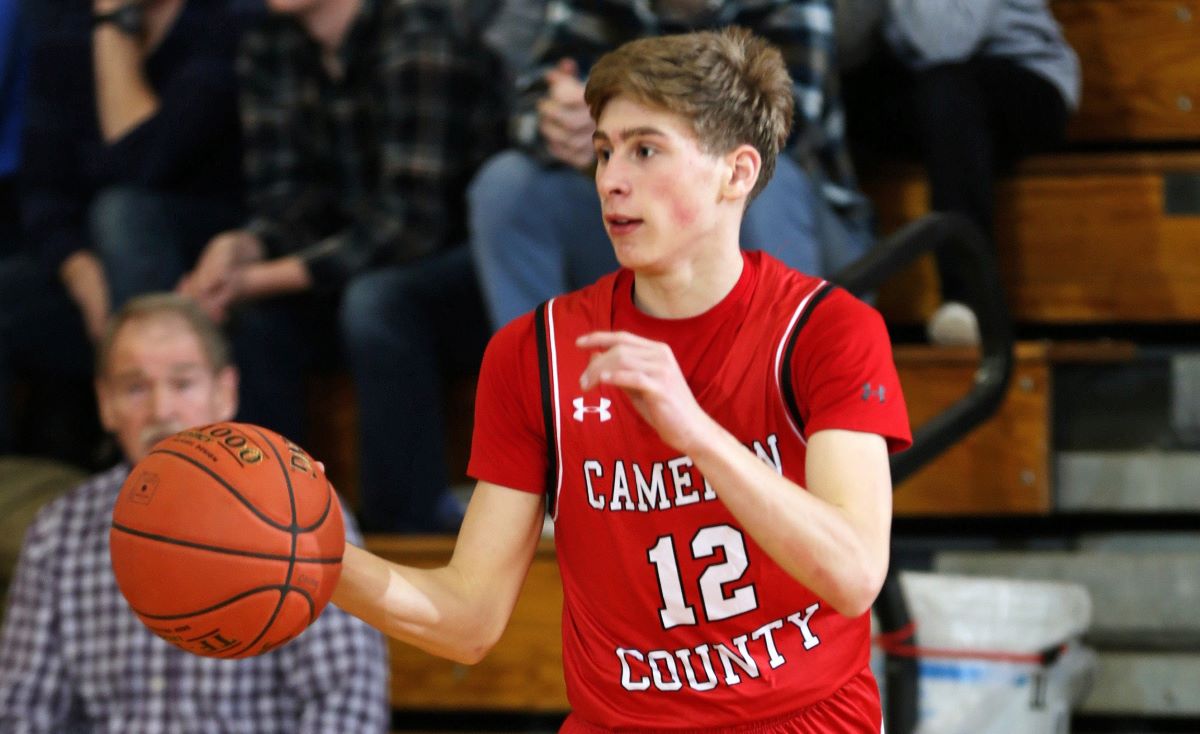 PUNXSUTAWNEY, Pa. – It took 44 minutes, but Cameron County prevailed, 43-42, in triple overtime over host Punxsutawney in the opening round of the Punxsutawney Tournament.

The contest was close throughout with the Red Raiders leading 11-6 at halftime only to watch Punxsutawney outscore them 12-9 in the third quarter to get back within two, 20-18, going to the fourth quarter.

Jimmie Neese led the comeback for the Chucks scoring seven points in the third quarter.

Neese and Cooper Hallman then hit fourth-quarter 3-pointers to help Punxsutawney even the game at the end of regulation.

Camdyn Allison scored all but four of his 14 points in the fourth quarter and the three overtimes, including five overtime points, for Cameron County.

Neese led all scorers with 16 points for Punxsutawney, including 15 from the fourth quarter on, while Hallman scored eight and Noah Weaver seven.

DUBOIS, Pa. – Outscoring DuBois Central Catholic 13-4 in the third quarter, Brookville pulled away for a 45-26 win over the Cardinals in the championship game of the DuBois Holiday Tournament.

The Raiders led 19-13 at the break but got seven points from Kellon Haines in the third quarter to gain separation.

Haines scored 11 of his 13 points in the second half, while Brookville also got 12 points from Jack Pete, nine from Noah Peterson, and seven from Clayton Cook.

FARRELL, Pa. – New Castle outscored Farrell 16-8 in the fourth quarter on its way to a 56-44 win over Farrell in the title game of the Dresch-McCluskey Tournament at Farrell.
Isaiah Boice had a big game for unbeaten New Castle, scoring 20 of his 24 points in the second half, while Nick Wallace was also in double figures with 10 points.

PUNXSUTAWNEY, Pa. – Devon Lauer scored 23 points, hauled down six rebounds, and swiped six steals to lead Clarion to a 67-35 win over Marion Center in the opening round of the Punxsutawney Christmas Tournament.

Gabe Simko had 15 points and eight rebounds for the Bobcats with Bryce Brinkley adding 13 points, seven rebounds, and seven assists.

FARRELL, Pa. – Jack Burchard hit the front end of a one-and-one with 3.7 seconds to play to lift Meadville to a 56-55 overtime win over Redbank Valley in the consolation game of the Dresch-McCluskey Tournament at Farrell.

The game was tied at 50 at the end of regulation and the teams were still tied at 55 in the closing seconds when Burchard was fouled and won the game.

Meadville led 26-23 at halftime before Redbank Valley took a 43-42 lead going to the fourth quarter.

The game was tied at 50 with over a minute left in the fourth, and Meadville missed a late shot in regulation that would have won the game.

Khalon Simmons had a monster game for the Bulldogs with 29 points with Burchard adding 10.

PATTON, Pa. – Cole Miller’s double-double of 21 points and 11 rebounds lifted Clearfield to the championship of the Central Cambria Tournament with a 51-41 win over the host Highlanders.

SHEFFIELD, Pa. – A day after being shutout in the first quarter, Sheffield exploded for 20 first-quarter points on its way to a 61-45 win over Kane in the championship game of the Sheffield Sports Boosters Christmas Tournament.

The Wolverines led 20-9 at the end of eight minutes thanks to eight points from Leihden Wotorson, who finished with 13.

DUBOIS, Pa. – Tyson Kennis and Cam Thompson combined to score 30 points in DuBois’s 52-31 win over Brockway in the consolation game of the DuBois Holiday Tournament.

Kennis led the Beavers with 16 points with Thompson scoring 14. All 14 of Thompson’s points came before halftime, including 11 in the first quarter when he hit three 3-pointers.

Rudy Williams chipped in eight points in the victory.

Alex Carlson led all scorers with 17 points for Brockway.

EC outscored Mercer 27-14 in the second half, with Nathan Williams adding 15 points for the winners.

MERCER, Pa. – Saegertown outscored Mercer 22-12 in the fourth quarter en route to a 66-52 win over Moniteau in the consolation game of the Mercer Tournament.

Brady Greco, who reached the 1,000-point milestone in his last game, had six fourth-quarter points as did Zach Yoder.

Yoder had 18 points, Greco 17, and Henry Shaffer 10 for Saegertown.

Chason Delarosa-Rugg had a game-high 21 points for Moniteau, eight of which came in the fourth quarter.

Aydan Jackson and Colton Thomas added 11 points each for Moniteau.

SHEFFIELD, Pa. – Smethport built a 24-16 halftime lead on its way to a 46-40 win over Youngsville in the consolation game of the Sheffield Tournament.

Preston Alfieri scored 12 of his 16 points in the first half for Smethport, while Hayden Leet added 15 points, eight of which came in the fourth quarter.

Demtris Crosby was also in double figures for North East with 13 points, as the Pickers jumped out to a 12-4 lead after the first quarter en route to the win.

CORRY, Pa. – Rylan Smith knocked down a pair of key free throws with 14 seconds remaining to help lift Corry to a 57-54 win over Southwestern (N.Y.) in the Jim Gruca Tournament final.

Smith finished with 11 points, while Brian Cressley poured in a game-high 21 points for Corry.

CORRY, Pa. – Wyatt Lookenhouse poured in 29 points as Eisenhower earned a 90-71 win over Northwestern in the consolation game of the Corry Tournament.

Eisenhower scored 25 points in both the second and fourth quarters en route to the win.

Franklin led 22-8 after the first quarter and never looked back.

Aidan McCracken added 11 points for Franklin, while Damon Curry and Dreydon Payne added 10 points each for the Knights.

FRANKLIN, Pa. – Ethen Knox led a balanced Oil City effort with 14 points as the Oilers earned a 51-44 win over Fairview.

Cam VanWormer was also in double figures for Oil City, which outscored Fairview by six in the second half, en route to the win.

Chartiers Valley led 21-7 after the first quarter en route to the win, as Drew Sleva was also in double figures scoring with 12 points.

Gavin Lutz scored 21 of his 23 points in the first half for Grove City, while Brett Loughry chipped in with 11 points.

Kristian Mizdail led all scorers with 19 points for Williamson.

WASHINGTON, Pa. – Rylan Dye led a balanced Hickory effort with 13 points as the Hornets earned a 52-41 win over Tinity at the Trinity Tournament.

Tyson Djakovich had 12 points for Hickory, which led 21-15 at halftime, while Aidan Enoch had 10 points.

The Hornets return tomorrow against Canon-McMillan.

The Rockets outscored the Cardinals 13-6 in the second quarter en route to the win.

Perez was 12-of-13 from the free throw line, while Kasen Neely added 13 points for Titusville.

PITTSBURGH – OLSH, which saw its state-record 74-game win streak end last week, earned a 51-39 win against Mercyhurst Prep in the opening round of the Shaler Tournament.

Nick Johnson added 17 points for the Mountaineers who also got 12 from Jacob DeSimone.

The Golden Tide will take on Bald Eagle Area in the consolation game Thursday.

HARBORCREEK, Pa. – Nick Krahe had 24 points and 14 rebounds, but it was Struthers (Ohio) that earned a 62-57 win over the Huskies.

Trey Metzka had 23 points for Struthers.

PITTSBURGH – Sam Himrod scored 12 points and Brandon London 11 to lead a balanced Shaler effort in a 67-34 win over Sharon.