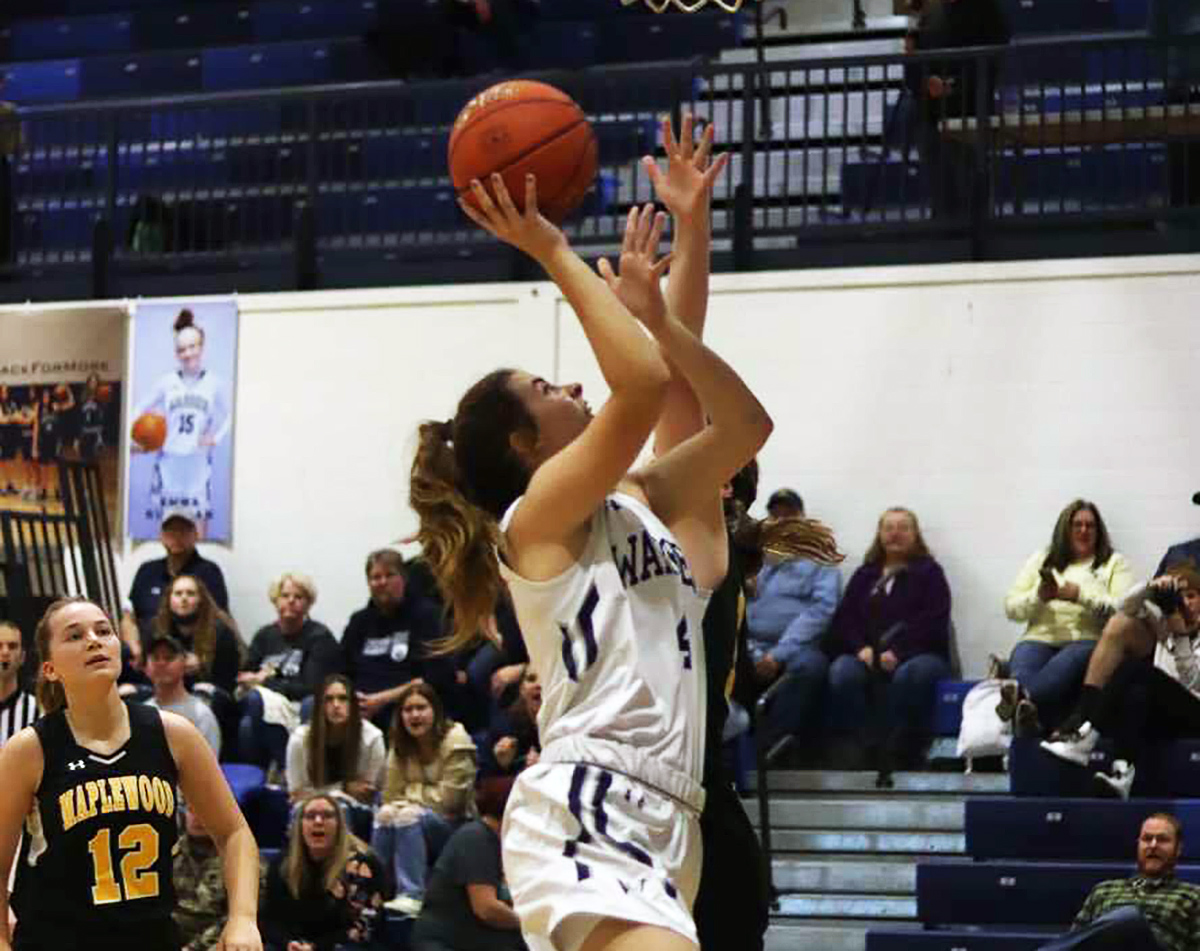 JAMESTOWN, N.Y. – Warren erased a 5-point halftime deficit with a 19-point third quarter on its way to a 57-42 win over Panama (N.Y.) at the JCC Showcase.

The Panthers jumped out to a 19-9 lead at the end of the first quarter, thanks in large part to a 9-point outburst by Josephine Bailey. Warren settled things in the second quarter and outscored Panama, 11-6, to cut the lead to 25-20 at the half.

The Dragons’ offense exploded for 19 third-quarter points, including nine from Sammie Ruhlman. Halle Kuzminski scored seven of her game-high 17 points in the fourth quarter as the Dragons outscored the Panthers, 18-5.

After that 9-point, first-quarter outburst, the Dragons held Bailey scoreless for the rest of the game.

Mandy Brink led the Panthers with 17 points. Bailey had nine points and Kaitlyn Horton had six.

Kuzminski finished with a double-double, grabbing 10 rebounds to go along with her 17 points. Alana Stuart had 12 points, Ruhlman finished with 11, and Meea Irwin had six. Ruhlman and Irwin each dished out five assists.

KANE, Pa. – Lily Homan scored 16 points to help North Clarion to a 44-18 win over Kane in the championship game of the Kane Christmas Tournament.

Tournament MVP Emma McFarland added 10 points for the She-Wolves who also got 12 from Lauren Lutz.

KANE, Pa. – Sophie Babington scored a career-high 20 points to lead Clarion to a 54-16 win over Youngsville in the consolation game of the Kane Christmas Tournament.

Taylor Alston added nine points for the Lady Cats who got eight points each from Gia Babington and Natalie Durish.

BROOKVILLE, Pa. – Twelve different players scored to lead DuBois Central Catholic to an opening round, 66-23, win over Brockway at the Brookville Holiday Tournament.

BROOKVILLE, Pa. – Madison Rusnica scored 13 points, and DuBois scored all its points in the first three quarters on its way to a 42-23 win over host Brookville in the opening round of the Brookville Holiday Tournament.

Rylee Werner and Kamryn Fontaine each added six points for the Lady Beavers.

CALIFORNIA, Pa. – Alivia Huffman and Mylee Harmon both cracked the 20-point mark, as Redbank Valley rolled past Rockwood, 80-24, on the second day of the PennWest California Hoopfest.

Zank scored 13 of her 15 points in the first half, while Brooke Przybylski had seven points for Harbor Creek.

The Oilers trailed 14-13 at halftime but outscored the Berries 13-9 in the third quarter to take the lead.

FARRELL, Pa. – In a game that was called with 3:11 to go in the fourth quarter due to an incident on the Farrell bench, Cambridge Springs beat the host Steelers 48-25 in the tournament title game.

Makenzie Yanc had a strong overall game for Cambridge Springs, scoring a game-high 26 points to go along with six rebounds, six assists, and eight steals.

Finley Rauscher was also in double figures for Cambridge Springs with 12 points.

Cambridge Springs outscored Farrell 28-6 in the second half en route to the win.

FARRELL, Pa. – Alex Gallagher scored eight points to help Meadville to a 31-14 win over A-C Valley in the consolation game of the Dresch-McCluskey Tournament at Farrell,

FAIRVIEW, Pa. – Alaina Rodermoyer knocked down 3-of-4 free throws down the stretch and North East held off a furious General McLane rally to earn a 51-50 win in the Fairview Tournament.

General McLane outscored North East 23-16 in the fourth quarter, but the Pickers were able to seal the game from the free throw line.

FAIRVIEW, Pa. – Hope Garrity led a balanced effort with 13 points as Fairview earned a 47-13 win over Seneca in the Fairview Tournament.

Fairview led 30-5 at halftime, as a total of nine different Fairview players made their way into the scoring column.

Eisenhower raced out to a 14-0 lead in the first quarter and never looked back.

STONEBORO, Pa. – Tori Kimpan led a balanced effort with 11 points as Sharpsville earned a 49-39 win over Lakeview in the Lakeview Tournament title game.

Slippery Rock jumped out to a 16-8 halftime lead en route to the win.

NEW CASTLE, Pa. – Laurel went on a 14-5 run in the third quarter en route to a 47-31 win over Grove City in the Laurel Tournament.

HERMITAGE, Pa. – Grace Cano scored 20 points as Greenville earned a 48-44 win over defending PIAA Class 2A champion Neshannock in the first round of the Sally Ward Classic at Hickory.

Greenville won despite the best efforts of Neshannock’s Marian Haggerty scored 26 points. Megan Pallerino was also in double figures for Neshannock with 11 points.

HERMITAGE, Pa. – Kimora Roberts was on fire, pouring in 32 points as Hickory earned a 58-41 over Fort LeBoeuf in the Sally Ward Classic.

Hickory jumped out to a double-digit lead, 20-9 after the first quarter en route to the win.

Mariah Swanson was also in double figures for Hickory with 13 points.

Jillian Soder did her best to keep Fort LeBoeuf in the game with 27 points.

Pizza Hut Scoreboard: Dec. 28, 2022: D9/10 Basketball
Not One, Not Two, But Three OTs Go Cameron Co. Boys in Win Over Punxsy; Meadville Needs Mere 1 OT to Beat Redbank Dec. 28
This website or its third-party tools process personal data.In case of sale of your personal information, you may opt out by using the link Do not sell my personal information.
×
Manage consent