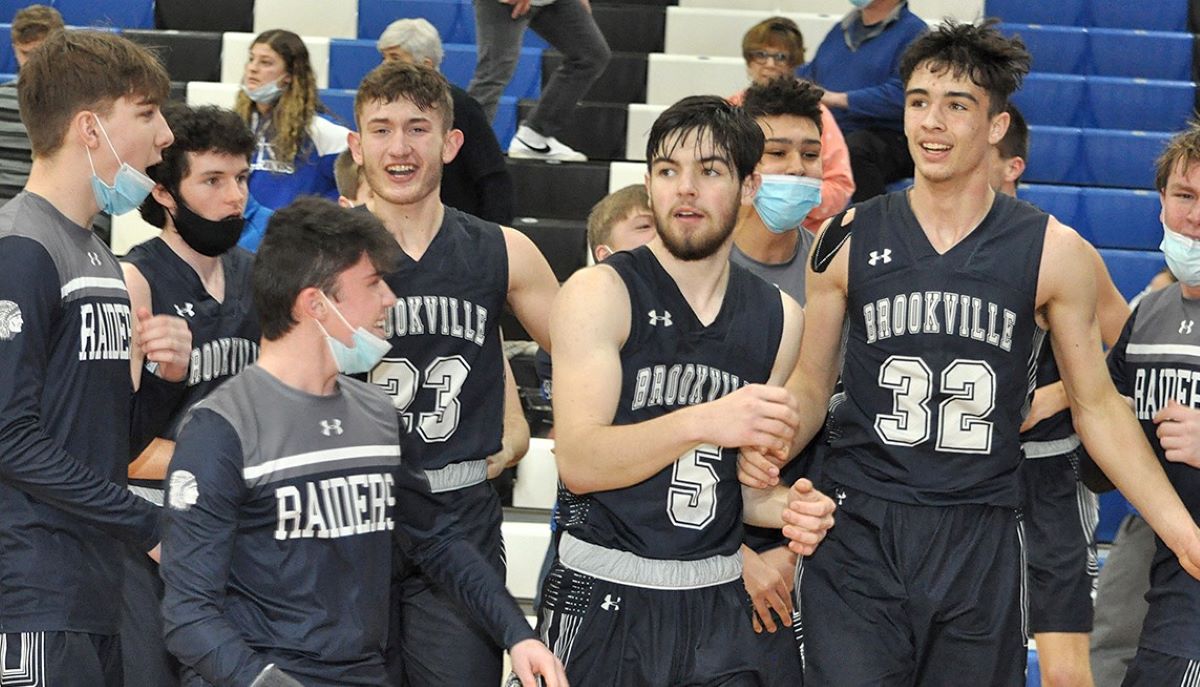 ELLWOOD CITY, Pa .- Words really don’t do justice to what Jace Miner did in the final 13 seconds of Brookville’s 62-60 win at WPIAL Class 3A champion Ellwood City that sent the Raiders to the PIAA semifinals for the first time in school history.

So let’s just go to the tape courtesy of ECTV Presented on ECS.

What you just watched up there was Miner jumping an inbounds pass from Ellwood City’s Joseph Roth that was intended for Stephen Antuono, then cutting to the hoop and breaking a 60-all tie with a layup with 9.4 seconds to play.

Knowing that the Wolverines still had time to tie or win the game, Miner picked up his man, Antuono, in the halfcourt, went with him as Antuono drove the lane, blocked Antuono’s potential game-tying shot and then hauled in the rebound to send the Raiders into Tuesday’s semifinal game with Bishop Guilfoyle.

Watch the layup and the blocked shot.

An astute observation from Miner led to the game-winning steal.

“I noticed No. 35 (Roth) really wasn’t looking at me,” Miner said. “I figured, hey if we are going to end, let’s end on something to remember. I went for that (steal). Obviously, I got it. I am still shaken up. I really can’t explain it.”

Brookville head coach Dalton Park realized it was a do-or-die play for his team.

“I saw Jace creeping up,” Park said. “I thought, oh no, if he misses it (Antuono) is gone and it’s over. He didn’t miss it. My goodness, what a play to end it.”

Miner’s heroics came during a strange sequence of events that started after Miner missed the second free throw of a two-shot foul with 51 seconds to play – his make on the first shot had tied the game at 60.

Antuono grabbed the rebound for Ellwood City but dribbled the ball out of bounds with 48.4 seconds to play.

Watch the sequence leading up to the steal until the timeout

That timeout proved to be costly when Milo Sesti tried an inbounds pass to Roth, who was guarded by Brookville’s Lauer and Griffin Ruhlman, and the ball was knocked out of bounds.

One official said it was still Ellwood City basketball, but after conferencing with his fellow official the call was changed giving Brookville the basketball with 25.5 seconds left.

Watch the inbounds pass get knocked out of bounds

After getting the ball across halfcourt, Brookville called timeout.

But disaster struck for the Raiders when Hunter Geer couldn’t handle a pass from Robert Keth giving the ball back to Ellwood City with 13.2 to play.

“That was interesting,” Miner said. “I have never played a basketball game that way. There were times we were up and then it was down. It felts like every 10 seconds we were up and down, up and down. We had that turnover right at the end, and we were all kind of down at that point.”

Following the turnover with 13.2 seconds left, Park was just hoping for overtime.

“I thought for sure they were going to go score or we are going to overtime,” Park said. “One or the other.”

The ending put a bow on what was an incredible final eight-and-half minutes of basketball that saw the game tied five times and the lead change hands six times from the 36-second mark of the third quarter until the end of the contest.

Brookville led by four, 45-41, following a Danny Lauer fastbreak layup off a Miner steal and assist with 1:36 to play in the third quarter.

But the Raiders tried to slow the pace down at the end of the quarter, and it cost them.

A steal and two free throws by Alexander Roth cut the lead to 45-43 with 36 seconds left then Geer missed a shot and Antuono scored with 2.1 seconds left to send the game to the fourth quarter tied at 45.

Brookville hit two of the first four baskets of the final eight minutes to go ahead 49-4 on a Ruhlman layup with 6:45 to play.

The teams then exchanged layups with Geer putting Brookville back in front before Joseph Roth scored to give the lead back to Ellwood City, 52-51, with 5:04 left.

Brookville answered with four straight points on a Miner layup and two Keth free throws to go back in front, 55-52, before Samuel DiCarpio’s layup brought the Wolverines back within one, 55-54, with just under four minutes to play.

Alexander Roth then split a pair of charity shots at the 3:03 mark to tie the game at 55 before Minner hit two foul shots with 2:29 left to put Brookville back up by two.

Alexander Roth then stole the ball from Keth and was fouled 84 feet from the basket with 1:01 to play. He hit the first free throw of a one-and-one but missed the second giving Ellwood City the lead back one last time, 60-59.

Miner, though, was fouled trying to drive to the baseline with 50.9 seconds left and hit the first free throw before missing the second following an Ellwood City timeout, to tie the game at 60.

Despite leading non-stop from the 2:57-mark of the second quarter until just before the third-quarter buzzer, Brookville never got separation from Ellwood City with the biggest the lead ever getting being six points twice early in the third quarter.

“Both teams played a smart game,” Park said. “Overall, it was a pretty well-played game.”

In the first half, Ellwood City relied almost entirely on Joseph Roth, a 6-foot-4-inch freshman who is also a state champion swimmer. Roth scored 17 of the Wolverines 29 points in the opening half while also hauling down 10 rebounds before halftime.

The Raiders then were able to contain Roth in the second half limiting him to just three shots and five points and three rebounds giving him a team-leading 22 points to go with a game-high 13 rebounds.

“We switched defenders (on him late) in the first half and slowed him down a little there,” Park said. “When we were in the locker room (at halftime) we kept the switch that was there and we designated a couple of guards that were on a certain few guys to drop and plug that.”

While Brookville’s defense changed slowed Roth down, it did open up things for Antuono and Alexander Roth, Joseph’s older brother.

Those two combined for 22 second-half points with Antuono scoring 12 and Alexander Roth 10 while both hit a pair of 3-pointers helping the Wolverines go 4 of 6 from beyond the arc after halftime after shooting 0-for-8 from long range in the first half. Antuono finished with 18 points with Alexander Roth scoring 14.

But while Ellwood City was getting secondary scoring in the second half, Brookville turned to its star, Miner, and the senior delivered scoring 17 of his game-high 28 points after halftime while pulling down eight of his 12 rebounds in the second half. He also had four steals and two blocked shots.

With Miner attacking the rim, Brookville, which was outscored 28-18 in the paint in the first half, outscored Ellwood City 24-12 inside in the second half.

Jace Miner dunking in the first half

Geer and Ruhlman both chipped in nine points for Brookville with Keth and Lauer scoring six apiece.

“I don’t know how to explain it,” Park said of reaching the PIAA semifinals. “I am just happy. It’s bonus basketball. Anything we get from here is great. I am not going to be disappointed win or lose. Obviously, I want to win. Anytime we step on the floor, we want to win. But, I am not going to be disappointed either way. And that’s the way we are going to practice, hopefully loose. Guys, we’ve got nothing to lose, and see what we can do.

The semifinal game will be Tuesday. If the PIAA sticks to its brackets with the team on the top end of the bracket being the home team – something they haven’t always done – Brookville will host that game.

“Not at all,” Miner said when asked if he could imagine getting the semifinals at the start of the year. “There are a lot of things we couldn’t imagine going into the season. If you had told me at the beginning of the season that we would be going into the semis now, I would be like I think it can be done but we will see how it goes. There is a lot happening right now that I definitely didn’t see coming.”

NOTES – While Brookville had never been to the PIAA semifinals until this year, a school that is now part of the Brookville School District, Sigel, made it in Class C in 1948. Class C, is the modern equivalent of Class 1A … Brookville joins fellow District 9 school Clarion (Class 1A) in the semifinals. It is the first time two D9 boys’ teams have been in the semifinals in the same year since 2004 when Bradford (Class 3A) and Johnsonburg (Class 1A) both made the semifinals. It is just the fourth time since 1964 two D9 teams have made the semifinals in boys’ basketball in the same season. In 1964, Coudersport (Class C) and Punxsutawney (Class A, which was the largest classification at the time) did so. Also, in 1992 Elk County Christian – now Catholic – in Class 1A and Punxsutawney in Class 4A made the semifinals. The feat was also accomplished in 1947 (Bradford in Class A and Karns City in Class B), in 1948 (Kane in Class A and Sigel in Class C), and in 1949 (Kane in Class B and Penn Township (Butler County) in Class C). The interesting thing about Penn Township in 1949 was it won the semifinal game but there was no state championship game in Class C.

Villa Girls Outlast Beaver in Overtime in Class 4A; Coudy Drops Heartbreaker to Bishop Guilfoyle in Class 1A
March 22, 2021 District 9 and District 10 PIAA Semifinal Schedule
We use cookies on our website to give you the most relevant experience by remembering your preferences and repeat visits. By clicking “Accept All”, you consent to the use of ALL the cookies. However, you may visit "Cookie Settings" to provide a controlled consent.
Cookie SettingsAccept All
Manage consent