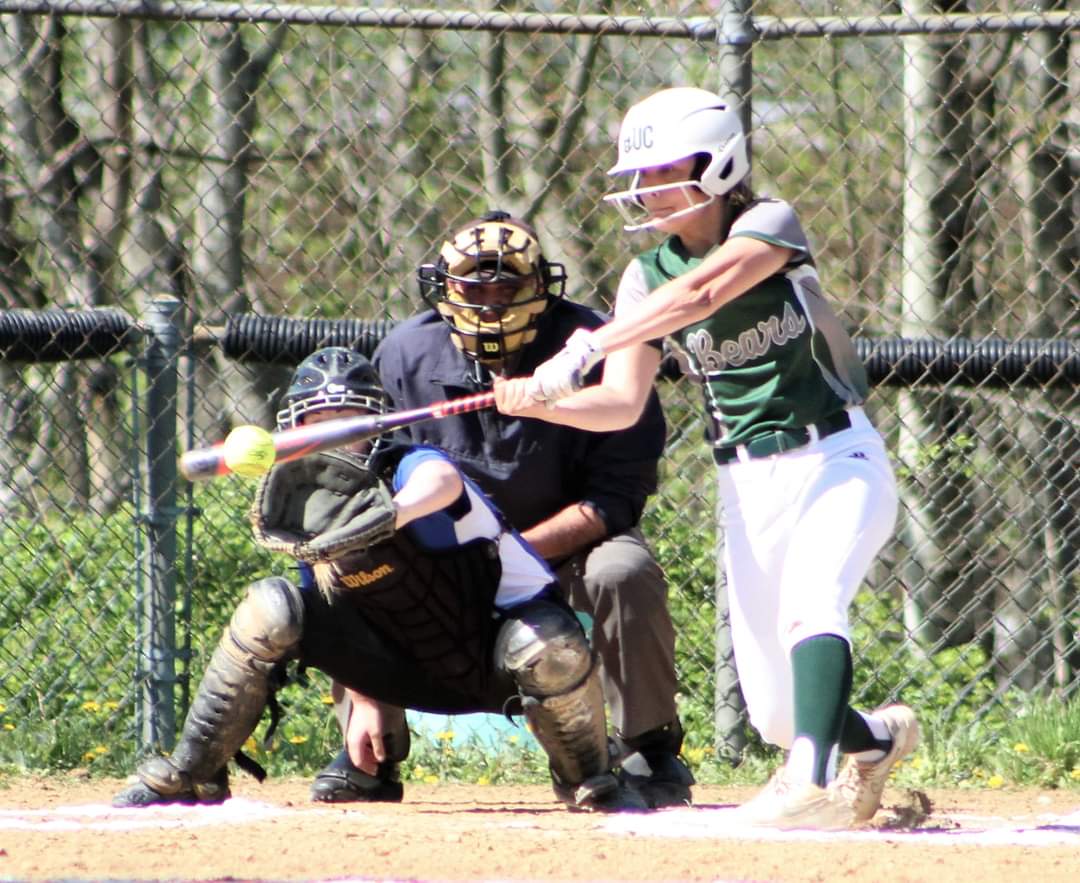 UNION CITY, Pa. – Union City notched 15 hits and Abby Tingley pitched a 1-hitter as the Bears remained perfect with a 15-0 win over Maplewood.

The Bears scored five runs in both the first and third innings.

Eliza Reynolds was 2-for-3 with two doubles, two runs, and an RBI, Emylee Zielinski 4-for-4 with a double, two RBIs, and four runs, Sydney Gilbert 3-for-3 with three RBIs, and Cathryn Reynolds 1-for-2 with two runs and an RBI. Rienna Higley and Kamryn Gates-Bowersox had one RBI each.

Tingley allowed just one hit and didn’t issue a walk.

Slippery Rock scored five runs in the third inning. Gresgott belted an RBI triple in the third and Dakota Burns an RBI double. The Rockets also had three runs cross the plate on Oil City errors.

Caitlin Kunsman was 2-for-4 with two RBIs, while Gresgott and Burns also had two hits and Sam Meredith drove in a pair.

Nyssa Hanlon was 1-for-4 with two RBIs for Oil City and Mara Martinec drove in a run.

Lizzy Hoovler took the loss. Only three of her runs allowed were earned.

COCHRANTON, Pa. – Cambridge Springs built a 4-run lead and held off a late Cochranton rally for a 7-6 victory.

An RBI single off the bat of Kenzie Lewis got Cambridge Springs going, and an error allowed them to extend their lead to 3-0 in the second inning.

Taylor Smith went 2-for-4 with two RBIs and Lewis all drove in a pair.

Hailee Rodgers got the win, allowing two earned runs in seven innings on nine hits. She struck out seven.

A 2-run, 2-out double off the bat of Megan Heim cut the deficit to one in the seventh, but Rodgers was able to induce a strikeout to end the game with Heim stranded on second.

Chloe Lippert was 1-for-2 with two RBIs for the Cardinals. Taytum Jackson took the loss, allowing three runs (one earned) in three innings, striking out three.

ERIE, Pa. – Warren scored two runs in the fourth inning and Kelsey Stuart made that hold up, as the senior allowed just one unearned run in a 2-1 Dragon victory.

McDowell took a 1-0 lead in the first inning on a Lexxie Biel RBI single, but the Dragons responded with RBI singles from Carly Beers and Ellee Irwin.

Alivia Soule took the loss, allowing eight hits and striking out four without issuing a walk in her seven innings.

FAIRVIEW, Pa. – Taylor Polach and Jenna Hanas drove in two runs each as Fairview rolled to a 10-2 win over Girard.

Polach finished with three hits, including a triple, as the Tigers scored in every inning but the first.

Cami Munson got the complete-game win, allowing just three hits and striking out 14.

GROVE CITY, Pa. – Franklin plated four runs in the fourth inning on its way to a 7-4 win over Grove City.

Gabriella Wimer had a 2-run single in the fourth, Kirsten Hicks an RBI single and a sacrifice fly off the bat of Sydni Hoobler.

Hoobler finished 2-for-3 with a double and three RBIs, while Wimer also drove in a pair.

Trinity Edge got the win, allowing one earned run in her seven innings on six hits, striking out 11.

HARBORCREEK, Pa. – Harbor Creek collected 11 hits and scored six runs in the second inning in a 13-0 win over Conneaut.

Haiden Manning got the win, allowing one hit in three innings and striking out eight. Alayna Mosbacher pitched two innings, striking out five.

Genest got the win, allowing nine hits and striking out three.

Alayzha McCray took the loss, allowing 16 hits and nine earned runs. Gracie Belfiorie was 3-for-3 with an RBI and a run.

The Victors scored four runs in both the first and sixth innings.

Hayley Dever was 3-for-5 with two RBIs and two runs, including a pair of doubles. Caitlyn Plyler was 2-for-4 with four RBIs and Annabella Cipalla and Rylee Kregal 2-for-4 with an RBI each.

Jenna Wagner got the complete-game win, striking out 13 and allowing just four hits without issuing a walk.

Madelyn Hilson took the loss, allowing 10 hits and striking out six. Only four of her runs allowed were earned.

MERCER, Pa. – Taylor Truan’s 2-run home run in the fifth inning gave Mercer a 3-2 lead in what was ultimately a 4-2 victory over Wilmington.

Amanda Bish followed later in the inning with a solo blast for the Mustangs.

Bish was also the winning pitcher, surrendering nine hits and two walks while striking out six in the complete-game effort.

Wilmington led 2-1 going into the bottom of the fifth on an RBI groundout from Faith Jones and an Ella Kraup RBI single.

Makenna Gordon allowed just one hit and struck out seven in getting the win.

Catherine Abbate drove in a run for Mercyhurst Prep.

Halyn Cawthorne belted two of those home runs and Mackenzie Herman and Kylie McAdoo both sent balls over the fence as well. Cawthorne finished with four RBIs. Herman also had three hits.

Rylee Gearhart got the win. She struck out eight in her three innings of work.

Ava Gilmore was the losing pitcher, allowing 10 runs on 10 hits.

The Panthers scored four runs in the fourth inning and three in the fifth. Faith Cox was 2-for-2 with a triple and four runs. Serennah Peterson and Ava Jenkins drove in a pair of runs each.

Cox got the win, allowing just two hits and striking out nine.

Alaina Suhar was 2-for-3 with a run for the Panthers.