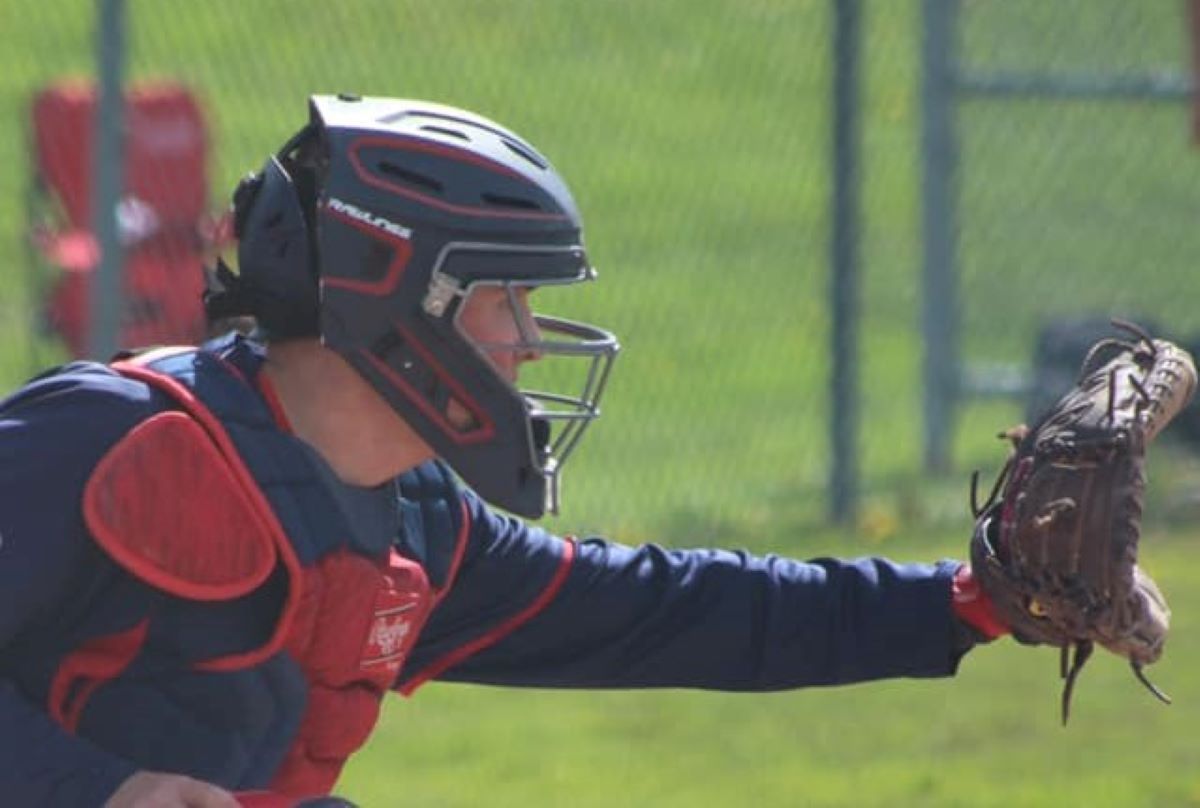 Ben Gritzer had a two-run single in the seventh inning to break a 3-all tie in DCC's win at Brockway Tuesday. Photo by Carlie Gritzer

BROCKWAY, Pa. – Scoring five runs in its final two at-bats, including three in the top of the seventh, DuBois Central Catholic rallied past Brockway, 6-3.

The Cardinals trailed 3-1 going to the sixth but tied the game on a Cartar Kosko two-out RBI single.

Ben Gritzer’s two-run single in the seventh then broke the tie, and DCC added an insurance run on a Dante Armanini sac fly.

Damon Foster had a double and was 1-for-4 for the Cardinals, while Armanini went 1-for-3 with an RBI and two runs scored.

Marcus Bennett was 1-for-2 with a run scored and an RBI for Brockway with Ben Glasl going 1-for-3 with a walk and an RBI.

Kaden Brezenski got the win in relief of Carter Hickman. Brezenski went 2 ⅔ innings of scoreless ball allowing three hits and a walk while striking out two.

Kosko came on and got the save striking out one in his inning of work.

Hickman pitched 3 ⅓ innings giving up three earned runs on a hit and five walks while striking out four.

Slaugenhoup threw a three-hit shutout using just 82 pitches in seven innings. He struck out three and didn’t walk a batter while helping Clarion to its second 2-0 win of the season.

Slaugenhoup was just slightly better than Redbank Valley’s Bryson Bain, who gave up two unearned runs on three hits, four walks, and a hit batter in six innings of work. He struck out four.

JOHNSONBURG, Pa. – Kaden Dennis scored on an error in the bottom of the sixth inning, as Johnsonburg rallied past visiting Kane, 4-3.

The unbeaten Rams (14-0) trailed Kane and Wolves star pitcher Carson Whiteman, 3-0, going to the bottom of the fourth but scored a run in the fourth before tying the game with two runs in the fifth on a Camron Marciniak double and an Ethan Wells single.

Luke Zimmerman and Colin Porter made sure the four runs were enough with Zimmerman getting the win going six innings allowing three earned runs on five hits, two walks, and a hit batter while striking out six.

Porter then hit a batter in the seventh but also struck one out and used just nine pitches to get the save.

Whiteman took the loss allowing four runs, three earned, on six hits, a walk, and two hit batters while striking out 10. Harley Morris went a ⅓ of an inning throwing just one pitch, as the out was recorded on the base paths.

All six of Johnsonburg’s hits came from three batters.

BROOKVILLE – Clearfield broke open a one-run game with a six-run fifth inning and went on to beat homestanding Brookville, 15-4.

The Bison led 4-3 going to the fifth before getting to Brookville starter and loser Jamison Rhoades, who faced five batters in the fifth and didn’t retire one of them.

Also for the Bison, Karson Rumsky went 1-for-5 with two runs scored and two RBIs, Blake Prestash walked once, scored twice, and drove in two runs, Kyle Elensky was 1-for-4 with a walk and two runs scored, and Shane Coudriet scored twice.

Rhoades paced Brookville on offense going 3-for-3 with a double, an RBI, and two runs scored, while Carson Weaver was 2-for-3 with an RBI.

Hunter Dixon got the win going seven innings allowing four runs, one earned, on six hits and a walk while striking out four.

The game was scoreless until the fifth when the Gators pushed home a pair of runs on a two-run single by Isaiah Caden.

Cole Sebastian hit a three-run home run in the seventh to account for the Otto-Eldred offense. He was 1-for-4. Max Splain also went 2-for-4 for the Terrors.

Sawyer Prince got the win going six scoreless innings allowing two hits, three walks, and a hit batter while striking out nine before reaching the pitch limit with 101. Drew Evens gave up three runs, all earned, on two hits, a walk, and a hit batter in an inning of relief.

Jacob Merry took the loss going five innings allowing two runs, one earned, on five hits and a walk while striking out eight.

Sebastian was roughed up for six runs, five earned, on six hits and a walk while striking out five in two innings of relief.

DUKE CENTER, Pa. – Otto-Eldred rebounded nicely from the loss to Port Allegany to beat visiting Cameron County, 13-1, in five innings in the Terrors second game of the day.

Splain got the win going five innings allowing an unearned run on two hits and two walks while striking out seven.

Six different Hubbers had hits led by Travis Cooney, who was 2-for-3 with a double.

That was more than enough run support for Brandon Higley and Alex Ognen.

Gavin Sykora hit a home run for Galeton and was 1-for-2 with an RBI and a run scored. Tre Slawson was 2-for-4 for the Tigers, and Levi Evans went 1-for-3 with two RBIs.