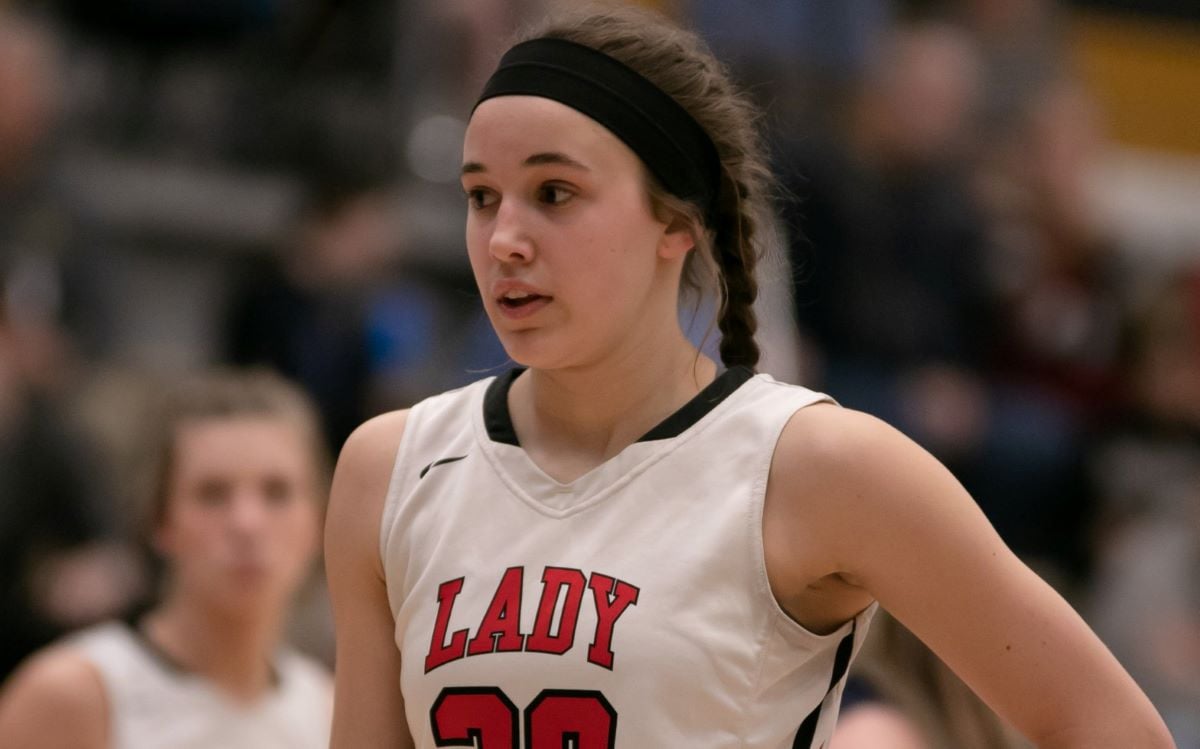 Powell was followed with 23.1 seconds left and the game tied at 43 but missed both shots.

Raegan Gelnette got the rebound for the Lady Rovers and quickly passed the ball back to Schmader, who hit the jumper to give Brockway the lead.

Brookville had a chance to tie or win the game at the horn, but the Lady Raiders weren’t able to get a shot off.

Powell also scored seven points for Brockway, who had lost, 54-33, to Brookville eight days ago in the consolation game of the Brookville Holliday Tournament.

The game turned in the third quarter when Brockway outscored Brookville 10-5.

HYDE, Pa. – Down one at halftime, Clearfield used an 18-8 third-quarter advantage to secure a 60-50 home win over Bellefonte in Mountain League action.

The Lady Bison trailed 25-24 at the break but rode the play of Cayleigh Walker in the third quarter to a 42-33 lead by the end of the quarter.

Walker scored 12 of her career-high 26 points in the third quarter.

Riley Ryen then salted the game away by going 13 of 16 from the free-throw line in the fourth quarter. Ryen was 15 of 18 from the line in the game on her way to a career-high 23 points.

Mia Helsel chipped in 10 points in the win.

BRADFORD, Pa. – Izzy Catalone hit four 3-pointers on her way to a game-high 18 points, as St. Marys hit the road and came away with a 50-16 win over Bradford.

Alexa Schneider added 12 points for the Lady Dutch who also got eight apiece from Jayssa Snelick and Maura Caskey.

EMPORIUM, Pa. – Visiting Coudersport got 16 points from Sierra Myers on its way to a 49-24 NTL victory over Cameron County.

Bel Porterfield chipped in nine points for the Lady Falcons with Emma Chambers and Emilee Ruter each scoring seven points.

Also for Smethport, Abby Lutz scored 11 points while going 7 of 11 from the free-throw line.

Addy Reigle led Galeton with 12 points thanks to four 3-pointers.

SHINGLEHOUSE, Pa. – Evin Stauffer came a point away from a double-double while helping Port Allegany pick up a 31-16 road win over Oswayo Valley.

Hartle scored 11 of her points in the first quarter to help the She-Wolves to a 22-5 lead at the end of one which became 40-11 by halftime.

NEW BETHLEHEM, Pa. – Mylee Harmon scored 16 of her game-high 29 points in the first quarter, as Redbank Valley rolled to a 77-16 home win over Forest Area.

Behind Harmon’s opening-quarter explosion, the Lady Bulldogs led 31-4 at the end of eight minutes.

Alvia Huffman added 15 points in the victory and freshman Adyson Bond scored a season-high 13 points, all in the first half.

The Lady Warriors were up 19-12 at the break but outscored the Lady Cats 15-8 in the third quarter and 20-5 in the fourth quarter.

Sophie Babington had 13 points for Clarion.

Michael Jacobs and Jordan Wasko each added seven points for the Crusaders.

Luke Swisher had 18 points for DCC.

KANE, Pa. – Sheffield outscored Kane 38-23 over the second and third quarters to break the game open en route to a 60-49 win at Kane.

The Wolves held an 8-6 advantage after the first quarter, but the Wolverines scored 20 in the second and 18 in the third to go up 44-31 heading to the fourth.

Connor Finch scored eight of his 16 points in the second quarter, while Leihden Wotorson was steady across the final three frames with five points in each on his way to a team-high 17. Lucas McNeal was also in double figures with 11 points. Finch added eight rebounds as well.

Kane’s Sam Lundeen finished with a game-high 18 points. Ricky Zampagna had 11, and Scott Szymanski and Brock Wensel had six each.

Tanner Fox scored eight of his game-high 16 points in the opening quarter to pace the fast start for St. Marys.

Anthony Nedzinski added 10 points for the Dutch to help overcome leading scorer Qun Gavazzi being held to four points, all in the second half.

Jake Frantz and Chase Wineberg both scored 12 points for Bradford.

Jack Benninger added 13 points for the Elkers who also got nine tallies from Alex Merritt.

Gavin Lutz poured in 22 points for Grove City, eight of which came in the fourth quarter.

Nathan Greer and Brett Loughry were both in double figures for Grove City with 15 points each.

Klawuhn, Strong Second Half Help ECC Girls Down DCC on the Road
Jan. 7, 2023 District 9 and District 10 Basketball Schedules Powered by Hunter’s Station Golf Club
This website or its third-party tools process personal data.In case of sale of your personal information, you may opt out by using the link Do not sell my personal information.
×
Manage consent