Klawuhn, Strong Second Half Help ECC Girls Down DCC on the Road 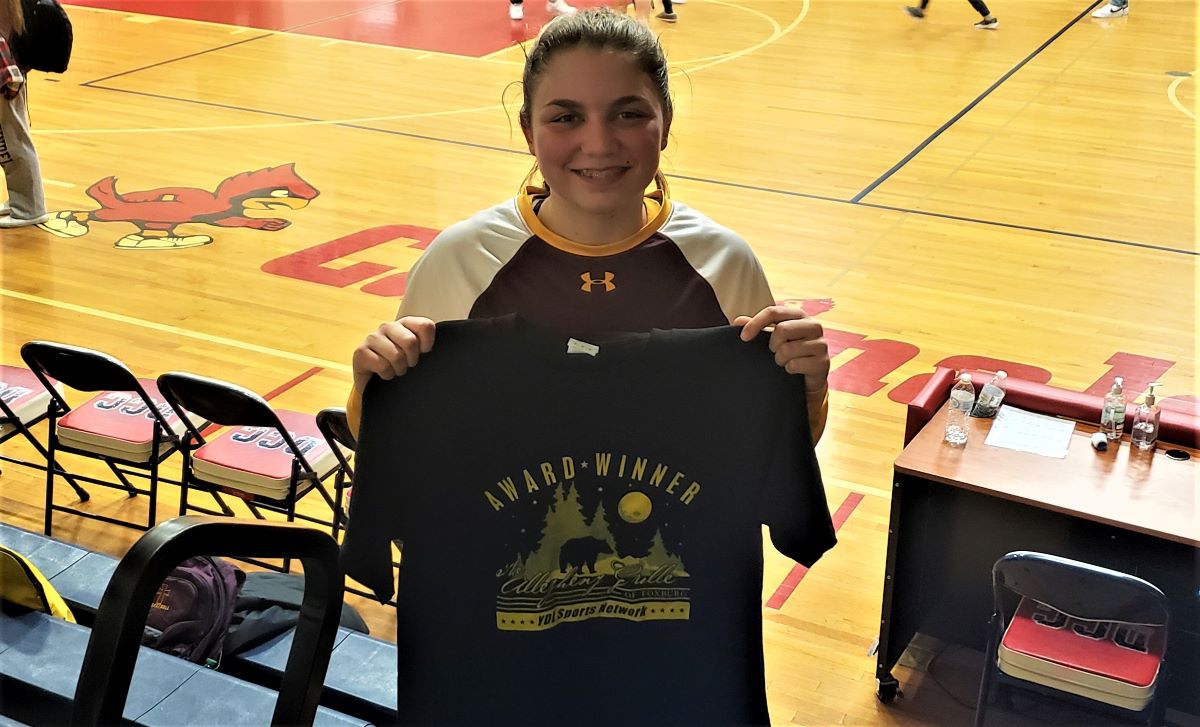 Lucy Klawuhn scored 12 of her game-high 18 points in the second half to help ECC beat DCC. She was named the Allegheny Grille of Foxburg Player of the Game. Photo by Chris Rossetti

DUBOIS, Pa. – With the game tied at 25 to start the second half, visiting Elk County Catholic went on a 9-0 run right out of the gate on its way to a 46-34 win over DuBois Central Catholic in AML Crossover action.

Tori Newton and Lucy Klawuhn both scored buckets in the first 30 seconds of the second half to fuel the run that put ECC ahead, 34-25, 3:10 into the second half.

“We need to start playing as a team, start cutting harder, and play better defense, and help on weakside more, and just start rotating around on defense,” Klawuhn said was the message ECC head coach Ken Pistner gave his players at halftime. “Us going on a spree right there, it really helps us gets more confidence and actually play as a team. It just helps us a lot.”

It was Klauwhn, who hit four 3-pointers inthe game on her way to a game-high 18 points, who had the game’s back-breaking shot at the end of the third quarter. .

DCC had gotten back within four, 34-30, late in the third quarter when ECC held for the last shot of the quarter.

Klawuhn delievred that shot with 0.4 of a second left in the form of a corner 3-pointer from in front of her bench to put the Lady Crusaders up 37-30 going to the fourth quarter.

“So, we ran out play called ‘Geno’,” Klawuhn said. “They pass the ball over to the wing, and I come out off the screen. I just get the ball, and I know there is not much time left and I have to shoot it. So, without that screen and those good passes, I would have never got that shot. I am going to thank my teammates for that.”

The screen was set by none other than Newton, as Klawuhn traversed across the baseline from the right corner to the left corner before taking a pass from Syd Alexander.

The fact so many different players were involved in that key play probably best sums up ECC’s offense, as anyone can beat you at any time.

“We have all big scorers on the bench and off the bench,” Klawuhn said. “Everybody scoring really helps us and really motivates us. We all support our players, and we love it.”

Watch all of the postgame interview with Klawuhn, who was named the Allegheny Grille of Foxburg Player of the Game after scoring 12 of her 18 points in the second half.

DCC, playing without second-leading scorer Faith Jacob (ankle injury) came out flying using a full-court pressure defense and great inside play from Emma Elensky to take a 17-9 lead at the end of the first quarter.

Elensky scored eight of her team-high 13 points in the first quarter.

But the full-court press created a disadvantage for DCC as well with the Lady Cardinals picking up seven fouls in the opening quarter, including two each on Kayley Risser and Elensky.

That forced DCC head coach Jordan Hoover to go a bit more conservative with the press allowing ECC to get back in the game by outscoring the Lady Cards 16-8 in the second quarter behind a pair of Klawuhn 3-pointers and five points from Sami Straub, who scored eight of her 10 points in the first half while also facilitating a lot of the offense from her point guard position.

Straub and Newton both added 10 points in the victory.