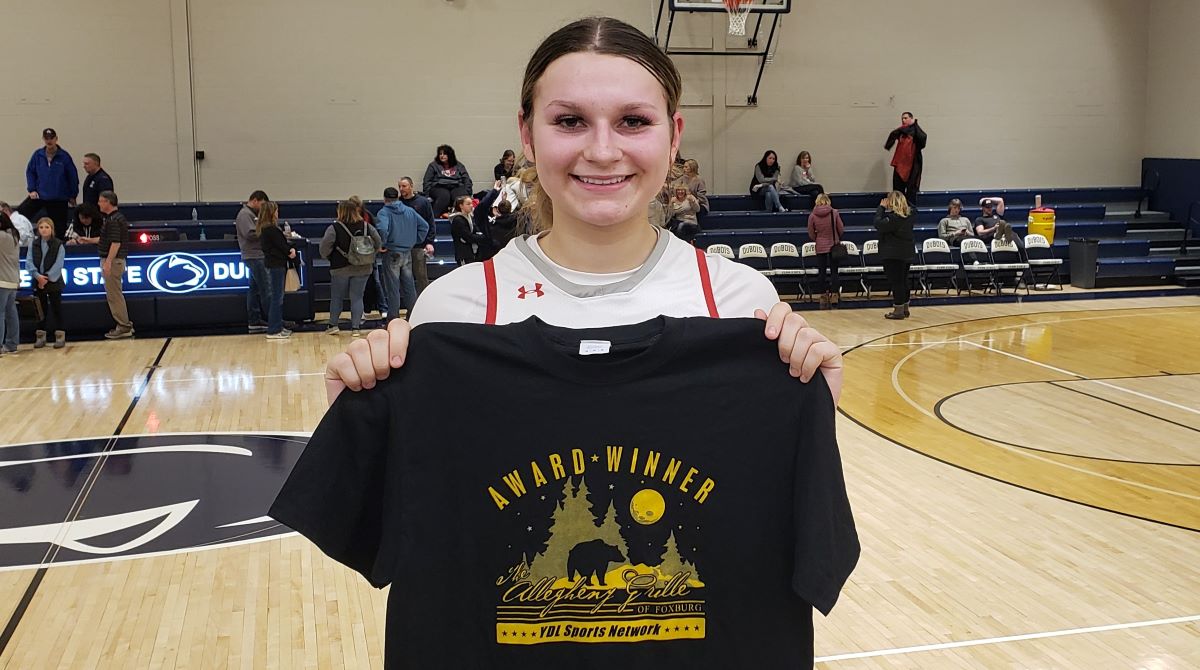 DUBOIS, Pa. – Using an 11-0 third-quarter run, Redbank Valley turned a two-point third-quarter lead into a 56-38 win over DuBois Central Catholic at the PAW Center on the campus of Penn State-DuBois.

The Lady Bulldogs led 31-29 following a basketball by DCC’s Emma Elensky with 5:23 left in the third quarter.

That basket ended an 8-0 run for the Lady Cardinals who trailed 31-21 50 seconds into the second half after perhaps the Daddy’s in Clarion Dish of the Year from Mylee Harmon to Alivia Huffman for Redbank Valley.

Redbank Valley had the answer thanks the Harmon.

The sophomore scored five points during the 11-0 run that pushed the Lady Bulldogs back out in front by double digits, 42-29, with Ady Bond’s basket with 1:01 left in the third quarter being the final two points of the run.

The score was 44-33 going to the fourth quarter, and six points from Alivia Huffman helped put the game away.

Huffman had a huge all-around game for Redbank Valley with a triple-double with 14 points, 15 rebounds, and 10 steals while also adding four blocks and four assists. She was named the Allegheny Grille of Foxburg Player of the Game and talked about the win.

Harmon led the Lady Bulldogs in scoring with 24 points while adding six rebounds and four assists.

Straub and Emily Mourer talked about the win.

Oswayo Valley led 16-5 at the half en route to the win, as Eva West added five points.

Lilly Clinger had 11 points and five steals for Austin.

DUBOIS, Pa. – DuBois limited Warren to eight points in the second half en route to a 35-20 win in D9/10 crossover action.

DuBois led 16-12 at halftime and outscored the Dragons 19-8 in the second half.

Pfeufer talked about the win.

Alyssa Farr had five points for Warren and Sammie Ruhlman and Halle Kuzminski four points each.

RIDGWAY, Pa. – Jenna Kasmierski had 22 points and six rebounds to lead Ridgway to a 50-28 win over visiting Johnsonburg.

Gabby Amacher added a double-double with 15 points and 11 steals for the Lady Elkers.

Ella Lindberg had 13 points for Johnsonburg.

SHINGLEHOUSE, Pa. – Connor Finch exploded for a career-high 28 points to go with six blocked shots, five rebounds, and two steals to lead visiting Sheffield to a 73-36 win over Oswayo Valley.

Johnson made 12 two-point field goals and was 6-of-6 from the free-throw line.

Skyler Roxbury had 19 points for Union.

Warren outscored DuBois 24-16 in the second half en route to the win.

Braylon Barnes was also in double figures for the Dragons with 12 points (10 in the second half) and Konnor Hoffman added nine.