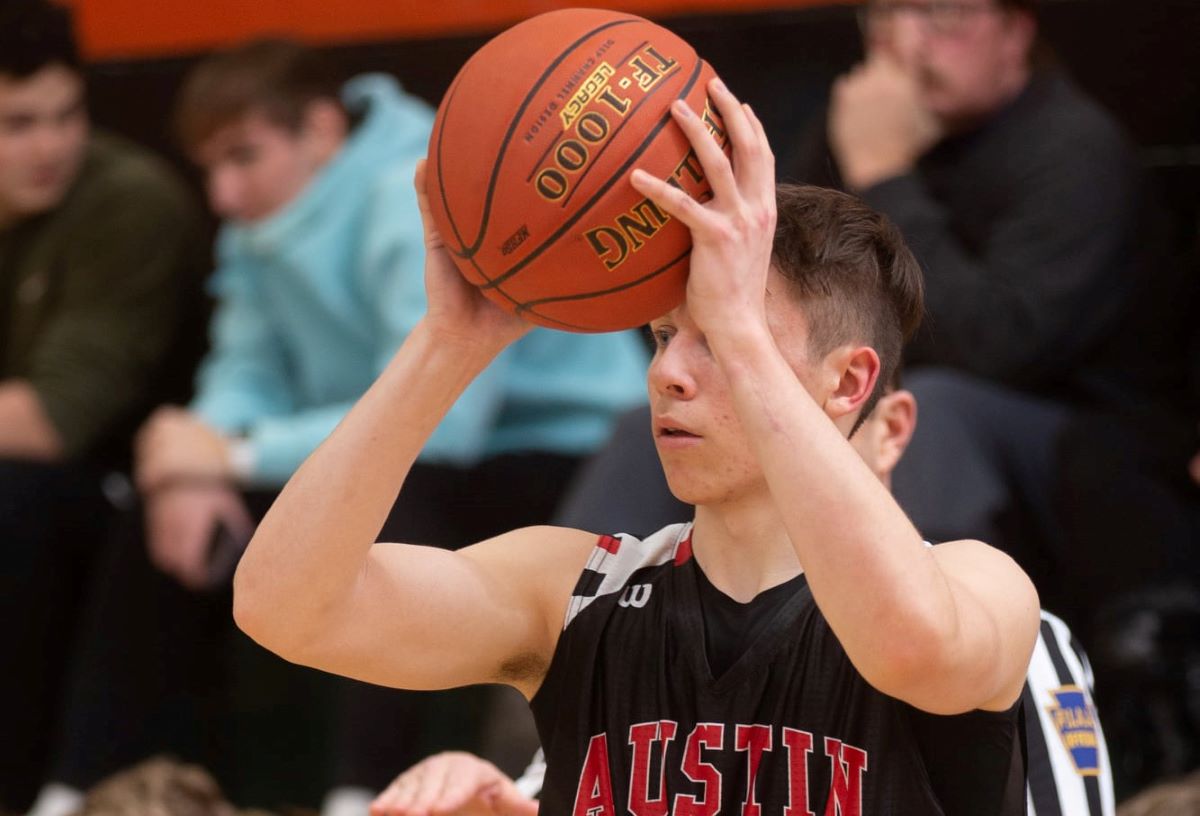 The Panthers led 37-33 going to the fourth quarter, and Hooftallen made sure the lead stuck.

It was a monster game for Hooftallen with 24 points and 18 rebounds.

The Cardinals trailed 29-26 at the break but got a pair of Marek Hoyt 3-pointers and four points each from Luke Swisher and Andrew Green to take a 44-36 lead into the fourth quarter.

Skyler Roxbury had a career-high 25 points for Union surpassing his previous best mark of 20 in a season-opening win over Brockway this season.

Dawson Camper went up the ladder for 18 rebounds for the Golden Knights while adding a pair of points with Zander Laughlin chipping in 12 points, six rebounds, and three assists and Trey Fleming adding five assists, three steals, and four points.

PUNXSUTAWNEY, Pa. – Jimmie Neese scored six of his nine points in the fourth quarter to help Punxsutawney pull away from visiting North Clarion, 57-48.

The Chucks led by two, 43-41, going to the fourth quarter before outscoring the Wolves14-7 in the final eight minutes.

Ryen Heigley had a big night for Punxsutawney with 24 points with Noah Weaver adding 10 tallies.

Aiden Hartle had his seventh game of 25 of more points for North Clarion with a game-high 27 points. Ethan Carll added nine tallies for the Wolves.

Zampogna led the Wolves with 16 points with Darr adding 13.

Sam Lundeen chipped in nine tallies and Scott Szymanski had eight for Kane.

Brax Caldwell, meanwhile, scored a career-high 19 points in the victory for the Terrors, who had four players reach double digits.

PORT ALLEGANY, Pa. – Blasting out to a 38-9 halftime lead, Port Allegany rolled to a 54-22 NTL win at home over Smethport.

The Gators were up 20-2 at the end of the first quarter thanks to seven points from Blaine Moses and five from Jett Rudding.

Braylon Button then scored six points and Drew Evens and Noah Archer added five each in the second quarter for Port Allegany.

Button had a double-double for the Gators with 11 points and 11 rebounds with Moses adding nine points and six rebounds and Evens eight points.

Noah Archer dished out four assists and scored five points in the win as well.

EMPORIUM, Pa. – Josh Smith had a career-high for the second straight game to help Cameron County to a 69-41 NTL win over visiting Galeton.

Smith, fresh off a 17-point performance in a win over Coudersport Saturday, had his first career 20-point game with a game-high 21.

Camdyn Allison added 15 points in the win for the Red Raiders, who led 34-22 at halftime before outscoring the Tigers 24-11 in the third quarter behind eight points from Smith and six from Allison.

Maddox Baughman chipped in 12 points in the victory, and Landon Farren added 10 points for the Red Raiders.

BOLIVAR, N.Y. – A 19-point effort by Ayden Sisson helped Bolivar-Ricbburg (N.Y.) send Coudersport back across the border emptyhanded thanks to a 69-42 win for the home team.

Even Pinney added 17 points in the win.

Reilly Streich had another nice night for Coudersport with 19 points with Mason Roessner adding 12 tallies.

Elizabeth Hungiville had a double-double for Smethport with 16 points and 10 rebounds while also adding two assists.

Madison Peterson added 16 points in the win for the Vikings.

Greenville Girls Outlast Wilmington; Cambridge Springs, Sharpsville Nab Wins Jan. 23, 2023
Double Trouble: Cook has Double-Double to Lead Brookville past Karns City in Battle of Top D9 Boys Teams
This website or its third-party tools process personal data.In case of sale of your personal information, you may opt out by using the link Do not sell my personal information.
×
Manage consent