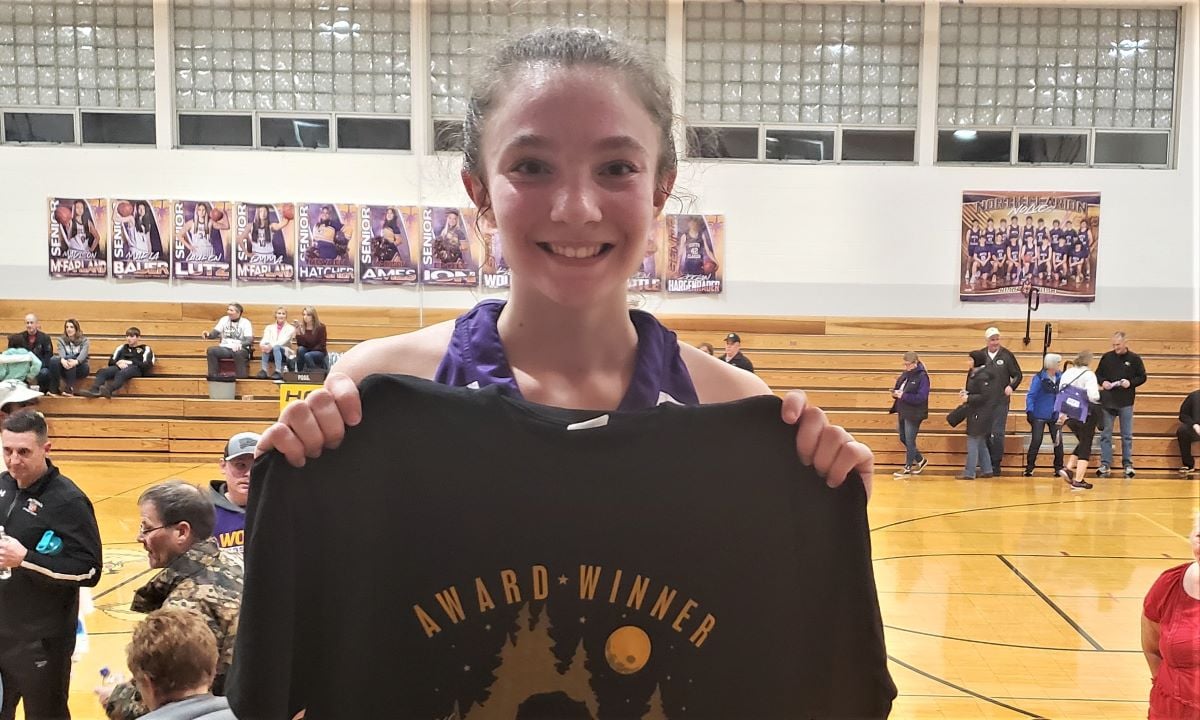 Lily Homan had 23 points to lead North Clarion to a win Wednesday. Photo by Chris Rossetti

FRILLS CORNERS, PA. – North Clarion built a 14-point lead heading to the fourth quarter before holding off a furious Karns City rally for a 51-47 home win.

But Chloe Fritch hit a pair of 3-pointers to help Karns City get back within six, 51-45, with about 43 seconds left.

Fritch had a monster game for Karns City with 28 points.

But Lily Homan had a big game for North Clarion with 23 points while being named the Allegheny Grille of Foxburg Player of the Game.

Homan, whose 23 points were a season-high, talked about the win.

North Clarion trailed early in the second quarter, 13-8, before rallying to take a 25-17 halftime lead thanks to a monster second quarter by Homan, who scored nine points in the quarter with Lauren Lutz in foul trouble with two and on the bench.

Karns City pulled back within single digits in the third quarter before a late run in the frame helped North Clarion get the lead back to double digits at the end of the quarter,

Homan was again the catalyst scoring eight more points in the quarter.

Fritch was at her best early and late scoring 10 first-quarter points (all 10 for the Lady Gremlins in the frame) and then adding 11 more in the fourth quarter.

JOHNSONBURG, Pa. – Mallory Smith hit a free throw in the final minute of regulation and then scored four of Brockway’s five overtime points in a 34-31 overtime win at Johnsonburg.

Smith scored seven points and had five rebounds in the best game of the freshman’s season.

PORT ALLEGANY, Pa. – Port Allegany gave visiting Otto-Eldred all it could handle before the Lady Terrors pulled away in the fourth quarter for a 50-38 win in NTL action.

Also for the Lady Terrors, Merry had eight points and five rebounds.

SHINGLEHOUSE, Pa. – Layken Enty had 10 points and five rebounds to lead Oswayo Valley to a 45-15 win over visiting Galeton.

COUDERSPORT, Pa. – Emma Chambers led a foursome of Coudersport players in double digits with 18 points in a 63-25 win over visiting Smethport.

Winters drilled five 3’s and scored 16 points with Bowser scoring 13 of her 17 points in the first half as Keystone built a 39-8 lead.

RIMERSBURG, Pa. – Mylee Harmon scored 16 of her game-high 27 points in the first quarter to help visiting Redbank Valley roll to a 58-17 win over Union.

Behind Harmon, the Lady Bulldogs led 21-3 at the end of the first quarter.

CLARION, Pa. – Taylor Austin had 15 points to lead Clarion to a 46-29 win over visiting Cranberry.

Jadyn Shumaker had a double-double for Cranberry with 10 points and 10 rebounds.