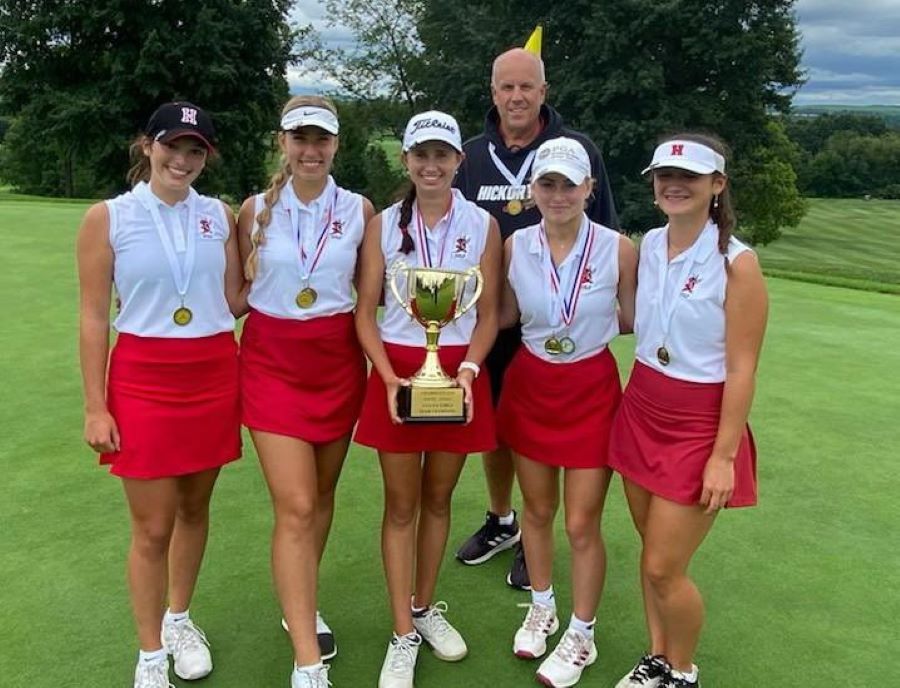 The Hickory girls golf team captured the Jerry Roman Invitational for the second year in a row. Photo HSD Athletics.

BELLE VERNON, Pa. – The Hickory girls golf team picked up right where they left off last season, capturing the Jerry Roman Memorial Invitational for the second year in a row.

The Lady Hornets had a team score of 321, led by Sasha Petrochko’s three-under 68. Luciana Masters followed with a 75, Ava Liburdi an 85, and Ava Miklos a 95.

Peters Township finished second with a team score of 339.

Cathedral Prep was the other District 10 team competing and finished third with a team score of 400. Anna Zinram carded an 81 for the Ramblers, while CeCe Morgan had a 98.

CLARION, Pa. – Led by a 38 from Lucas Mitrosky, Clarion took first in the first KSAC mega match of the season at Clarion Oaks.

Clarion swept the top four spots, as Kam Kerle and Devon Lauer both shot 40 and McKayla Kerle a 42.

SLIPPERY ROCK, Pa. – Trent Nemec shot a 77 and Tyler Hamilton a 78 to lead Grove City to its second Region 2 victory in as many tries on Monday at Slippery Rock Golf Club.

Grove City had a team total of 327, as Ethan Cunningham shot an 84 and Logan Goodrich an 88.

Jacob Wolak shot a 70 for the host Rockets, posting the low round for the second time in as many tries in region play.

Caden Bender shot a 79 and Luke Mild an 82 for West Middlesex, which finished second in the team standings at 332.

Slippery Rock was third at 357, while Wilmington was fourth at 380, led by Kaitlyn Hoover’s 82. Sharon finished fifth at 416 and Sharpsville sixth at 456.

Erie High’s Kyle Westfall was second overall with a 71, followed by Warren’s Braddock Damore, who carded a 73.