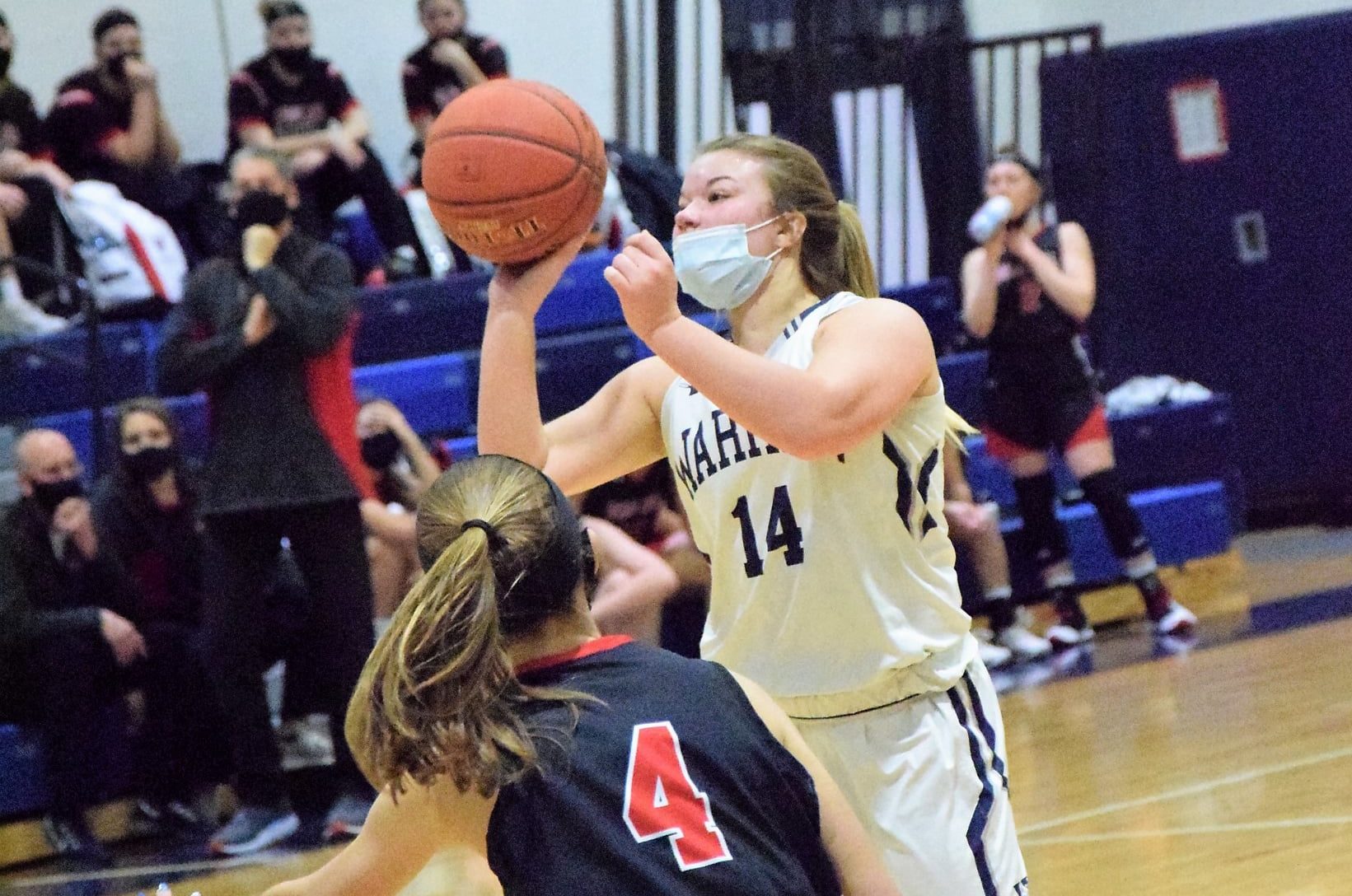 Leading by two at halftime, the Lady Dragons outscored DuBois 25-22 in the second half en route to the win.

Stuart was named the Allegheny Grille of Foxburg Player of the Game and talked about the win afterward:

Gracie Ruhlman scored 10 points in the win for the Lady Dragons, while Riley Childress finished with nine and four steals.

Saige Weible scored eight of her game-high 14 points in the second half for DuBois, while Olivia Johnson had seven points and Abby Guiher six for the Beavers.

Caroline Zentis had eight points for the Tigers, who saw 11 different players make their way into the scoring column.

Maggie Minick and Keira Croyle each added eight tallies for the Golden Damsels in the win.

Alyssa Wiant chipped in 11 points for the Lady Lions while Kendall Dunn and Lexi Coull each netted seven.

Alissa Bailey added seven points and Caylen Spano and Oliva Kulyk six each for the Lakers.

WARREN, Pa. – Ben Berdine scored 27 points as Warren pulled away in the second half for a 63-48 win over DuBois.

Berdine scored 18 points in the first half and seven more in the fourth quarter to help the Dragons, who led by one, 26-25 at halftime.

Parks Ordiway made five 3’s on his way to a 19-point performance for the Dragons.

OIL CITY, Pa. – Holding visiting Clarion to nearly 30 points below its season average, Oil City pulled away from the Bobcats in the fourth quarter to pick up a 56-46 win.

Clarion entered the game averaging 74.2 points per game, including 88 per game over its last three but was held to a season-low by the Oilers.

Oil City led by one, 43-42, going to the fourth quarter but held Clarion to four points in the final eight minutes, all from the free-throw line.

Judias Johnson scored eight of his game-high 20 points in the fourth quarter for the Oilers, while Holden Stahl added 13 points and Isaiah Aeshbacher nine.

Cal German led Clarion with 18 points, but was held scoreless in the fourth quarter, while Beau Verdill added 15 points while going 8 of 8 from the free-throw line. Verdill added seven rebounds with Hunter Craddock grabbing a team-best nine boards to go with eight points.

Up six at halftime, the Cardinals outscored the Sailors 14-5 in the third quarter to take control.

Anthony Grim had nine points and Hunter Miller nine for the Sailors.

SLIPPERY ROCK, Pa. – Homestanding Slippery Rock received 12 points from Dylan Gordan, including 10 in the second half, as the Rockets beat A-C Valley.

Hunter Geer added 11 points for the Raiders who also got eight apiece from Robert Keth and Griffin Ruhlman. Ruhlman chipped in seven rebounds.

Trailing by four at halftime, the Greyhounds outscored Freedom 25-19 in the second half to secure the win.

The Golden Eagles trailed by seven going into the fourth quarter, but outscored the Blue Devils 21-12 over the final eight minutes.

Elijah Harden had 15 points for KC.

James Thomas led Sharpsville with 23 points and Mack Staunch had 19.

Daunte Wilcott and Peter Zimmerman scored nine points each for the Lakers.

James Sitter had 13 points, Logan Frazao 12 and Tyler Shultz 10 for the Tigers.

The Royals outscored the Huskies by 12 in the third quarter to take control of the game.

Peyon McElhinny added 14 points and Cam Keyser 13 for the Muskies.

PITTSBURGH – Jonah Book led McDowell with 22 points in a 54-40 win over Baldwin.