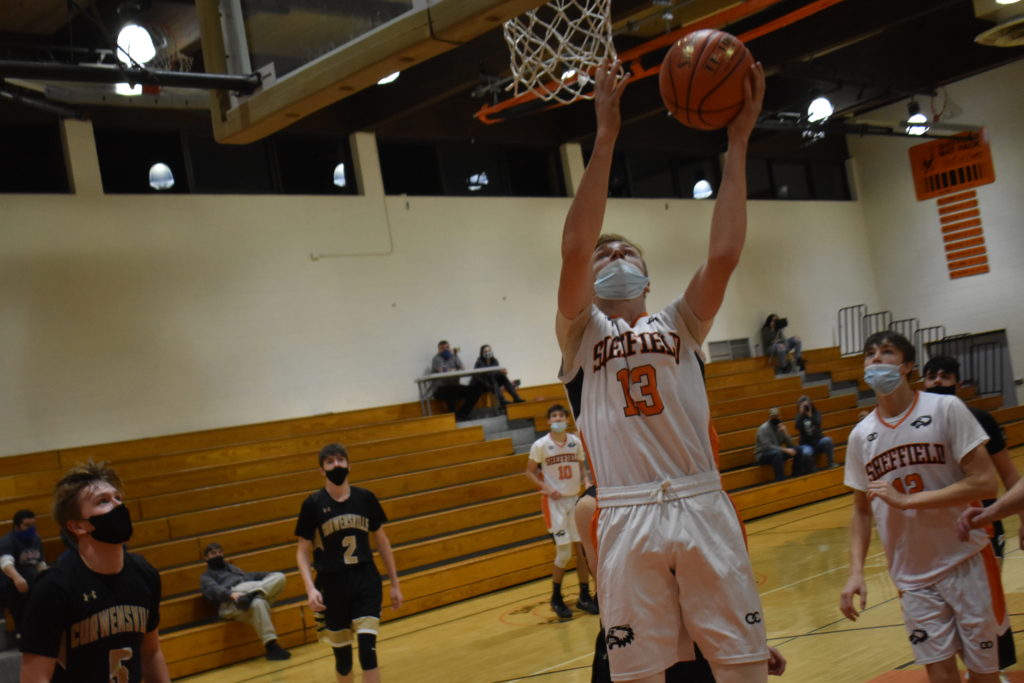 BROCKWAY, Pa. – Tyler Hepinger and Tony Richards combined to score 30 points, as Sheffield picked up a 45-38 road win over Brockway.

Hepinger led the Wolverines with 17 points, including seven in the fourth quarter, while Richards added 13 points while point 6 of 6 from the free-throw line in the final eight minutes.

WEST SUNBURY, Pa. – Clarion started the fourth quarter on a 22-2 run to take a one-point game going to the final eight minutes and turn it into a 22-point, 82-60, road win over Moniteau.

The Bobcats, who led by as many as 17 in the first half and by 16, 43-27, early in the second half found themselves up by just one, 52-51, going to the fourth quarter after Moniteau, behind three Kyle Pry 3-pointers, had finished the third quarter on a 24-9 run.

But Beau Verdill and Hunter Craddock took over in the fourth quarter combing for 18 of Clarion’s 30 points in the quarter led by 10 from Verdill and eight from Craddock.

Craddock, who had a double-double of 17 points and 11 rebounds and was named the Allegheny Grille of Foxburg Player of the Game, talked about the victory.

Pry, who hit six 3-pointers in the contest, had a game-high 24 points for Moniteau with Quinton Scriven adding 16 points.

KARNS CITY, Pa. – Cole Sherwin hit a pair of third-quarter 3-pointers to help fuel a 17-point Karns City advantage in the third quarter, as the Gremlins broke open a one-point halftime lead and turned it into a 62-46 win over visiting Keystone.

Karns City led 23-22 at halftime but outscored the Panthers 23-6 in the third quarter with freshman Luke Cramer adding five points and Nathan Waltman and Chase Beighley four points each in the frame.

Waltman had a double-double of 20 points and 10 rebounds to go with six assists to lead the Gremlins, while Kramer added 14 points, Beighley nine points and eight rebounds, and Sherwin nine points. Micah Rupp climbed the ladder for a game-best 14 rebounds while also scoring four points.

FRILLS CORNERS, Pa. – Hayden Callen scored nine of his game-high 23 points in the fourth quarter, as Clarion-Limestone broke open a tie game after three on its way to a 67-57 win at North Clarion.

The squads, who were tied at 30 at halftime, were deadlocked at 47 after the third quarter before Callen, who finished with a double-double thanks to 10 rebounds while adding four blocks, helped turn the tide for the Lions.

Riley Klingensmith added six of his 13 points in the fourth quarter for C-L going 4 of 5 from the free-throw line.

HOLLIDAYSBURG, Pa. – Visiting DuBois got four 3-pointers from Jordin Summers, who scored a game-high 17 points, on its way to a 59-48 win over Hollidaysburg.

Bryson Bain added 26 points, 13 rebounds, and six assists in the victory for the Bulldogs who also got 20 points from Marquese Gardlock and four points and eight rebounds from Owen Magagnotti.

JOHNSONBURG, Pa. – Cameron Stelene led a balanced Johnsonburg attack with 16 points to lead the Rams to a 59-29 win over visiting Austin.

SMETHPORT, Pa. – Alex Ognen scored 20 of his game-high 22 points in the third quarter to lead Smethport to a 55-26 win over visiting Galeton.

Layne Shall added 13 points for the Hubbers who also got six points and 14 rebounds from Chase Burdick. Eleven of Burdick’s boards were on the offensive end.

ULYSSES, Pa. – Dylan Poorman scored a game-high 16 points to help Port Allegany to a 58-19 win over Northern Potter, the Gators’ first victory of the season.