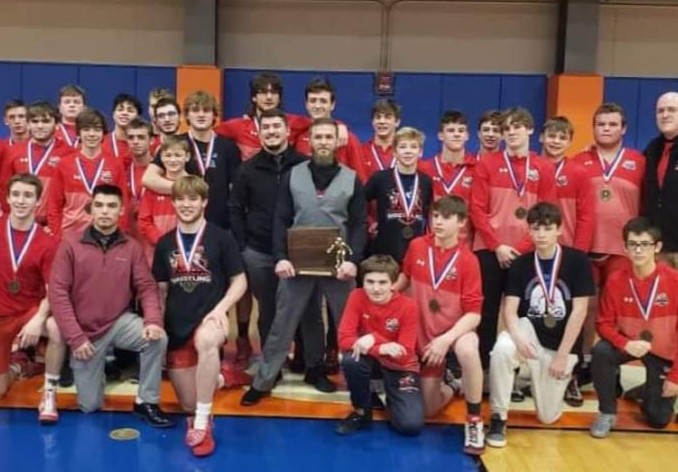 ERIE, Pa. – General McLane knocked off McDowell in the semifinals and Cathedral Prep in the final to win the D10 Class 3A team wrestling crown on Wednesday.

This marks the fourth team title for the Lancers’ program and the first since 2015, rallying from a 25-0 deficit in the process.

The Lancers will now compete in the first round of the PIAA team championships on Feb. 10 at the GIANT Center in Hershey.

Wilson Spires (285), Jessi Stempka (215), Brandon Dedrick (189) won by fall for the Lancers, while the Lancers also got a trio of forfeit victories and a 7-4 decision from Daniel Mulligan at 160.

McLane also received a pair of forfeits, as well as a 10-0 major decision from Teige Berger at 11 and an 8-2 decision from Christian Gillette at 132.

CORRY, Pa. – Corry got three pins and three forfeits in a 54-9 win over Northwestern in the first round of the District 10 Class 2A team duals.

Gabe Lopez won via a 3-2 decision at 126 for Northwestern, which also received a forfeit win.

With the win, Corry moves on to face Sharon in the quarterfinals on Saturday (the semifinals and finals are also on Saturday at Sharon).

Feb. 2, 2022 D9 Girls Hoops: Wood, Buttery Lead Brockway Past Union; Chambers Has Career-High for Coudy in Win
Feb. 2, 2022 D9 Boys Hoops: DuBois Gets Huge Win Over ECC; Clarion Holds off NC; DCC Wins on OT Buzzer Beater
This website or its third-party tools process personal data.In case of sale of your personal information, you may opt out by using the link Do not sell my personal information.
×
Manage consent